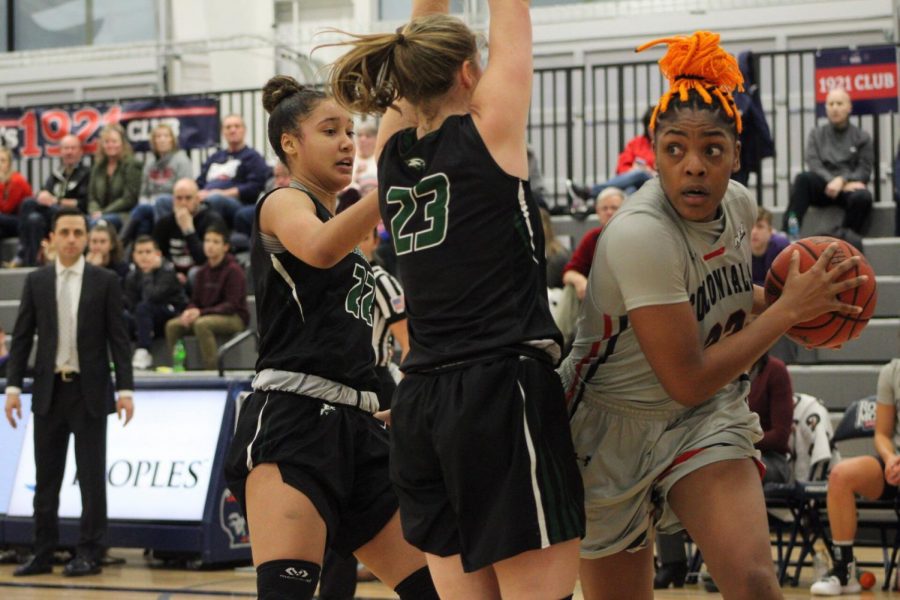 MOON TOWNSHIP -- Nneka Ezeigbo looks to drive to the hoop against Wagner on January 26, 2019 (Michael Sciulli/RMU Sentry Media). Eziegbo had a career night as she finished with a double-double of 13 points and 17 rebounds. Photo credit: Samuel Anthony

MOON TOWNSHIP — The Robert Morris Colonials (10-8, 7-0 NEC) dominated in a win against the Wagner Seahawks (5-13, 3-4 NEC). Robert Morris ran away on the back of junior Nneka Ezeigbo who finished the game with 13 points and 17 rebounds in the contest.

The Colonials’ deadly combination of great defense and solid offense was nowhere to be found in the onset of this game. Wagner jumped out to a quick five-point lead. A three from sophomore Honoka Ikematsu opened the scoring for the Colonials. Senior, Nia Adams made her second free throw and Nneka Ezeigbo added a layup. Robert Morris then found themselves in front with a score of 6-5.

Then the Seahawks took over. Wagner used, what seemed to be, the rest of the first quarter on a 9-2 scoring run. RMU, however, wouldn’t go into the second quarter quiet. Sophomore Nina Augustin, came off the bench and immediately hit a three pointer. At the end of the first quarter, the score was 14-11. Robert Morris shot just 28.6 percent from the field in the first quarter.

At the beginning of the second quarter, it seemed like the Seahawks were going to soar to an insurmountable lead. Wagner pushed the pace and quickly found themselves leading 20-13. The seven-point lead was the largest lead for either side to that point. Then the Colonials started to crawl back into the game. On the back of Ezeigbo, who finished the half with six points and eight rebounds, RMU traded shots with their conference foe. The scoreboard read 26-25 in favor of the Wagner Seahawks.

It appeared that the Colonials hit the reset button at halftime. Robert Morris came out of the break looking like a complete team.

“We had to hold ourselves accountable to what was going on,” said head coach Charlie Buscaglia. “We were playing tight in certain possessions. Everyone had to open up and start playing with a better pace.”

In the third quarter, RMU showed why they are undefeated in conference play. Nneka Ezeigbo grabbed a rebound and went up strong. The ball bounced around and fell through the basket. Ezeigbo also drew a foul on the shot. Ezeigbo completed the three-point play. This sequence gave the Colonials a 28-26 lead. This is the first time that RMU was in the lead since the first quarter.

A developing story this year is the Colonials bench. Nina Augustin came off the bench and had a big third quarter. The Colonials’ bench added 29 points on the night. The third quarter was a decisive one as RMU went into the last frame leading 48-43.

It’s hard to win games when you fail to make any field goals in a quarter. The Seahawks shot 0-10 in the quarter and tallied only three points in the fourth quarter. Robert Morris outscored Wagner 21-3 in the last quarter as RMU rode away with the victory, 69-46.

There’s an old saying that goes, “history tends to repeat itself.” A little over a year ago, Ezeigbo had a double-double. She finished that game with 10 points and 13 rebounds. Nina Augustin had 13 points in that game.

In today’s game, the same names rang from the public address speakers. Ezeigbo dominated in the paint, finishing the game with 13 points and 17 rebounds. Nina Augustin and Honoka Ikematu made four three pointers each. The pair of sophomores finished the game with 14 points each.