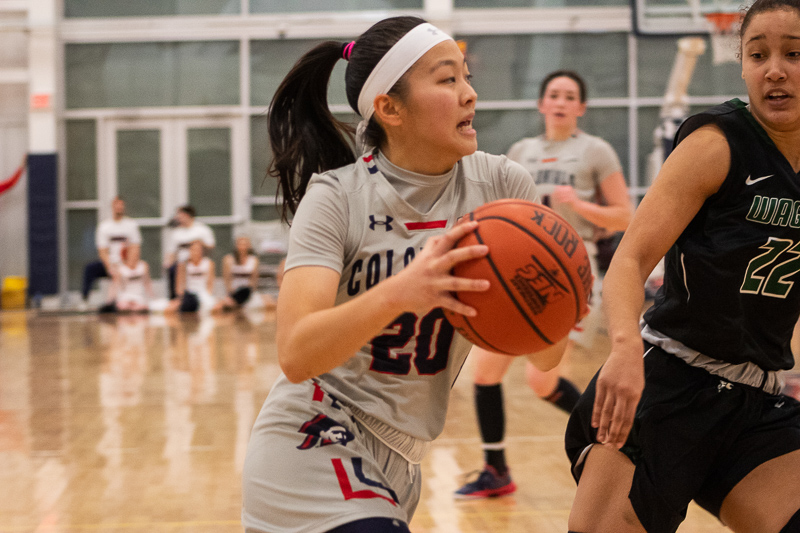 The Colonials seemed to lack one of their biggest strengths all year as the Robert Morris defense was nowhere to be found in the first half of the first quarter. It was a quick timeout by RMU head coach Charlie Buscaglia that changed the tide.

The second quarter saw the Colonials return to their first-place form as they went on a 12-2 run. That was all RMU needed to get back into the driver seat for the first time since the first minute of the first quarter.

Honoka Ikematsu willed RMU into the lead as the sophomore guard led all scorers with nine points in the first half. CCSU’s Ashley Berube was a problem for the Colonials in the first quarter as the Blue Devils’ center had eight points and seven rebounds in the half. Berube ended the night with 10 points and 11 rebounds.

When the teams headed into the locker room, the Colonials held a slight lead as the scoreboard read 25-22.

The Colonials carried their first half momentum in to the second half. RMU went on an 10-2 run to open up the second half with six of those points coming off turnovers. RMU, the 17th best defense in the nation, forced the Blue Devils to cough the rock up six times and held them to just 2-11 shooting in the quarter.

RMU’s offense kept rolling as the Colonials out-scored their opposition 20-9 in the third frame. This led to a much more comfortable 45-31 lead to start the fourth quarter.

In the fourth quarter, tt was business as usual for the Colonials.

The Robert Morris defense continued to dominate as they forced seven turnovers against the Blue Devils in the quarter alone. CCSU also only shot 23% from the field in the final quarter. In the entire game, the Colonials controlled the paint as they outscored CCSU 38-12 on the inside.

“They’re both very capable going out there and serving the team well,” explained Buscaglia about the team’s centers. “They’re growing everyday, they’re getting better everyday. That’s what’s important to us the growth and development. It’s been nice to see them both going out there and giving us more consistency, because that’s what we’re really looking for.”

When the final buzzer sounded the Colonials won in a decisive fashion, 60-40, a drastically different score from the last meeting between these two teams in which RMU escaped with a 64-57 win in Connecticut.

“We just talked about coming out and playing for 40 minutes,” Ezeigbo explained the scoring difference. “Our goal was to play good defense. I feel like we carried that out in the second half. The first half wasn’t our best.”

A notable absence from the Colonials bench tonight was redshirt senior Shakema Dashiell who missed the game due to a scheduling conflict.

“Her voice brings a lot of energy,” explained Ezeigbo. “She has a very big roll on the team as a leader. Her voice helps a lot of us get through situations and helps us stay up. Of course she is missed, but as a team we try to step up and fill her position while she’s gone.”

“Shakema is an amazing leader,” praised Buscaglia. “She doesn’t take any days off. We have to be strong when she’s not there.”