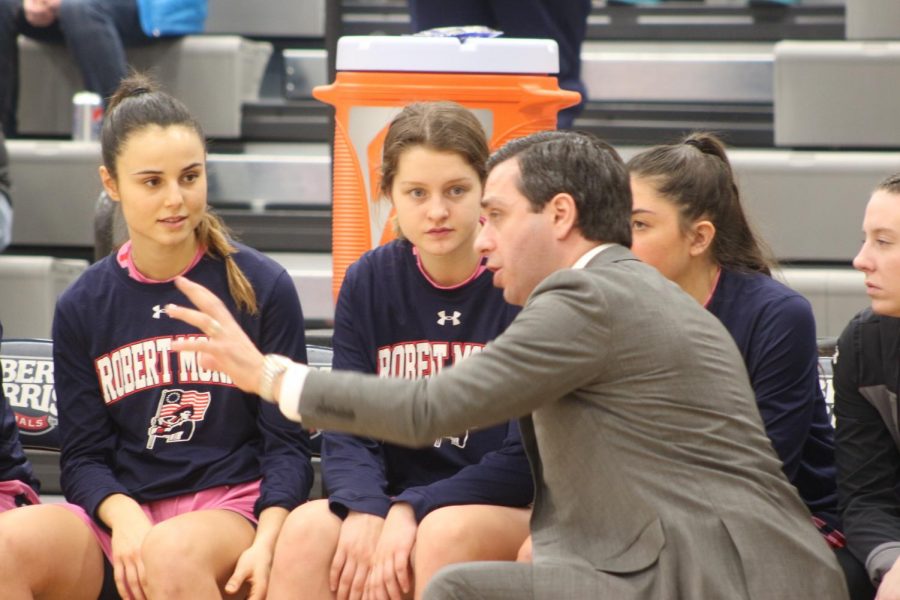 MOON TOWNSHIP — At the 5:45 mark in the fourth quarter, Honoka Ikematsu was able to put the dagger in the Fairleigh Dickinson Knights (8-22, 5-13). Ikematsu missed her first three ball of the sequence. Natalie Villaflor grabbed the offensive rebound. Villaflor missed a mid range jumper from the paint. The rebound bounced to Ikematsu. She swung the ball around the arc. Then the ball came back to Ikematsu in the corner and she buried the three.

That moment was the finishing touch as the Robert Morris Colonials (21-10, 16-2) put a stop to the Knight championship dreams by a final score of 64-38.

The two conference foes traded baskets in the early onset of this game. The 11th ranked defense in the nation was matched by the Knights. In the first five minutes of this game, both teams had committed three turnovers.

Fairleigh Dickinson, the worst offense during conference play, was able to keep pace with the high scoring Colonials.

At the end of the first quarter the Colonials held a surprisingly close one point lead, 12-11.

Nina Augustin lead the all scorers in the first quarter with five points.

The Colonials built a seven point lead a little over half way into the second quarter. The lead was built on the back of some empty possessions by Fairleigh Dickinson.

The turnovers helped the Colonials out score FDU in the quarter 16-9.

When the two teams left the court for the halftime break RMU held on to a eight point lead, 28-20.

RMU’s Nina Augustin continued to lead all scorers with seven points at the break. The Colonials offense was also bolstered by Honoka Ikematsu. Ikematsu came off the bench and added five points.

Fairleigh Dickinson had five players with five points in the first half. Madelynn Comly, Rachael Niles and Lauren Francillon all had five points.

The Colonials offense did not cool off during the break.

That point swing was led by no other than Augustin. The sophomore guard had six of the 10 points during the run.

The Colonials shooting performance in the early part of the second half can be summed up with one word, perfection. Robert Morris was a perfect four for four from the field. Three of those field goals were from behind the arc.

The strong shooting was led by Augustin as she made two of those three pointers. RMU shot 60% from the field in the third quarter. RMU rode that great shooting to a 20-point third quarter.

Robert Morris went up by 20 points at one point in the third quarter. The Knights went on a five point swing to try to close the gap.

With the score at 44-29, RMU’s Ire Ozzy-Momodu single-handedly got most of the Colonials lead back. The sophomore center scored four unanswered points.

As the two teams headed for the final frame the Colonials led 48-29.

The fourth quarter belonged to the newly crowned NEC Defensive Player of the Year.

Nneka Ezeigbo had quietly built a good stat line in the previous three quarters, as she had six points up to this point. Ezeigbo found another gear heading into the fourth. At the end of the game, the dominate center finished with 13 points and seven rebounds.

Honoka Ikematsu also had a great final frame. The sophomore guard entered the fourth quarter with five point and finished the game with 12 points.

Augustin had perhaps the most complete game for the Colonials. The Helsinki, Finland product finished the game with 13 point, four rebounds and dished out four assists.

The Colonials defense was able to hold the Knights offense to just nine point in every quarter except the first.

The Colonials have made the NEC Tournament go through Moon Township, and Nneka Ezeigbo has some colorful words about that.

“As coach always says, as long as were between the lines it doesn’t matter if we’re away, home or on a boat.”

Robert Morris will be back in action to host the Mount St. Mary’s Mountaineers. Tip off for the NEC semi-final game is set for 7:00 p.m.