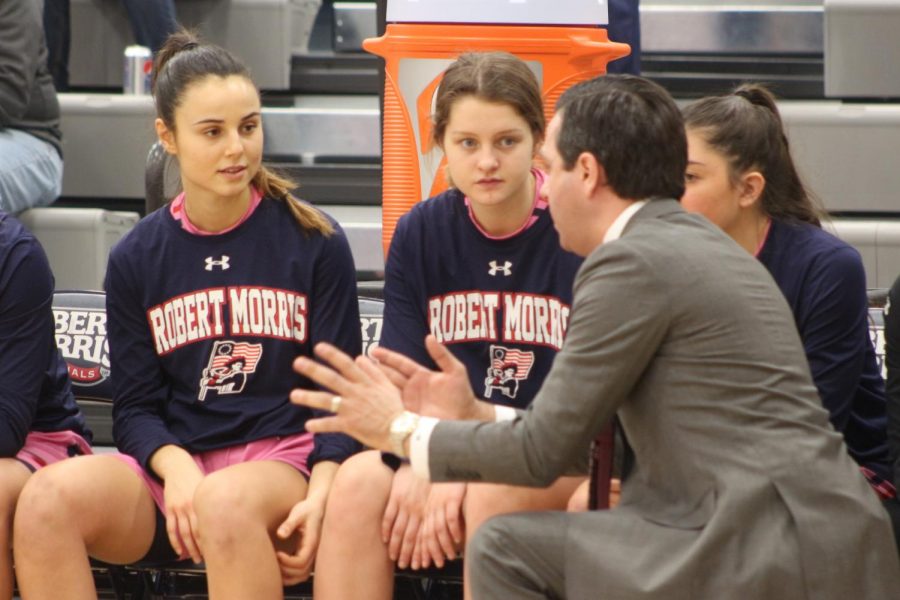 MOON TOWNSHIP — The Robert Morris University Colonials (16-9, 13-1 NEC) weathered a late push by St. Francis Brooklyn (15-11, 9-5 NEC) and defeated them by the score of 74-57. The Colonials dominated in the first half but let off the gas in the second half.

The nation’s 12th best defense came to play early in this game as Robert Morris forced five turnovers in the first five minutes of the game. The defense turned into offense as they went on an 11-2 run. The Terriers were held scoreless for over five minutes in the first quarter.

The once 15-6 Robert Morris lead quickly diminished. St. Francis Brooklyn’s defense then turned the tables on the Colonials. Jade Johnson brought the Terriers back within seven points. At the end of the first quarter the scoreboard read 20-13.

Nneka Ezeigbo lead all scorers in the first quarter. The junior, went into the second quarter with eight points. Robert Morris’s Nina Augustin and the Terriers’ Jade Johnson each scored seven points.

Nina Augustin continues to lead the Colonials. The sophomore by way of Helsinki, Finland, headed into the locker room leading all scorers with 12 points. Ezeigbo wrapped up her first half with 10 points and five rebounds.

The only offense that the Terriers could muster up came through Jade Johnson. The senior from Adelaide, Australia, went into the break with 10 points. Amy O’Neill had perhaps the most complete first half for any player on the floor. The Melbourne Australia, pulled down eight rebounds and dished out four assists.

The Colonials went into the third quarter with a comfortable 42-20 lead.

“We had been focusing on the game all week,” said Ezeigbo. “Coming in to this game we knew that we beat them by 20. We came out ready to work and set the tone on defense.”

“We gotta stay hungry, gotta continue to serve one another on both ends , and not lower our standards and our pace,” explained Robert Morris head coach Charlie Buscaglia when asked about his halftime message. “There was somethings they were doing, believe it or not, that were disruptive to some of the defensive schemes that we were running. We had to challenge ourselves not to get complacent.”

The last time Robert Morris scored 40 points in the first half was against LIU Brooklyn on January 14th. The Colonials went on to win that game 89-37.

After taking a 53-28 lead the Terries flipped the script. St. Francis Brooklyn went on 14-2 run. Jade Johnson and her Terriers put a dent into the once insurmountable 22 point lead of the Colonials. SFB outscored RMU 22-13 in the third quarter.

The Colonials struggled in the third quarter, but never lost the lead. Heading into the final frame the Colonials lead 55-42.

“I think we started to settle a little bit,” explain Ezeigbo. “There a little bit of a drop in the energy and communication. We talk to each other and decided that we couldn’t let that happen. We came into the fourth quarter with a lot more energy.”

“I think it was a little bit of both,” detailed Coach B, as he is known. “They are hard working and well coached. We didn’t handle things as well as we needed to when it came down to going down the floor and matching up quickly. Giving up those points had a lot to do with their willingness to come back and us not to respond in certain stretches.”

The fourth quarter was the first time the two opponents traded buckets since the first quarter. Robert Morris outscored St. Francis Brooklyn 19-15 in the final frame.

The Terriers played well in the second half but the Robert Morris lead was to large. The Colonials held on to win 74-57.

Nneka Ezeigbo finished the game with 16 points. This is her fourth straight game with 10 or more points. In the Colonials last 10 game, Ezeigbo has had double-digit scoring in nine of those games.

“Before every game I tell myself I can do this,” said Ezeigbo. “I also talk to my team and they instill their confidence in me.”

Nina Augustin and Ire Ozzy-Momodu did their part in the Colonials victory. The sophomores went for 14 points and 12 points respectively. Ozzy-Momodu also pulled down six rebounds. Freshman guard, Isabella Posset had 11 points of her own.

Jade Johnson and Amy O’Neill kept the Terriers in this game. Johnson tallied 22 points while shooting six for nine from behind the arc. O’Neill had perhaps the most complete game of all the players. She finished with nine points, 12 rebounds and nine assists. Ally Lassen also added 12 points in the losing effort.

The Colonials are back in action against LIU Brooklyn, on February 25th at the North Athletic Complex. Tip-off is set for 7:00 p.m.