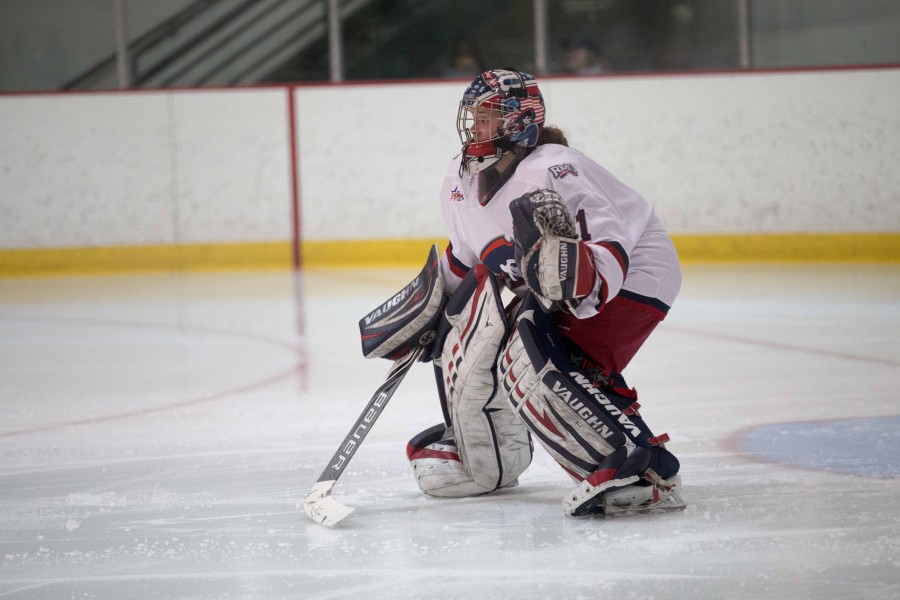 No matter who the call went against, the crowd mixed with boos and cheers as the Robert Morris women’s hockey team defeated the Mercyhurst Lakers, 3-2, on Saturday night. This win follows an overtime loss to the Lakers on Friday, which brings the Colonials recent record against Mercyhurst to 8-8-2.

“Last night, there was a lot of emotions for us and we knew coming into today, we were coming in wheeling’,” said senior Maddie Collias. “We were coming in guns hot. We were ready. There was no heading back. We weren’t going to make any excuses for ourselves.”

The first period gave up minimal scoring chances, with the majority going the way of the Colonials. Constant backdoor passes on a cutting forward would deliver two-on-ones, but the passes never seemed to connect.

It was all highlighted by a play from Ashley Vesci late in the period carrying the puck down the left side and tossing it to the opposite side of the net. As Rebecca Vint drove in, she reached but was held up and unable to connect on what would’ve been a prime opportunity.

Instead, defense reigned supreme in the early goings of this contest, with Leah Carlson providing a game breaking play with under two minutes remaining in the period. After a misstep by her defensive partner Katelyn Scott, she was the only one back on a two-on-one. While looking for help, she directed a backchecking forward into perfect position and dove to block off a shot, sacrificing her body as the Lakers forward fell on her in the process.

The second period was the big period of the weekend, though. Being that both regulation goals were scored in that frame on Friday, Saturday’s second period was the main event. Less than two minutes into the period, the freshman sensation Mackenzie Johnston stole the puck at the blue line and raced alongside the defender. She barely had a step on her defender, but made a strong move to her backhand and caught the goaltender out of position for a top shelf goal.

Mercyhurst would have a few good opportunities afterward, but never capitalized as it would bound off the heel of the stick and wide of the net seemingly every attempt. Instead, just over halfway through the period, the Colonials found themselves with a 5-on-3 power play. Megan Eady received the puck on the right side and faked a slap shot, which opened a great lane; she made a slap pass to Maddie Collias at the side of the net for a deflection and the second goal of the game.

“The biggest thing on a five on three is, there’s always going to be a two-on-one somewhere,” said Collias. “So I just popped out and Eady made a nice shot and I deflected it in. It was an odd angle. I really give credit to Eady, she put it on my stick and all I had to do was just give it a little tap in.”

Almost exactly three minutes later, the Colonials were on the attack again with a big three-on-two. Rikki Meilleur carried in on the left side and held for the lane to clear before passing it right side for Jessica Gazzola, who tapped it over the outstretched glove of the sprawling Amanda Makela. The goal nearly mirrored the previous goal by Collias, and eventually became the game winner.

A frustrated Mercyhurst squad gave fierce competition, but failed to capitalize on any opportunities — including a great shot from the point after a fake out pivot move. Robert Morris went into the intermission with a 3-0 lead.

The third period swung in favor of the Lakers, though. A penalty call to Leah Carlson led to multiple chances for the Lakers, and they capitalized on one. Late in the power play, the puck came free from the corner into the slot for J’Nai Mohadeo, who toe dragged a seemingly caught off guard defender. She fired a rocket to the top corner just out of reach of Dodds for the Lakers’ first goal of the game.

“I’m a goalie that’s really mental, so nobody usually does try to bother me,” said Dodds. “So going into the third, I definitely was trying to bear down and get it done. Even though I didn’t get the shutout, obviously that’s my first goal of the game and the second is to win the game. I definitely achieved that second goal, and I’m glad we won.”

Dodds persevered, however, as shown by a save made not far past that goal. A good deke broke Sarah Robello free, and she fired a backhand shot as high as she could, but Dodds stood taller and knocked the puck away ferociously and defiantly.

“When you get scored on, I think being a goalie, it is extremely a mental aspect,” said Dodds. “But you have to bear down, and you have to know that you will get scored on. You aren’t going to stop every puck every game, but you definitely try to. You try to stop every puck and make every save you can, and I think for me, just realizing after that first one went in that I had to be there for my team and I had to push back and I needed to get us through the rest of the period and get the win.”

With exactly one minute remaining, the Colonials were exhausted and tossed the puck out of the zone. It appeared to be reached for and contacted by the Lakers defense, but icing was called and the play continued in the defensive zone. The Colonials returned defiant again, with Maddie Collias getting the puck just past the blue line with just over half a minute remaining and tossing the puck toward the empty net on the other end. It would fall wide, but Katie Fergus skated as hard as she could and beat out the icing call.

“That was awesome,” said Collias. “Fergie really saved me there on that one. I was aiming for the net, didn’t hit it obviously. She just out of nowhere came flying. She’s fast, she’s strong and she got in there. That’s huge. We practice that stuff in practice. We work on out manning, it’s just pure hard work out there.”

The Colonials went on to win the game and pull within four points of the conference lead.

“It’s always nice beating Mercyhurst,” said Dodds. “It’s good beating any team, but Mercyhurst is our biggest rival, so it’s definitely a great feeling. Especially after that tough OT loss last night. I definitely think our team is going to be pushing here, and after Christmas break we came back and we’ve been ready to go ever since. I think it’s just we’re all working together, it’s chemistry. The lines are coming together, I’m playing a little bit better. Ultimately it comes down to scoring goals and stopping pucks.”