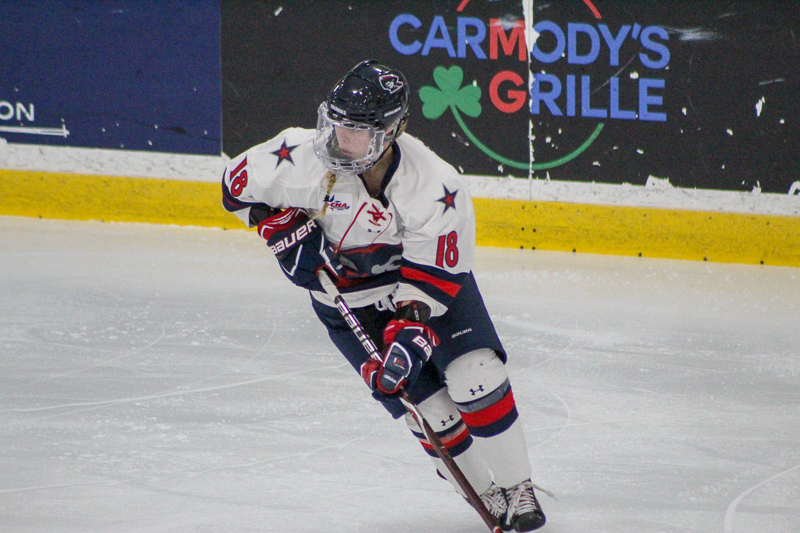 PITTSBURGH — For the second day in a row, the Robert Morris Colonials women’s hockey team (6-6-1, 4-4-1 CHA) faced off against the no. 10 ranked Colgate Raiders (7-4-0, 3-1-0 ECAC) at the RMU Island Sports Center. On Friday, the Colonials comeback fell short, losing 4-3. However, in the game on Saturday, the Colonials and Colgate left Colonials Arena with a draw.

Through the first five minutes of the game, the Colonials put heavy pressure on Colgate as they led 7-2 in shots. Natalie Marcuzzi had a good opportunity for the Colonials halfway through the period, but her backhand on the rush was stopped by Raiders goaltender Julia Vandyk.

Malia Schneider got the first goal of the game with 12:26 elapsed in the period, as her wrist shot from the side of the net snuck past the left post of Arielle DeSmet to make it 1-0 Colgate.

At the end of one period of play, it was 1-0 Raiders after the goal from Malia Schneider. However, looking at the stats, it didn’t seem that way. Robert Morris led Colgate 26-9 in shot attempts; with nine reaching the net compared to Colgate’s six, with Emily Curlett having six of her own. Neither team had any penalties in the first.

In the second period, RMU tied the game early, as a shot from Natalie Marcuzzi bounced its way through the five-hole of Julia Vandyk of Colgate. This would be Marcuzzi’s third goal of the year. Marcuzzi said that it was due to “the pressure we had on our line,” and that she “popped the puck up in the air, and just ripped it at the net.”

Freshman netminder Arielle DeSmet was called upon for the Colonials with just under 14 minutes remaining in the period as she made two great saves in a row, one on Shae Labbe, and one on Coralie Larose. Although Lauren Bailey started the game on Friday, Coach Paul Colontino started DeSmet in this game, saying that “She had an impressive practice week, and last night (she played most of the third period), she impressed, so we gave her the chance tonight.”

Colgate got a chance during a 4-on-4 situation, but the shot by Shae Labbe rang one off the iron. About two-thirds of the way through the period, the game started to get a bit feisty, as there were three players in the box at one point, for a Colonials 4-on-3 powerplay.

At the end of two, the game was tied 1-1. Natalie Marcuzzi got the goal for the Colonials unassisted at 2:18 in the period. RMU was outshot in the period 7-6 and would be 0-4 on the power play, compared to Colgate’s 0-2 on the man advantage.

At 0:52 into the third, Colgate retook the lead after Eleri MacKay slot one home from point-blank range and beat Arielle DeSmet to make it 2-1 Raiders. Just over four minutes into the period, Colgate put some heavy pressure on the Robert Morris net, but was bailed out by a shot by Delani MacKay that was blocked by Kirsten Welsh.

With just over 14 minutes remaining, co-captain Maggie LaGue again tied it up for the Colonials as she fired a blast that seemingly bounced through Julia Vandyk. This was LaGue’s 11th goal in her Colonial career.

Halfway through the second period, Malia Schneider of Colgate shot a puck that beat DeSmet, but went off the crossbar, bounced down and somewhat stayed out. On a power play after a roughing penalty to Malia Schneider for Colgate, Robert Morris put heavy pressure on net, but Julia Vandyk kept the game tied 2-2.

At the end of 60 minutes of play, the game was tied at 2-2 and went into overtime. Through three periods, the shots were tied at 27 apiece. Maggie LaGue scored for the Colonials while Eleri MacKay found the back of the net for the Raiders.

In the five-minute sudden death overtime, with 30 seconds remaining, Jaycee Gebhard was stymied on a partial breakaway by Vandyk. And at the final whistle, the game stayed at 2-2.

At the end of the game, RMU outshot Colgate 30-29 and had three penalties compared to Colgate’s four. Maggie LaGue (RMU), Arielle DeSmet (RMU) and Julia Vandyk (Colgate) were named the three stars of the game.