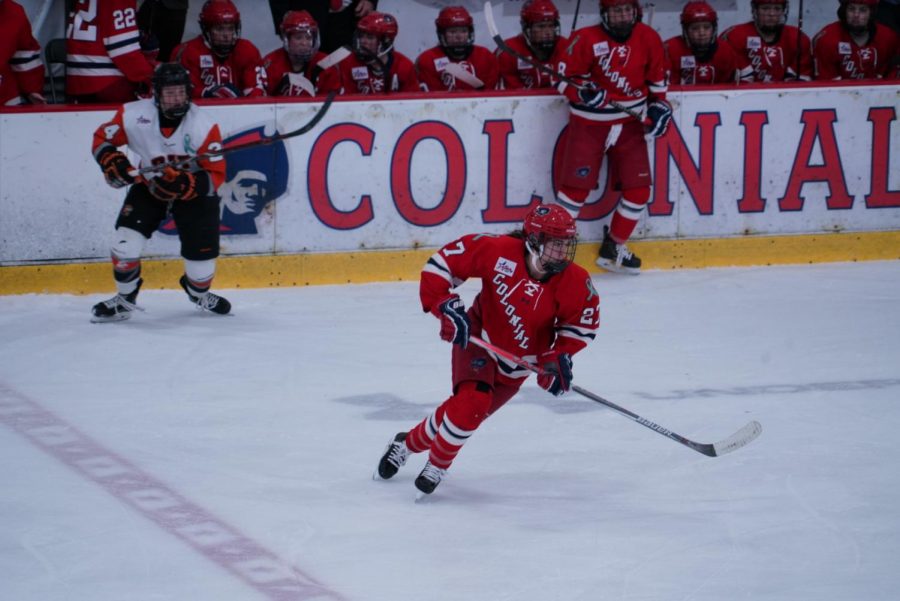 This gives the team some much needed rest as they have worked hard and currently remain atop the CHA standings. RMU leads with nineteen conference points and is ahead of Mercyhurst (11-10-3, 8-3 CHA) by three points. If RMU continues, they are on pace to again win the regular season crown and receive another bye week heading into the CHA playoffs.

“It’s definitely fun to be at the top and it makes us work harder because people are always coming at us. Going into the end, we definitely want to be up there so we can get the bye week for the quarters,” stated starting goaltender Lauren Bailey.

This bye week also allows for some recovery for Kirsten Welsh, who has been injured since late November with an apparent leg injury. Now skating, head coach Paul Colontino and the rest of the Colonials are hoping Welsh can get back into the lineup as soon as possible.

“She is doing well and progressing real good, she’s been skating so we are hoping the progress continues on the positive side, and if we got her for Penn State that would be huge,” stated Colontino.

In terms of adjusting to the loss of Welsh for these past couple of series, Lauren Bailey added the following.

“I think we have adjusted well, she is one of our top defenseman so it’s definitely hard to have her out but I think the D that have came in this year are doing great. They are blocking a lot of shots making my job easier.”

Speaking of defense, this team has been stellar at it, especially against RIT this past weekend. The team was able to shut out RIT saturday after only allowing one the previous night. Led by Emily Curlett with 13 total, the defense have been blocking shots with a total of 34 total blocks in the RIT series. On top of this, the penalty kill went 100% the entire series, and the most important penalty killer in Lauren Bailey was recognized for this as she was awarded CHA goalie of the week.

“She has been phenomenal in all honesty and she’s had some huge games. Coming off of last year she tried to make a lot of changes on and off the ice from practice habits to game habits. She really did a good job at looking at every piece of the puzzle and for that I think it has paid off for her,” Paul Colontino had to say about his star netminder.

“Whatever she has done in all these little areas has made a huge difference for her. On the ice she has been playing and practicing consistently at a high level and in our last weekend she was a huge factor in the wins on both nights,” Colontino added.

Like any humble player, Bailey credited her teammates to her success.

“I give credit to my team because, our defense they block a lot of shots and our forwards are playing great so it keeps the puck out of the D zone. I’m just trying to focus on every shot, stopping every puck, and that’s helped me throughout the year.”

But not only has this team been solid on the defensive side of the puck, they have been scoring as well. The line of Amber Rennie, Jaycee Gebhard and Lexi Templeman may have not been as noticeable as they usually were last series. But in a more defensive series, they were certainly there generating chances. In the series Rennie tallied one goal, Templeman had sixteen shots and Gebhard had two assists while she also reached 100 shots on the season.

“They are a line with great chemistry and they can play against anyone in the country. Whether it is an offensive or defensive side of the puck those guys know how to work and compete against the top players and the top teams in the country. They put up great numbers for us both on special teams and five-on-five, and when you have them in practice I think it pushes other lines,” stated Colontino when asked about the line.

After this bye week, RMU will be back in action as mentioned before in Penn State, February 8th and 9th for a pair of 1:00 pm games on the road. Paul Colontino stated the game plan below.

“Like always we focus on what we can control and in many situations it’s our game. We will take a look at Penn State like we always have but everybody knows everybody in this league, it’s a small league so we will prepare like we always do.”