Women’s hockey off to strong start with exhibition victory 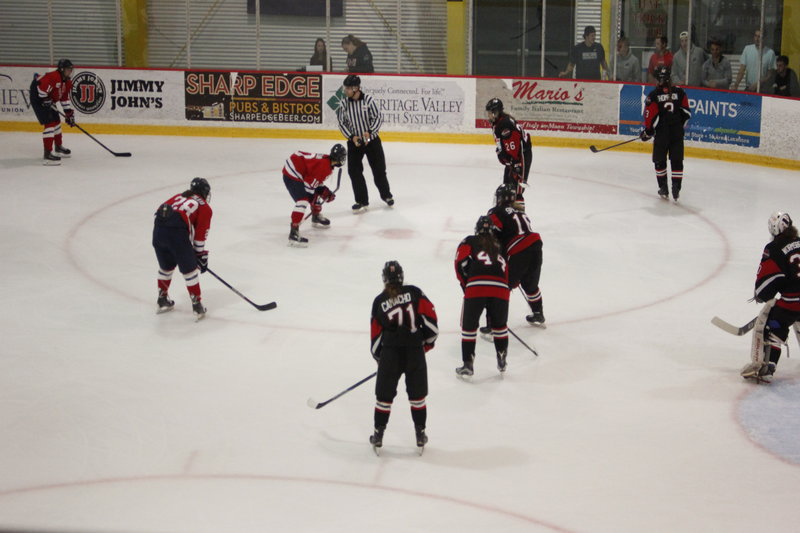 The Robert Morris Colonials earned a well deserved shutout against the Toronto Aeros on Sept. 23 at 84 Lumber Arena in their exhibition match.

The Colonials took possession immediately off the puck drop. Dominating the ice, Robert Morris fired off 18 shots during the first period alone. Meanwhile, the Aeros struggled with only four.

At 14:59, sophomore defender Maggie Lague shot the puck past the flailing Aeros netminder Kayla Wormsbecher to put the Colonials up 1-0. The shot came on the power play, and was assisted by senior defender Mikaela Lowater and senior forward Amanda Pantaleo.

RMU started the first period with junior goaltender Elijah Milne-Price in net, who earned the first shutout of the season.

Coming back after intermission, it didn’t take the Colonials long to get back into that dominant stride.

At 3:16, Lowater buried the puck for yet another power play goal. She was assisted by junior forward Brittany Howard and freshman forward Jaycee Gebhard.

As the clocked ticked down in the second, the physicality intensified. Both sides began to throw their body weight, checking each other into the boards in a frantic chase for the puck.

Near the end of the period, sophomore forward Caitlyn Sadowy collided with an opponent and went down hard. She remained on the bench for the remainder of the period, but was taken to the hospital for an upper body injury during intermission.

“There’s nothing official, but yes she had to be taken to the hospital,” head coach Paul Colontino said after the game. “She did get injured in the second period and was unable to continue. We are waiting to see what exactly happened.”

Senior goaltender, and fan favorite from last season, Jessica Dodds controlled the net during the second period. She held the Aeros at bay as well, keeping the score at 2-0.

Starting the third period, the crowd could tell Aeros weren’t going down without a fight.

RMU was shaken up by the loss of Sadowy, and the Aeros used that to their advantage. Quickly gaining possession, the Aeros managed to get off eight shots, twice as many as in the two previous periods.

Though they did not score, they held the Colonials, capping the score at just two goals.

At the other end of the ice, sophomore goaltender Lauren Bailey was getting her time in net. Though she had a couple close calls, she too maintained the Colonials shutout.

The game ended with a score of 2-0 in favor of RMU. Milne-Price was officially awarded the shutout, but all Colonials goaltenders should be commended for their outstanding play.

The teams shook hands, then met at center ice for a photo.

Though the spirits in the stands were high, Robert Morris looks to improve over the next week before their next match.

“I think we have to build our stamina and we have to get in better off-ice shape,” said Colontino. He then added that poise and team chemistry were also key points to finding success.

“I really like our first period. We ran our systems very well,” Colontino said. “I think the 5-on-3 also went well. We haven’t had much time to practice the 5-on-3 kill, but we settled in and found a way to get the job done.”

The Colonials will face off against Providence on Oct. 1. The match will be played in Providence, R.I. RMU will return home the following week for home games against RPI on Oct. 7-8.