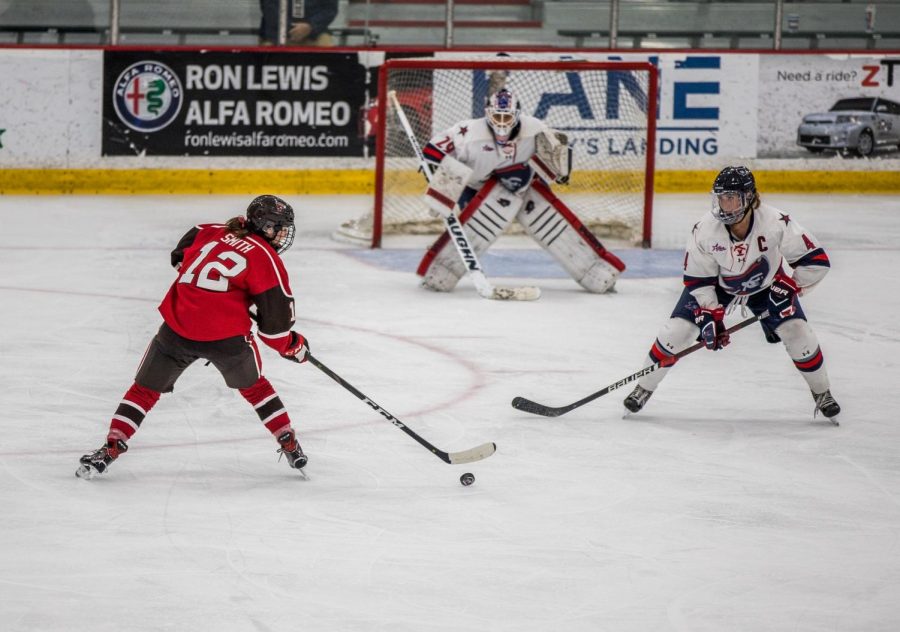 PITTSBURGH — The Robert Morris women’s hockey team (6-8-4, 4-1-1 CHA) looks to continue their winning ways in conference play as they host the Penn State Nittany Lions (7-7-2, 2-4 CHA) for a two-game home series on Friday and Saturday night at Colonials Arena. Before these two teams square off, let’s take a look at some players to watch out for and look back on the last series for both squads.

Recapping Robert Morris
The Colonials are coming off a split last weekend with the No. 7 ranked Cornell Big Red, losing game one 5-2 on Friday before roaring back to tie in game two 3-3 on Saturday. Captain Amber Rennie and Caitlyn Sadowy propelled the Colonials out to a 2-0 lead in game one, with Jaycee Gebhard extending her point streak in an assist on Rennie’s goal. Shortly later, Cornell scored four unanswered tallies in the second, including two by Willow Slobodzian en route to their victory.

In game two on Saturday, it was the Big Red who jumped out to the lead 1-0 on a goal from Kristin O’Neill at 12:51 of the second period. Rennie again responded as she did the night before, finding the back of the net to tie the game at one off an assist yet again from Jaycee Gebhard who kept her point streak alive and well. However, Cornell jumped out to a two-goal lead on their second of the game for O’Neill and Slobodzian continuing her scoring touch from the previous night. However, RMU would not be denied and stormed back with two goals from Emily Curlett to tie the score and end the matchup in a draw with one of the best teams in the country.

Amber Rennie: The captain for the Colonials has been on an offensive tear lately, and her goals against Cornell proves that she can put the puck in the back of the net when the circumstances call for a comeback. Rennie is a threat both on the shooting and passing front. She can easily work in around to powerhouses like Gebhard and Curlett.

Jaycee Gebhard: It is truly astounding that Gebhard hasn’t been more talked about outside of the RMU hockey circle. Gebhard always seems to either score or assist on a magnificent play whenever she steps foot on the ice. It will be interesting to see how long she can go with this hot streak, as she is currently averaging almost a point per game.
Players to watch for Penn State
Izzy Heminger and Loli Fidler: In their first season with the Nittany Lions, Heminger and Fidler have become two of the most productive freshmen in College Hockey America. Heminger’s presence on the blue line has been very noticeable in the last five games where she’s posted four points on two goals and two helpers. Her plus-minus rating on the Nittany Lions’ four-game unbeaten streak is +3 and she ranks second in the conference among freshmen defensemen with six points. Only PSU’s Taylor Kirwan has more with seven. Fidler is tied for second among all CHA freshmen with seven points on a pair of goals and five assists (Lauren Bellefontaine, SU, 9). Since her two-goal game against Mercyhurst on Oct. 27, Fidler has continued to produce several scoring chances for the Nittany Lions with 27 shots on goal in the last seven games, including a season-high eight on Nov. 20 against RIT.
Predictions
I feel that RMU will get back to their winning ways after a hard-fought series against Cornell. They sit in second in the CHA standings, surpassed only by their foes from Erie, Mercyhurst, who have three more points. RMU will get a sweep of the weekend, 3-1 and 4-2.