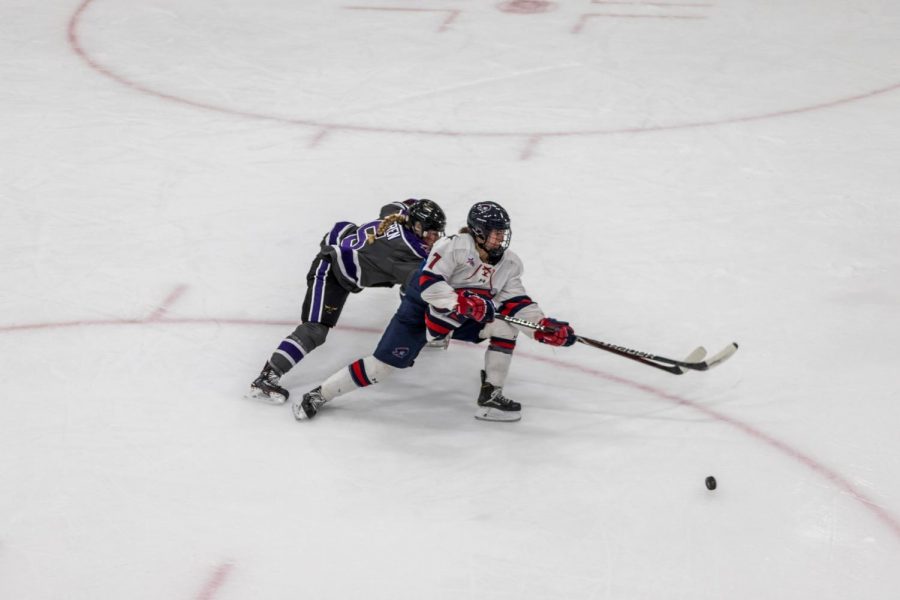 PITTSBURGH — Friday night, the Robert Morris women’s hockey team (6-6-3, 4-1-1 CHA) once again battled the Minnesota State Mavericks, (4-5-1, 2-5-1 NSIC) came to Colonial Arena at 6:05 to start off the Thanksgiving break. The Colonials would go on to rally in the third period and tie the game 4-4 despite going down 4-1 entering the 3rd period. Overtime did not decide this one as a 4-4 tie ended the game.

Early on, the Colonials came out hot and put together a solid start. Unfortunately, they could not capitalize on their chances as Minnesota State goaltender Abigail Levy stood her ground. Later on, penalty trouble and puck luck caused the Colonials to find themselves down by a pair, 2-0.

“We had some glimpses of some very good shifts right out of the gate, but we got behind a goal and then we played loose and undisciplined after that,” head coach Paul Colontino stated after the game.

The first Maverick goal came off the stick of Brooke Bryant on the power play at 9:16. This then was followed by a two-on-one goal where Demi Gardner setup Corbin Boyd for her first of the game at 17:49.

Right after the Boyd goal, superstar Colonial center Jaycee Gebhard went on a mission to cut the lead to one, and she did just that. Gebhard drove to the net and notched an assist on a goal that was chipped in on the rebound by Natalie Marcuzzi at 18:45. Gebhard now has 19 points in 14 games, with nine goals and 10 assists.

The Colonials were still in this one after only being down a goal heading into the second. Unfortunately, the mistakes that cost the team in the first period, continued to a greater extent in the second period which was RMU’s worst in the game. The loose defense allowed Brooke Bryant to score her second of the game at 10:03, and penalty trouble allowed Corbin Boyd to get her second goal of the night as well at 18:49.

“I thought the penalties were not the smartest plays and what is a double whammy is when one of your top penalty-killing D takes that penalty, it costs you twice as much. The penalties we took were because we were watching the game, and that’s not right,” Colontino stated when asked about the penalty that Kirsten Welsh took that lead to the goal.

But yet again, the Colonials played a third-period game and somehow tied the game up despite having struggled in the previous two periods. The first goal of the comeback was notched by Emily Curlett at 11:02. Her goal was then followed by Maggie LaGue at 12:58 and Kirsten Welsh at 19:39. RMU was gifted four power-play opportunities in the third period alone and three different defensemen all scored these goals. Despite this, coach Colontino and his team did not believe that they played well enough to even deserve the tie.

Up next, the Colonials will battle the same Maverick squad tomorrow afternoon. The game will again be held at Colonial Arena with a 1:05 pm puck-drop.