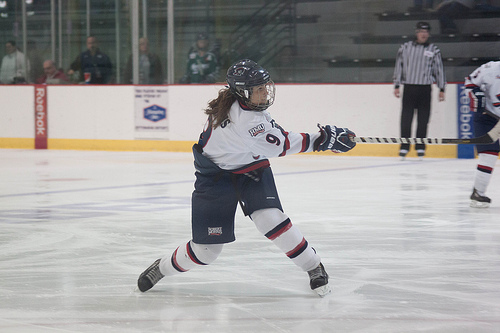 The Colonials started the season 1-0 after their 3-2 defeat of Providence Saturday.

RMU 3 (1-0), Providence 2 (0-2): The Colonials season started in a bang as RMU opened it’s regular season Saturday against Providence in Providence, Rhode Island and skated away with a 3-2 triumph. Sophomore Amber Rennie got Robert Morris on the board on a power play goal at the 4:30 mark of the first period taking a 1-0 lead. Providence scored two goals in the second and took a 2-1 lead but freshman Jaycee Gebhard tied the contest at 2 at the 11:42 point of the third period on a power play chance. Moments later, senior Meave Garvey scored what turned out to be the winning score  in the last minute of the game on yet another power play opportunity and gave her team the one goal advantage of 3-2. Starting goalie Laura Bailey made 29 saves for Robert Morris in net.