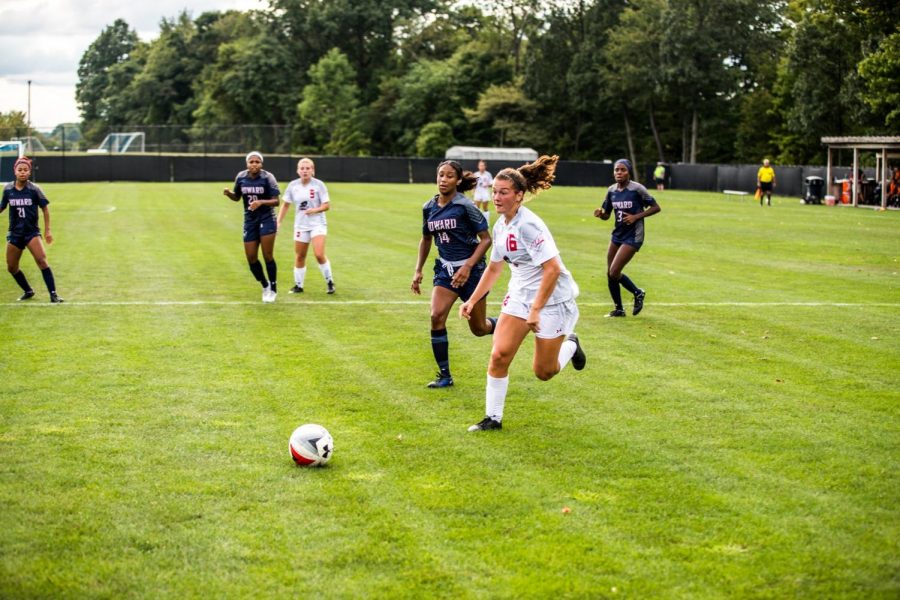 The Robert Morris women’s soccer (4-11, 2-3) is taking on the east coast, this weekend. The Colonials are set to square off with the Bryant Bulldogs (6-6-1, 2-2-1) on Friday. They then get back on the bus and travel to Fairfield, Connecticut and face off with the Pioneers of Sacred Heart (3-12, 2-4). The Colonials are set to play two conference opponents, here’s what to look for.

Tough sledding for RMU
The Colonials have dropped the three of the past five matches. Robert Morris has yet to win back to back games this season. They came close after their win against Wagner, but Central Connecticut State would beat Robert Morris, 1-0, on a penalty kick in the 26th minute of the game. One of the bright spots for the Colonials would be Jane Schleicher scoring in the win against Saint Francis. To a casual fan, this would come as no surprise, but Schleicher was held scoreless in the previous three games. This is the longest scoreless stretch for her this season.

The strong discipline and the stingy defense hasn’t been enough lately. Bryant has been on a bit of a slump. The Bulldogs have lost in their past two outings. Both losses were only one goal differences.
A look inside the heart

The Colonials and Pioneers are also tied in the conference. They are both sitting in the sixth slot. Depending on the result of the Bryant game, RMU could be in a position to leave Sacred Heart in sixth. In the case of a Bryant win and a win against Sacred Heart, Robert Morris would jump up to the fifth spot and be tied with the Bryant Bulldogs.
Players to watch
Bailey Farabaugh, midfielder and forward, Robert Morris
Farabaugh is a freshman midfielder and has registered four points all season. She is also the second leading scorer on the whole team. She hasn’t had a point in the past two games. If the Colonials want to be successful this weekend, they need to have another player, other than Jane Schleicher, to score. Bailey Farabaugh would be the next best option.
Alex Mesropyan, midfielder, Sacred Heart
The Pioneers have had a sputtering offense lately. Mesropyan has eight points this season. She is the leading scorer for the Pioneers. SHU needs to reset their offense against this Robert Morris team. The Pioneers will be looking to Mesropyan to get their offense on the right track. Mesropyan has been cold as of late with only one point in the past three games. Even in a slump, however, Mesropyan is the best option for this Pioneer squad.
Cayla D’Amico, forward, Bryant
Bryant’s lead scorer also has eight points. Cayla D’Amico is the leading scorer for the Bulldogs and their best option. To say D’Amico is going through a rough patch would be generous. She hasn’t earned a point in her past five games, and it’s been nine games since her last goal. In her previous 10 games, D’Amico has one goal and one assist.
Meghan Dalton, goalkeeper, Bryant
Dalton is the starting goalkeeper for the Bryant Bulldogs. She has posted a 1.33 save percentage this season. That percentage has allowed her to post a 5-3 record. She ranks in the middle of the pack, in the conference, in most goalkeepers categories. She is going to put to the test by this RMU offense.
Predictions
The Colonials need this to be their best two games to help rewrite the season, however, I don’t think that is going to happen. The Colonials will lose to the Bulldogs 3-1. They will bounce back and defeat SHU on Saturday. The final score of that game will be 2-0.