Women’s soccer says goodbye to seniors with a victory 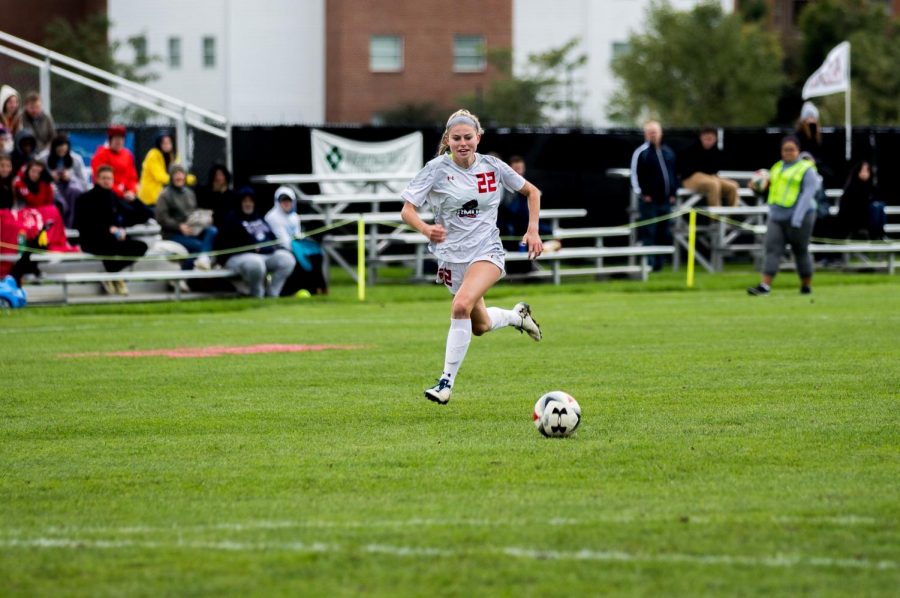 In the final game of the season, the Robert Morris Colonials women’s soccer team (6-12-0, 4-4 NEC) defeated the Long Island University Brooklyn Blackbirds (2-13-3, 0-7-1 NEC) by the score of 2-1. Both Robert Morris goals came from Jane Schleicher.

The game remained scoreless for the first 25 minutes due to impressive saves from LIU senior goalkeeper Aline Allmann. Allmann had seven saves on the afternoon as well.

Robert Morris broke the scoring open in the 25th-minute. After dribbling into the box, senior forward Jane Schleicher was taken down and the Colonials were awarded a penalty kick. Schleicher placed the ball in the lower right corner and beat Allmann to score her 12th goal of the season.

In the second half, the Blackbirds played with more offensive initiative, generating 14 shots compared to five from Robert Morris.

The Blackbirds sent several shots at the Colonials goal, with seven saves from Junior goalkeeper Julia Schmid as well as a clearance off of the line from freshman defender Jaiden Williams.

LIU Brooklyn was finally able to score in the 77th-minute. Freshman defender Meredith Hill scored her third goal of the season, receiving a rebound after the ball bounced around several times in the box off of the initial corner kick.

Schleicher and the Colonials would battle back, however, as the senior scored her 13th and final goal of the season and the decisive goal in the 85th-minute. After a corner kick bounced to her outside of the box, Schleicher was able to slot the ball into the bottom corner of the net. The traffic in front of the net caused Allsmann to not be able to see the shot and unable to make a play.

Schleicher’s two goals put her in second place all-time for goals in a season in Robert Morris women’s soccer history. Her two goals also give her a school record with 0.72 goals per game in a season.

The Colonials earned their sixth victory of the season and the final collegiate victory for seniors Schleicher, Samantha Lackner, Anni Varjonen, Keirsten Van Horn and Victoria Kraemer. The five seniors were honored prior to the game.

Weather played a tremendous part in the game, as constant rain led to a muddy and slick pitch to play on.

Robert Morris finishes the year with a Northeast Conference record of 4-4 and sixth place in the conference, just outside the four-team qualification for the NEC tournament. LIU Brooklyn finished winless in conference play and ninth in the conference. Both teams were mathematically eliminated before coming into the game.