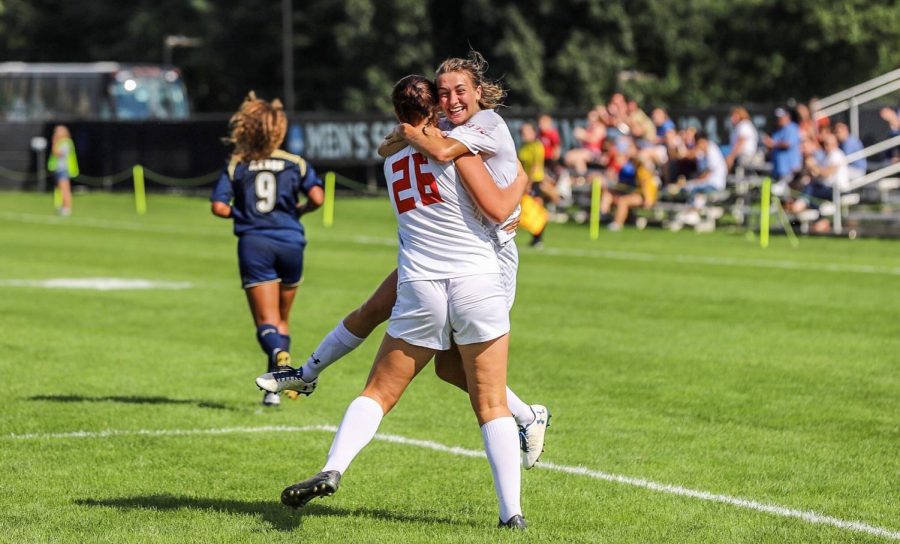 Moon Township, PA — The Colonials (2-6) returned home after a win on the road to Youngstown State University. Robert Morris University took on the University of Akron Zips (2-4-1) at home at the North Athletic Complex to string together their first back to back wins of the season.

The Zips took an early command of the game keeping the ball in their possession and pressuring RMU keeper Julia Schmid.

Akron broke the scoreless tie in the thirty-second minute of play when Carly Pcholinsky scored unassisted after a loose ball in front of the net was put passed by Schmid.

Yet the Akron lead would not last long, as Jane Schleicher scored her eighth goal of the season just 26 seconds after Pcholinsky. Keli Rosensteel was able to pick up the assist on the game-tying goal.

It looked like the Zips would claim the lead again after Akron put the ball into the back of the net. But it would be called off after one of the Zips made contact with Schmid preventing her from making the play.

The second half would start with the Colonials and Zips tied at one with Akron keeping the possession times in their favor. Akron not only pressured the RMU attackers but also the defenders to keep the game in their favor.

Akron took the lead again when Pcholinsky put the ball behind Robert Morris’s goalkeeper Sydney Bruckner who entered the game for the Colonials at the beginning of the second half of play for Schmid.

Akron was not done showing their offensive dominance on the pitch. The Zips would add a third goal to the ledger in the 78th minute of play.

Lauren Lambert found RMU keeper, Bruckner, out of position and gave Akron the insurance goal and the 2-goal lead.

Akron almost added a fourth goal just shortly after Lambert scored but luckily for Robert Morris, the shot from Pcholinsky rung off of the crossbar and back out into play.

Robert Morris looked to get themselves back into the game in the last ten minutes of regulation but a great save by Akron keeper Erin McKinney would keep the Zips up by two goals.

Robert Morris would end up losing the match by a tally of 3-1 with their only goal coming off of the foot of Jane Schleicher. Schleicher has already surpassed her goal total from last year before RMU has even reached conference play.

When head coach John Kowalski was asked about the opportunities the Colonials had in the offensive zone he said, “Scoring is not just about shooting, it is also about how you finish.”

Kowalski said he is looking to make a combination with Schleicher and Kristina Kelley to try to get some more goals on the board for the Colonials with just one game left before conference play will start.

The Colonials will look to go into NEC play with a win against Yale on Sept. 16th in New Haven, Connecticut.