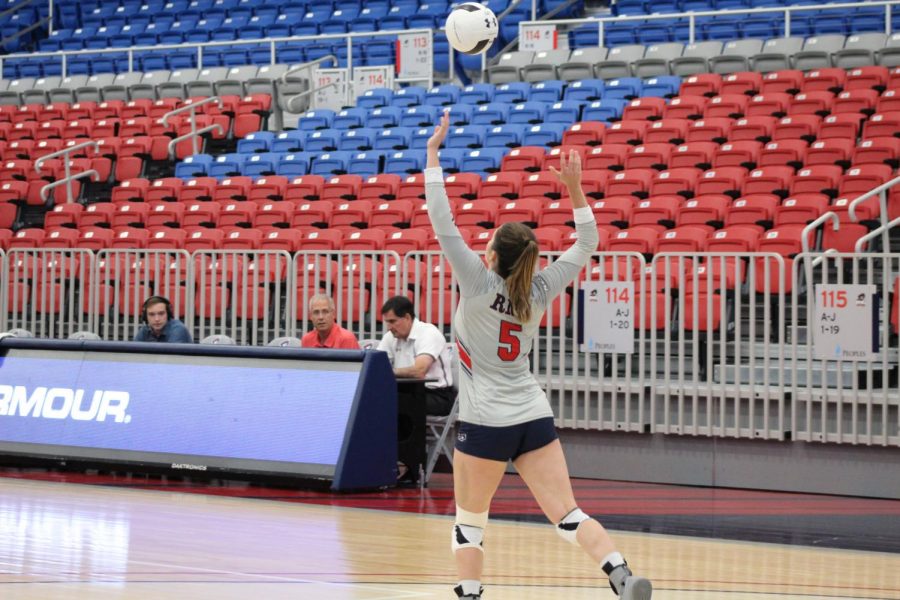 MOON TOWNSHIP– RMU volleyball (13-3, 3-0 NEC) looks to keep the ball rolling a little over halfway through their season, as the Colonials are undefeated in conference play through three matches. Their next matchup pits the team against the struggling St. Francis Red Flash (1-14, 1-2 NEC). RMU has generally gotten the better of the Red Flash, with the exception being a St. Francis win in September of 2018. RMU has been successful at home so far this season, coming into this game undefeated at the UPMC Events Center, and they look to continue their home success against St. Francis. Let’s see if they can stay on the right track, or if St. Francis can come out with the upset win and hopefully gain some momentum.
Previewing RMU
Robert Morris is looking to stay on the right track with a win. They are coming off a strong 3-1 win over Sacred Heart (6-10, 2-2 NEC). RMU took the first set by a score of 25-18, then they followed that up by winning the second set by a score of 25-22, but just when everybody thought that RMU would come out with the sweep, Sacred Heart took the third set by a score of 28-26. RMU closed out the victory by winning the match in the fourth set by a score of 25-23.

While Sacred Heart led in kills and points, RMU led in hitting percentage, aces, blocks and made fewer errors in the process. RMU often gets the best of their opponents this season. In twelve of the thirteen matchups RMU has competed in this season, they have won the match by at least two games. The Colonials posted shutouts in seven of those matchups as well. Hopefully, they can continue their success as they get into the latter part of their season.
Scouting St. Francis
St. Francis is coming off of a tough in-conference outing against the Bryant Bulldogs (9-12, 4-1), losing the match-up 3 sets to none. It looked like it was going to be a good matchup between the two teams and it could have gone either way, as Bryant took the first set only by a score of 25-20. Following this set, it was all Bryant.

The Bulldogs would go onto take the second frame by a score of 25-15 and then they would complete the sweep against the Red Flash by winning the third set by a score of 25-12. Bryant showed their dominance in pretty much every aspect of the game, leading the way in every category. St. Francis has struggled to get into a rhythm so far this season, failing to win a game in twelve of their fifteen matchups this season, and only winning one game in two of the other three match-ups. They will look to get on the right track with a win at the UPMC Events Center against RMU this Wednesday.
Players to Watch
Emma Granger (RMU)

Granger has shown her offensive dominance out on the court this season, leading the team with 166 kills and also has the highest hitting percentage with 0.353.

Hudak has also shown her ability to get involved with the offense this season. Second on the team in kills with 135 and leading the team in total attack attempts with 353, she has been a big part of RMU’s success.

Tyus has been the main part of the offense for St. Francis this season, leading the way with 150 kills and also leading in kills per set with 3.66.

Esposito has shown her defensive abilities throughout the course of the season. Through fifteen games, she leads the team with 25 blocks and blocks per set with 0.6.
Prediction
With the talent on both of these teams and given the circumstances, St. Francis could use a win to get themselves on the right path through the latter part of their season. However, with how well RMU has been playing this season and the success they are having, I believe that RMU will win this matchup and continue their winning ways.