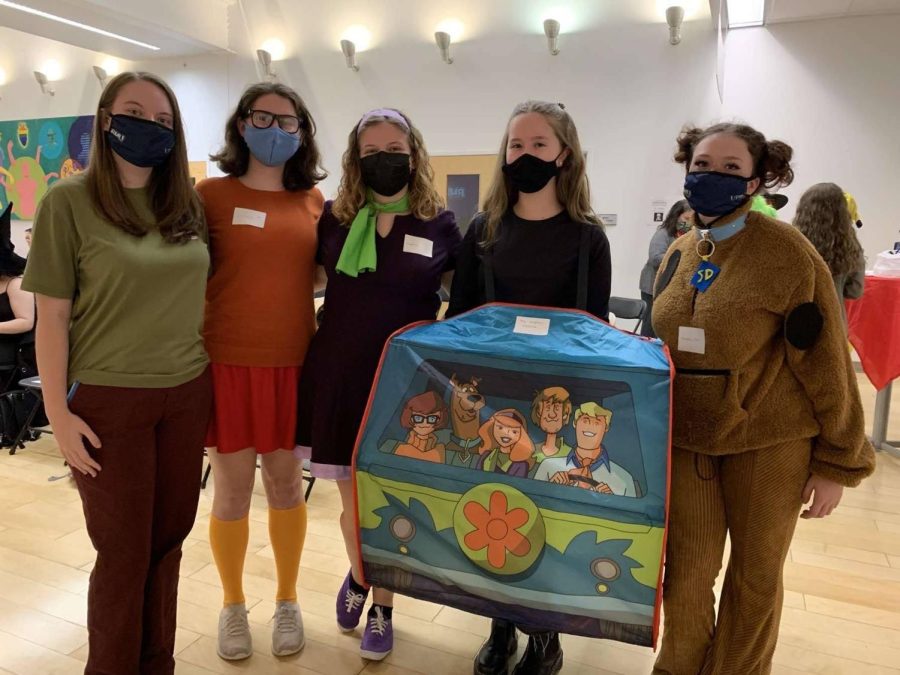 With this year’s Creepy Conference being the first one taking place since COVID-19, the Wheatley Atrium was buzzing. At the start of the conference, almost every seat was filled with someone who loves Halloween. Before the event started, pictures were taken of each person in their costumes. Some costumes were the Mystery Gang from Scooby Doo, Cruella De Vil, and a guy in a hotdog costume. A Halloween themed raffle was also included, some items being a movie, a mug, and snacks.

The first presenter was Carly Kaminski, with her presentation, “Terror in Technicolor.” It focused on the cult classic horror movie, “Suspiria.” Originally made in 1977, “Suspiria” was one of the last horror movies shot in technicolor. Carly showed screencaps from the movie, comparing it to other horror movies made at the time. “Suspiria” uses classic horror tropes like gore, vulnerability, and darkness to build the reputation that it has. However, the movie’s true talent is in its use of lighting and the vibrant colors from technicolor. The mixing of colors in the lighting make the movie seen dreamlike, with technicolor saturating the colors so much even the blood looked like bright red paint.

The next section of presentators were the short story writers. This year, there were three presenters. The first being Natalie Villaflor with their story “It comes in 3s.” The story was filled with suspense and mystery. The main character tries to catch someone trying to make others believe that the house is haunted. The main character gets stuck in a closet, and finally experiences what the house had to offer.

The next spooky short story was “Prepare for Rain” by Sonu Babu. Babu’s story was quite literally preparing for rain, if the rain was full grown men. Her use of imagery made the story seem so lifelike, as if you really were watching men fall from the sky and splat on the ground. Her descriptions of how the citizens prepared for this made a lot of sense, for example, putting cushions on the ground and moving cars from the street.

“I wanted to write how someone would react to unexpected weather. I went online and I was searching up prompts and I saw “It’s Raining Men” and the oil painting,” Babu said. “I was like ‘This is a good prompt I guess’ and I just wrote it like that.”

The painting Babu is referring to is Golconda by René Magritte, with its depiction of business men in suits falling from the sky onto houses.

“I think it was creepier when (the things falling were) just men because it was just one group of people, so it made it more specific. And I chose men because I just know a lot of women have a complicated issue with the fear of men,” Babu said. “That’s what I was thinking when finishing the story; who do you trust and who do you not trust?”

The last short story was by Mackenzie Hill, presenting their story “Let’s Go Fighting Vikings.” This action-packed story focused on the main character’s best friend becoming possessed within a viking mascot costume. The viking’s foam axe becomes hard steel after possession and the viking starts a massacre in the school gym. Surprisingly, the main character survives; but they’re the only one.

The last presentation was by Professor Willis from the Arts & Humanities department. She showed a presentation about subRosa, a cyberfeminist cell of cultural researchers committed to combining art, activism, and politics to explore and critique the effects of the new information and biotechnologies on women’s bodies, lives, and work.

Professor Willis focused on the art made from the ideas of subRosa in particular, like SmartMom and Cell Track. Cell Track touched on various controversies on biotechnology with women. SmartMom is a theoretical program that would make women able to give birth anywhere. But with this hypothetical advancement, the women would not have control of their lives, and more importantly their bodies.

“I think it’s interesting and important to think about the creepy aspects of Google or Facebook,” Willis said. “Even though we’re not necessarily creepy for using them, it raises a lot of questions about consent, about ownership, about what constitutes us and what controls it. Social media has figured out the value of our data.”

With SmartMom, a common subRosa topic, the data that would be saved from the mothers would be extremely personal medical information. The creepy part is that the data will be recorded and could potentially be shared with huge companies.

The last part of the 2021 Creepy Conference was the raffle and costume contest. The prize for best costume was a $25 gift card. Some honorable mentions were Mabel Pines, the guy in a hotdog costume, and the infamous Mystery Gang. The final decision was a tie between the Mad Hatter and Cruella de Vil. In the end, the Mad Hatter won with the best costume of the night. An enthusiastic woman named Nicole was the lucky winner for the raffle.