Greta Van Fleet’s Anthem of the Peaceful Army: Proof they can hold their own 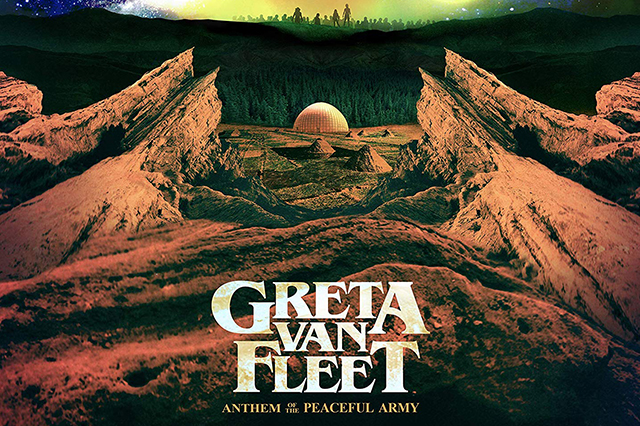 The band previously released two EPs titled “Black Smoke Rising EP” and “From the Fires EP.” Rock fans were indifferent about the group, however, some praised songs such as “Highway Tune,” “Black Smoke Rising” and “Safari Song” as a great return to the rock sound from the 1970s.

Critics enjoyed the sound, but were quick to write the band off as copycats of Led Zeppelin. This is due to Josh’s vocals patterns closely resembling those of legendary Zeppelin frontman Robert Plant. However, after touring all over the country and releasing new singles, fans became excited to see if Greta could find their own sound.

The album begins with the angelic “Age of Man,” which is a simply beautiful song. It begins peacefully, with wind instruments and an acoustic guitar accompanying Josh’s vocals. Eventually, the electric guitar comes in as Jake plays a powerful riff to launch us into the first verse. It then continues to gradually build before hitting the listener with a powerful chorus.

In a way, this song is welcoming us to the album. It is inviting us to take a journey and  see the beauty in everything around us. Not only is this song a great opener, but it is probably one of the best songs on the entire album.

“When the Curtain Falls” is a great example of which direction this band should attempt to proceed in. It just works, with the entire song creating a beautiful piece. The guitar work is masterful, the drums on the chorus make your stomach tingle and the bass adds to the song, rather than just following along with the guitar. You can’t forget the vocals, which convey loads of emotion in each verse.

When I first listened to “When the Curtain Falls,” I was not even close to a fan. As I listened to it again, though, it really grew on me. Once you sit back listen to all of the elements in the song, absorbing everything the band has to offer, you realize how good the song really is. Definitely check this song out, as it shows the beauty that rock songs can bring into the medium of music.

One last song I would like to cover in depth is “You’re the One.” The instrumental work is once again beautiful, especially the acoustic guitar during the verses. It is a simple love song about wanting someone that you lost. This is the type of song that has been written thousands of times before, but what Greta does right in this case is the emotion. Not only do the lyrics and vocals make you feel what Josh feels, but the rest of the band accompanies this song beautifully. It is a song that makes you reflect and think about a loved one.

As for the rest of the album, it is one big piece of mediocrity. I was genuinely excited to see this band put all of their doubters in their place, yet this album doesn’t quite deliver on that promise. Greta was going to release a fantastic rock ‘n’ roll album, the first big “classic” rock album in years. Instead, we were delivered an album with a handful of good songs.

Aside from the exceptional songs, we got several tracks that could be labeled as “nothing special.” Tracks “The New Day” and “Mountain of the Sun” are the worst songs on this album. Including these two tunes, many of the songs sounded the same and were just generally bland. There was nothing that jumped out and really snatched the listener’s attention. With out a compelling reason to go back and listen to these tracks, they are doomed to fade into obscurity.

This band is still young, with all members are in their early 20s. There is time for them to get their sound figured out and really create something special. They definitely have potential, they just need to put all of the pieces together. “Anthem of the Peaceful Army” showed the band had potential, while still showing how much they need to grow before they can really leave their mark on the music scene.

If you’ve never heard a Greta song before, check out the three I feature here. After that, check out “Black Smoke Rising,” which is their best song.