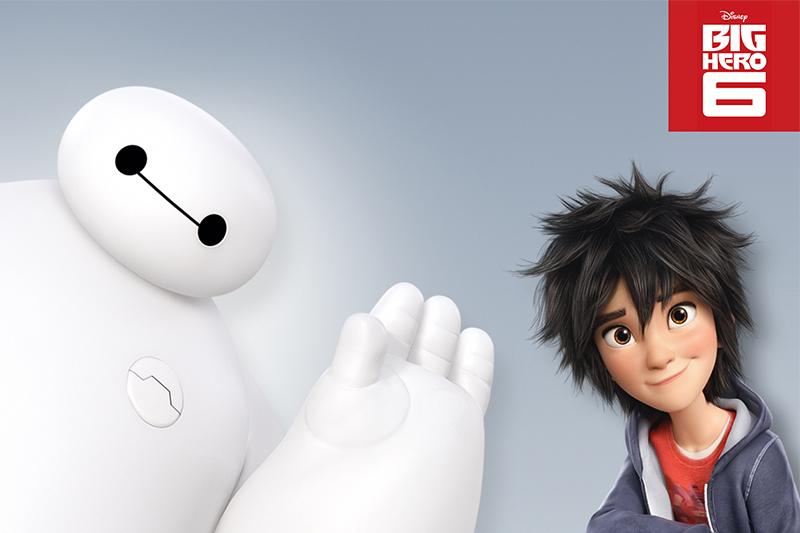 After the huge success of Disney’s “Frozen” last year, the studio has decided to go in a completely different direction with their newest animated feature, “Big Hero 6.” The film, inspired by the Marvel comics of the same name, is the 54 animated film produced by Walt Disney Animation Studios, and the first to feature Marvel characters.

This movie won’t gain nearly the success that “Frozen” enjoyed, but that should not take away from the film one bit. With “Big Hero 6,” Disney steps out of its comfort zone of musicals and fairy tales to bring a fun, action-packed story to life.

The story, set it the city of San Fransokyo, revolves around 14-year old Hiro Hamada, a super-intelligent robotics prodigy. With the help of Baymax, his lovable robot, and a few new friends, the group transform themselves into a team of superheroes and set out to stop a criminal who steals one of Hiro’s inventions.

Though, the plot is a bit predictable at times, the movie was nothing but enjoyable. The film reminded me a lot of “Wreck-It Ralph” in the way that the story developed. And I say that in the best way possible. Both movies install totally new ideas to the world of Disney and really break away from the typical style the studio has become so famous for.

The animation throughout was breathtaking, while the writing was truly inspiring. Most of the characters were well developed, which came as a surprise considering how many were featured. I was especially impressed with the depiction of Hiro. The interactions between Baymax and him nail the common themes of friendship and compassion throughout the entire film while bringing out every emotion possible. Honestly, I can’t wait to find somebody to replicate their fist bump with, because I’m guessing (more-so hoping) that it becomes a common greeting among kids as the movie gains a following.

A few of the supporting characters were also quite noteworthy. Fred, voiced by comedian JT Miller, will be a favorite character of many children, largely due to his comedic value throughout the film. Alan Tudyk also provides his voice for the third consecutive Disney animated film (“Wreck-It Ralph” and “Frozen”) as Alistair Krei; owner of the largest tech company in the universe, Krei Tech. Personally, I would have liked to have seen a little more screen time for Krei. His character had potential to provide much more to the film than he did. Also, being that it this a Marvel movie, make sure to look out for the Stan Lee cameo appearance.

One aspect that Disney never does incorrectly comes with the musical aspects of each film; “Big Hero 6” was no different. Though it didn’t follow the typical musical format, the score was absolutely excellent, providing exactly what you would expect in each and every scene. “Immortals” by Fall Out Boy acts as the theme song for the movie, and the transformation montage in which the song is featured is easily one of the coolest parts of the movie.

Overall, this movie was highly enjoyable. Younger kids will definitely love it. There is no doubt that Walt Disney Animation Studios is once again relevant, and I wouldn’t be surprised if this movie becomes a staple in the second renaissance.