Haunt of Not 2: Hundred Acres Manor 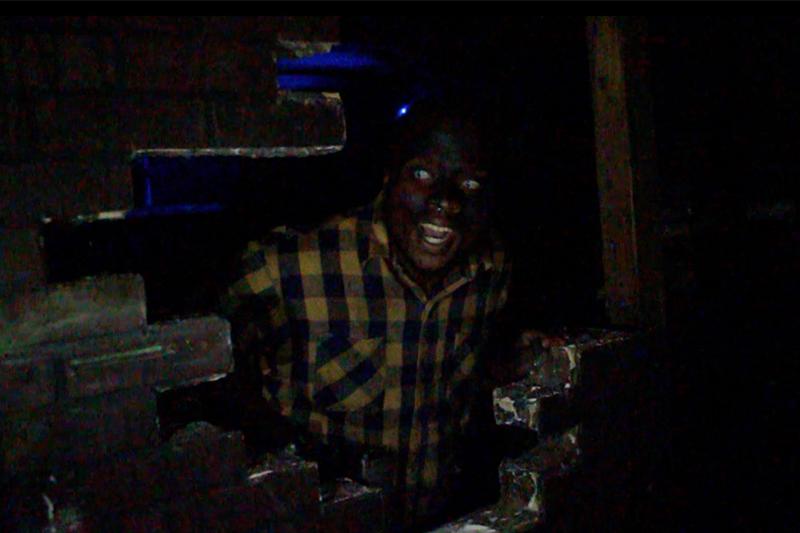 Another week, another haunted house. This time around, we’ve got another award-winning haunted house on our plate, Hundred Acres Manor, recently named one of the best haunted attractions in the country by Travel Channel.

Made up of six separate parts in the main haunt and the newly opened Zombie Paintball off to the side, Hundred Acres Manor has enough horror to barrage you with for your entire visit. From the minute you enter, the sights, smells and sounds of the manor are enough to put you into sensory overload.

The adventure began with a trip down a rickety old elevator, in a part of the manor called Dead Lift. On the particular night we were there, a demented bell-hop sang myself and my group a terrifying version of the hit Frozen song, “Do You Want to Build a Snowman,” aptly named, “Do You Want to Hide a Body,” while we were being whipped around in an elevator that was going seemingly nowhere and everywhere at the same time. It might have been the first thing that I experienced, but it still sticks in my mind as my favorite part. There was just something about him finishing the song with “Okay Byeee” and the elevator doors opening at the exact time that was so perfectly planned, and so perfectly timed out, that I felt like I was in Disneyworld.

As you exit the elevator you make your way to the second attraction, The Family. A trip through the fallout shelter of a cannibalistic family, the jump scares will make you scream, but it’s the detailed sets that put you on edge. It looks as if someone actually was living there when things started going south. The detailed sets continue throughout, the next parts Damnation is equally as terrifying, but things start to get real when you’re dropped off in the mysterious, and terrifyingly huge maze.

The Maze, which is 7,500 square ft., is disorienting to say the least. An insanity maze by design, there’s no real pattern, and you could easily get lost following a path to nowhere for minutes. As if all that wasn’t bad enough, there are guys with chainsaws hidden throughout to chase you and make you even more lost.

If you do manage to get yourself out of the maze alive, take some time to go through the next attraction slowly. Torture Tank is not only the newest attraction at Hundred Acres; it is also one of their most detailed and frightening ever. Something out of a kinky nightmare, Torture Tank is everything you wouldn’t want your grandmother to see. The ball gags, chains and blood galore will make your skin crawl without question.

The final stage of Hundred Acres Manor is called Brine Slaughterhouse, and it’s as gruesome as you would expect. Slaughtered pigs, chickens, humans, really anything you can think of, adorn the walls, and it’s in this part of the Manor where the smell factor will really get to you. If you know what rotting meat smells like, you know it’s not pleasant, but like it or not, you will be bombarded with the smell the minute you enter the Slaughterhouse.

The attention to detail is what really sets Hundred Acres Manor apart. If you’re going on a tour of haunted houses around the Pittsburgh, Hundred Acres is a must-visit, and the fact that it’s all for charity is even better. For more information, directions, or to reserve tickets, click the link below to visit their website.