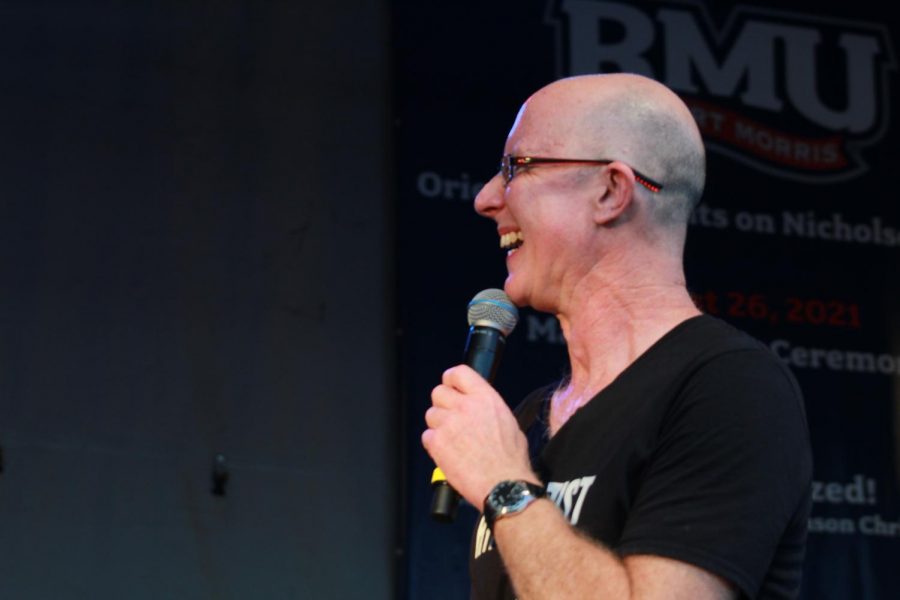 Christopher explained that hypnotism works by using states of consciousness to achieve hypnosis. He also described it as a constant state of falling asleep or like being on a cloud, light and gentle.

Participants describe it as fully relaxing, letting peace take over their mental state.

Christopher’s first exercise was for each audience member to put their arms out and imagine one hand being weighed down by a bucket of water, while the other hand was rising from “balloons” pushing up their arm. This put audience members into the right state to become hypnotized.

Christopher then walked about and put audience members to sleep, woke them up, and invited them on stage. His next trick was to put everyone he invited on stage to sleep, and while it didn’t work on some, everyone on stage was asleep by the end of the trick.

Christopher’s first command was for everyone to pretend that they were in a symphony; he changed the size of the instruments and made them play harder by having someone play better than them. He then put the hypnotized onto a “beach,” making them feel hotter and hotter as if they were in 100 degree weather.

Christopher had participants act like they were being pulled over by a cop. Some excuses from participants were: “I had to use the bathroom,” “I’m late for Thanksgiving dinner,” “I’m going to McDonald’s,” and “I just felt like it.”

For the last segment, he individually hypnotized participants. One girl was hypnotized to think that Christopher smelled horribly, and she wasn’t afraid to let him know.

Another participant was hypnotized to have his hand stuck to the back of his neck, and no matter how hard he pulled, his hand was not coming off.

Christopher also used the participants being hypnotized to give them confidence; when they woke up, they would feel less worried and more confident.

Sean Miller, was one of those hypnotized.

“I was wondering how he could possibly help me in a way. I’ve always been riddled with anxiety, so it helped a lot. Especially after waking up that last time, I feel like stuff doesn’t matter as much as it used to,” Miller said. “All I remember is that I walked straight on stage, sat down, he tapped me and it just went dark.”

During quarantine, Christopher took a hypnotherapy course since there were no live shows going on.

“(I learned that) the state of hypnotherapy helps (one’s) phobias, lose weight, and to stop smoking,” Christopher said. “The mind is incredibly, incredibly powerful, and I wish more people understood that aspect. You talk to yourself more than you talk to anyone else, and if you sit there and program your mind for negativity, you’re going to get that negativity back.”

Being a Robert Morris business program alumnus, Christopher said he has been very impacted by the university.

“If I didn’t have the foundation that Robert Morris provided me for good business practices I wouldn’t be where I am today,” Christopher said.