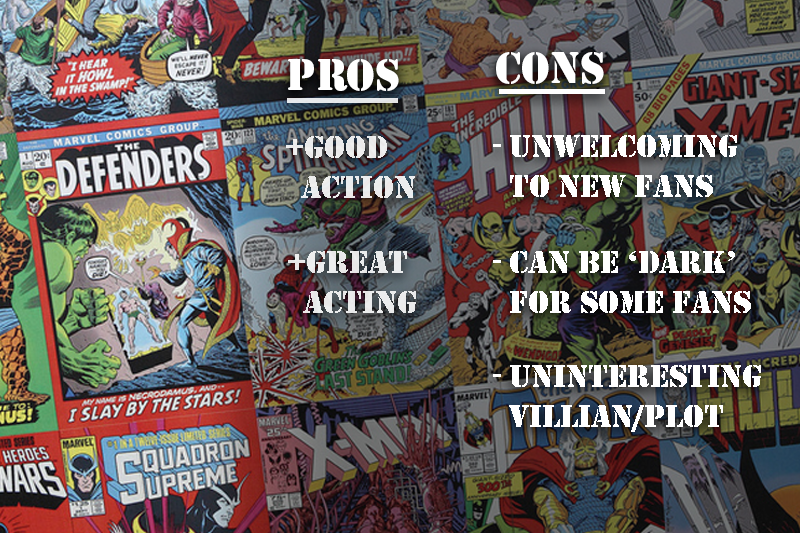 Marvel has received fan acclaim for their Netflix productions in equal magnitude to their theatrical releases, which started with “Daredevil” in 2015. Not surprisingly, it was only a matter of time before the Netflix heroes had their own big crossover series to rival “The Avengers.”

In “Marvel’s The Defenders,” released on Aug. 18, Netflix finally reveals the plot that it has been dropping hints about in each of their shows. The big questions are: does it hold up to the Marvel superhero legacy, and is the plot two years in the making worth watching?

These heroes aren’t the big names that debuted in the “Defenders” series in 1971, but their message remains the same: save the world. In this rendition of the group, the heroes all must work together to defeat The Hand, which is a criminal organization determined to achieve immortality and world domination.

There is a wealth of good material for superhero fans to find in “The Defenders.” While the combat in Marvel’s last series, “Iron Fist,” left much to be desired, “The Defenders” combat is very fluid and well-choreographed. Punches have impact, and you genuinely fear for the hero’s (and in some cases the villain’s) safety during their fights. It isn’t as great as “Luke Cage’s” combat, which featured creative choices of music and flashier effects, but it is reminiscent of older kung fu and spy movies that defined the action genre.

Another commendable part of the series is the acting. Keeping with the Netflix trend of amazing casting, the actors reprising their roles from the individual series are as strong as ever. Each character acts how their comic counterparts are portrayed with a lot of credit to Krysten Ritter’s sassy portrayal of Jessica Jones. Each character also has their own psychological complications, such as Jessica’s PTSD from the Purple Man, and portrays their character as a real person who suffers with these issues. You can believe Charlie Cox is actually blind from his portrayal as Daredevil, which is a problem most actors face in roles like his.

The series is far from perfect. Much like the first “Avengers” series, most of this series is spent trying to get the heroes to work together. Unlike the Avengers, who complete their bonding in about an hour, The Defenders takes five full episodes to complete the same thing. It can be painstakingly boring to watch five episodes worth of dialogue just for the heroes to spend two more saying how they don’t like each other. This journey of very slow and painful episodes that come before getting to the real plot is likely to drive away more casual fans.

The main villain, Alexandra, played by the talented Sigourney Weaver, also comes across as very aloof and full of herself despite the circumstances. It’s a large departure from the amazing portrayals of The Purple Man (David Tennant) in Jessica Jones or Cottonmouth (Mahershala Ali) in Luke Cage. These villains felt human and breakable as they fear just one hero working against them, but they also projected an aura of fear and power that made them feel like villains. Weaver does an amazing job performing the role she was given, but the plot and writing leave her performance falling flat.

Just like the rest of the Marvel Universe on Netflix, this show has a problem with lighting–the show feels hard to see at times. Regardless of what atmosphere the scene calls for it, the show can be hard to concentrate on due to the hazy darkness pretty much everywhere. The show also has a “dark” tone. There’s no comic relief as we see in the theatrical universe, and the excessive violence can be too much at times; albeit, not at the levels of “Daredevil’s” Season 2 and the upcoming “Punisher” series.
For fans of the other Netflix series, “Marvel’s The Defenders” brings interesting combat and another look at some of your favorite characters. For a fan of the theatrical releases, though, it’s hard to suggest this series. The excessive amounts of violence, long stretches of dialogue and uninteresting villains make it feel foreign to other lighter-hearted Marvel properties like the Guardians of the Galaxy or Avengers. It may be easy to defend the series for its shortcomings, but “The Defenders” has a lot to live up to for a successful Season 2.