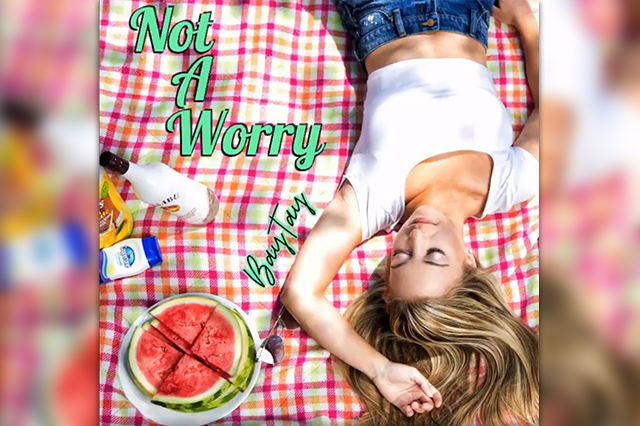 The cover art for BayTay's "Not A Worry."

MOON TOWNSHIP — When looking for the next pop-country hit of the summer, Pittsburgh may not need to look far from home for a song that brings memories of warm picnics and road trips.

Moon High School alumni Bailey Taylor has released her first single, “Not a Worry,” just in time for the hottest days of summer. Releasing the song under her stage name “BayTay,” the song full of summer vibes helps capture the mood of the season.

“Summer has always been one of my favorite seasons,” said Taylor. “I love the feeling of reuniting with all my friends, going on family vacations, the 90 degree days, being tan and not having to wear makeup, and just the overall freedom that comes along with three short months and truly not having a worry in the world.”

A Pittsburgh native, Taylor’s passion for music and songwriting started from an early age. Coming from a music loving family, which included city icon Bill “B.E.” Taylor, allowed her passion for the industry to grow and encouraged her to enter the music scene herself.

After graduating from Moon High School in 2018, Taylor moved to Nashville to further her music career. Never forgetting where she called home, the name BayTay helps link a history in the Pittsburgh area to Tennessee.

“Growing up, my family, friends, and even teachers would call me ‘BayTay’ and the nickname continued on with my friends in Nashville,” said Taylor. “I decided to make that my artist name because it stands out more and holds that special feeling from my childhood and hometown where it originated.”

Capturing iconic elements of summer, “Not a Worry” was written to remember the carefree feeling of summer afternoons and the happiness associated with those nostalgic days in the sun. Taylor sees that the sunshine and warm days seem to make everything a little better and inspire happiness in people.

“We had plans to release my first single this summer for a while, so when it came time to pick which single I would release, I knew that with all the negativity and darkness happening in our world today, I wanted to release an upbeat, happy song,” said Taylor.

The single wasn’t a single person effort, so Taylor received help from her friend and producer Andrew Manzardo and her cousin, B.C. Taylor.

“I love that I get to make music for a living, but it’s even better when I get to create it for the people I love,” said Taylor. “Working with my cousin and our good friend on my first release, especially, was very special and I wouldn’t have wanted to do it with anyone else.”

“Not a Worry” is available for streaming now on Spotify, Apple Music and other major streaming platforms.