‘Round about Pittsburgh: I Scream for Ice Cream 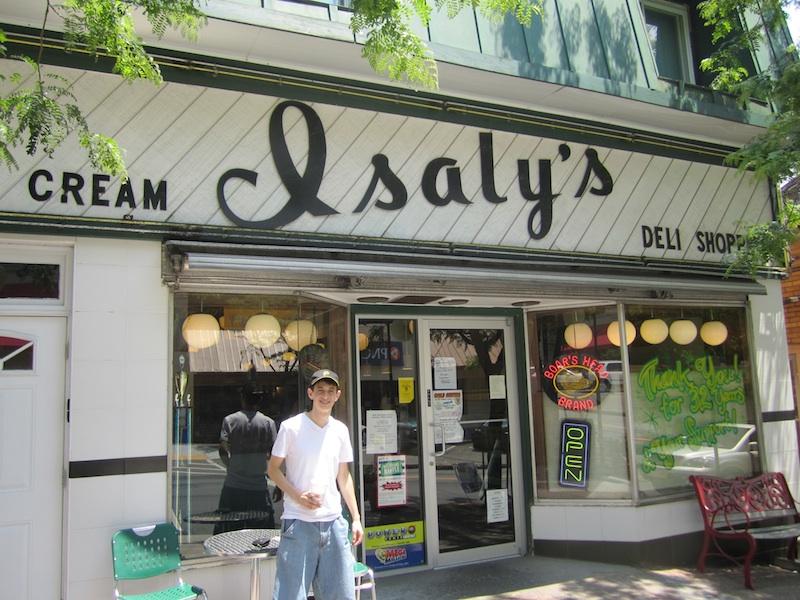 Known for the legendary Skyscraper ice cream cones, Klondikes, and Chipped Ham, the name Isaly’s was once well known throughout Ohio and western Pennsylvania.  With headquarters in Youngstown Ohio and Pittsburgh Pennsylvania, Islay’s was the first restaurant, chain grocery and deli store.  During the 1970’s the Isaly family sold the business and since then almost every Isaly’s has disappeared.  There are still a few left in the Pittsburgh region but none are like the one that recently changed ownership this past summer.

The Isaly’s in West View is the last store to feature the unique façade and interior most Isaly’s had during the company’s heydays.  Inside the store, are the original tin ceiling, meat slicer, booths, and Isaly memorabilia.  The store also displays many pictures of nearby West View Park, which closed in 1977.  Stepping inside, is taking a step back in time.

As I approached the West View Isaly’s on Thursday June 21, I was somewhat sad.  The changing of ownership was not upsetting, but that it would no longer be called Isaly’s. Because of the change in ownership and licensing fees, the Isaly’s name would disappear, but everything on the inside would remain.

On that day, a friend and I had lunch together and without amazement, the place was extremely crowded.  People of all ages were inside eating, reminiscing, and taking pictures.  After an excellent meal, my friend and I had to have Ice Cream.  After all, if it was not for Isaly’s, the world would not have all the different Ice Cream flavors people love today.  The new owners decided on the name I Shall Always Love You Sweetheart.  Also referred to as I.S.A.L.Y.S., the new name was chosen because it was used as an acronym for the Isaly’s name.  After all, I knew everyone would still call the place Isaly’s, I know I will.

In 1984, the Delicatessen Distributing Incorporated of Evans City PA purchased the Isaly’s name and remaining products.

Or for further reading about the Islay’s Company history, read