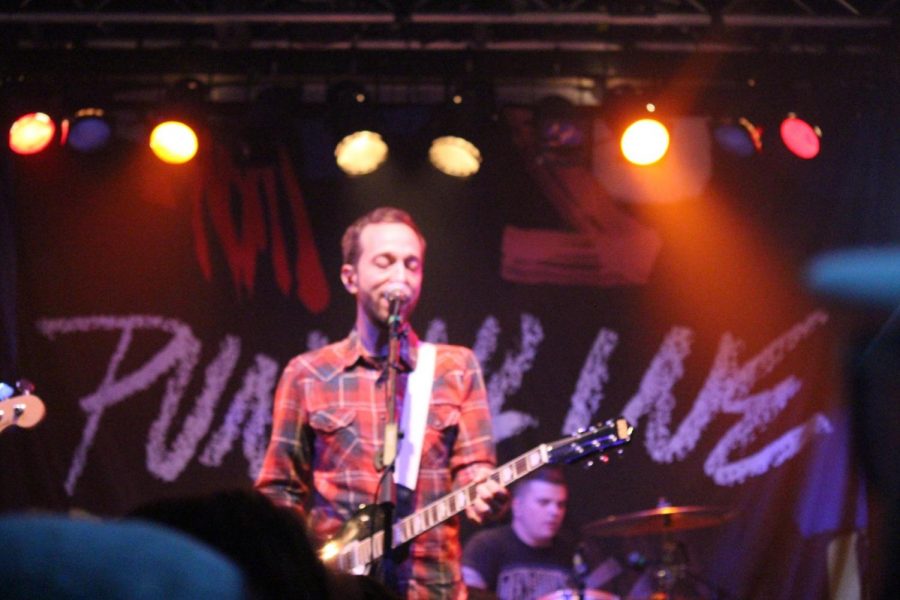 The Rex Theater held Pittsburgh’s local pop-punk proprietors Punchline on January 3, along with a multitude of other local acts such as Lotus Kid, Another Cheetah and The Composure.

With the audience filling the dark room shoulder to shoulder, Ramones T-shirts and skinny jeans, Lotus Kid kicked off the night with thumping bass lines and screeching power ballads of just how bad it is to get cheated on. While their set was relatively short, they were soon followed by the second opening act. 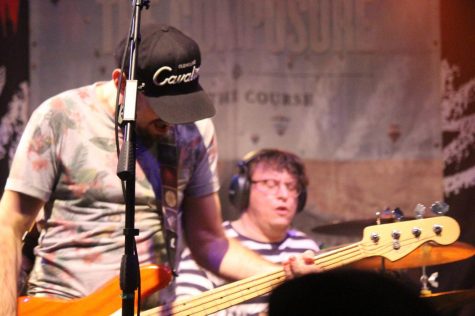 Another Cheetah is another endeavor for Punchline bassist Chris Fafalios, with him taking the role of lead singer and bassist of the group. The band is less than a year old and only has three recorded songs that you can listen to, but that didn’t stop them from keeping the show going with a harder punk version of the 80s classic “Walk Like an Egyptian.”

While the angst and anger were high commodities for the night, no mosh pits erupted. Some members of the audience had brought their children with them to the show, so it seemed no one was going too throw any blows with kids running around. 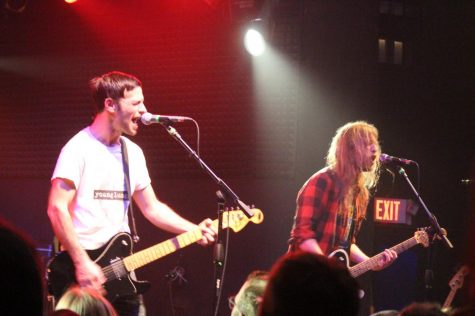 The Composure took the stage next, marking a reunion show for the tenth anniversary of their first and only full length album. While performing, these guys did something that what Weezer tried to do in the 90s. Their sound resembled Weezer’s second album, “Pinkerton,” giving it that alt-punk feel strapped with harmonizing high pitched, angry vocals.

Punchline took the stage around 10:30, with the crowd of Pittsburgh locals, Oklahoma residents, and inhabitants from Maine erupting with excitement for these guys strutting on to the stage.

While the previous acts were more intense and staying true to the original punk and alt-punk style, Punchline resembled the bands that you’d see in the mid to late 2000s pop punk scene. Lyrically and musically it was nothing super extravagant, but this also meant that they didn’t need complicated riffs and far reaching melodies to grasp the audience’s attention and affection for them.

Nothing stopped them from getting the room to move, at one point trying to capture photos of the band playing a mosh started to ensue. The children had not left, but they were sure to get out of the way. 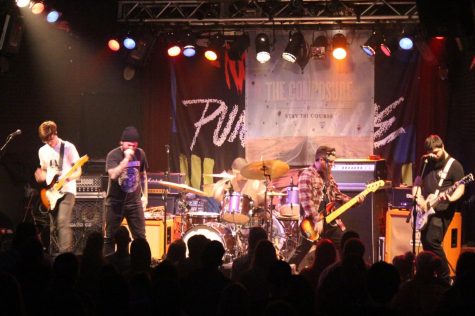 The Punchline crew had a great show, bringing local and non local fans from all over the country for a night at The Rex Theater. Being a local band, it won’t be hard to find where they are playing next in the city. In a place that doesn’t get recognized much for music, it’s good to have some tests to time that are still pulling to put Pittsburgh’s music scene on an even greater scale.

After the show, I had the chance to sit down with bassist Chris Fafailos for an interview. Punchline started out as a ska band before they turned pop punk later in their career, so he was able to explain the choices behind their sound and why they made some of their creative choices.

“What made you decide to switch your sound?”

Fafailos – “Ska was going through its third wave and that style of music was getting really popular at a time when we were still impressionable to music. I’m glad it was, because as a bassist the bass lines in ska are so fantastic and they drove me to become a better bassist.”

“We’re still a huge fan of ska and you can hear its influences in our music, it’s just not out main preference. We just decided to go another way with our sound. Ska was really big for a couple years and just as big as it was, it fell off just as hard. We wanted to stay relevant in a changing time.”

“You’re in another band called Another Cheetah, how is it different than punchline?”

Fafailos – “We wanted to have this more straight forward and ‘in your face’ sound. You won’t find the pop and ska influence like in Punchline, it’s just straight punk rock.”

“Who influenced you guys the most to start a band?”

Fafailos – “The biggest guys were NOFX, Progandi, anything really on Epitaph. NOFX was a really big one because they were a punk band, but what they did was so creative it just took hold.”

Punchline were originally on Fueled by Ramen Records, but in 2008 decided to leave and start their own independent label called Modern Short Stories.

“What made you switch from Ramen to Modern Short Stories?”

Fafailos – “When we signed to Ramen, it was ran out of a one room place in Florida. At the same time, Fall Out Boy had just signed with them. Then Paramore, Gym Class Heroes followed too and it became this huge thing. All these bands were on an independent label, but also had a major record labels backing them with other deals. We were the only ones that didn’t, so we felt like the low man on the totem pole.”

“How did this affect you guys as a band?”

Chris- “We just decided as a group that maybe we need to go our way and do something on our own. We don’t have these big backing deals by major labels, so we decided to head in our own direction with ‘Modern Short Stories’ and we saw how music was going in a different direction with iTunes. We decided to try our own thing and see if we can progress with the times.”