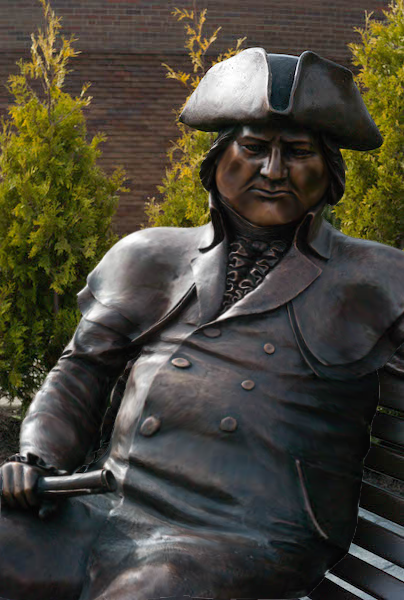 An edited image of what Bronze Bob should actually look like.

This has been bothering me for a while now and I can’t keep my silence any longer. Last year, the graduating class of 2013 presented RMU with a lifelike statue of our schools namesakes, affectionately referred to as “Bronze Bob.” Now don’t get me wrong, I like Bronze Bob, I think it’s a great looking statue and I love seeing people sit next to him, but as fun and cool as he is, there’s one aspect about him that troubles me.

A very wealthy merchant from Pennsylvania, Morris was a partner at a firm called Willing, Morris & Co. It was through this firm in which he provided services such as shipping, real estate and even slave trading (for the record he left the slave trade business after one year and never actually traded a single slave), and it was through these services that he garnered his vast wealth.

These lucrative business dealings enabled Morris to live a very comfortable and lavish 18th century lifestyle. He helped fund the revolutionary war, signed the Declaration of Independence, the Articles of Confederation and the United States Constitution, and was even one of the first two Pennsylvania U.S. Senators. He was immensely powerful, immensely important, but it cannot be forgotten that he was also fat.

Our beloved Bronze Bob statue does a great job at highlighting the mans gravitas and legacy, but when it comes to stature, the representation is a bit thin. In fact, the body type is so different from reality; one could understandably come to the conclusion that the statue isn’t even of Robert Morris. I’ve heard plenty of theories on who the statue could actually be modeled after, but the two that come up the most seem to be Thomas Jefferson and Paul Revere.

I personally lean towards Thomas Jefferson, but either way I think it’s a shame. It’s 2014; can’t we be proud of the fact that our schools namesake was an overweight man? Can’t we accept him for who he was, and let his defining statue represent him adequately? I know that changing the statue would be expensive, but can we at least stuff some pillows in his shirt until another class agrees that their gift should be the proper alterations to the big guys waistband?