When you mention pop-punk band blink-182, you are sure to get a big reaction from people. Sometimes, that reaction is a positive one due to the number of popular singles the band released in the early 2000s like “What’s My Age Again” and “All The Small Things.” Others respond negatively and write the band off as “whiny” and that all of their songs “sound the same.” Either way, the band knows how to get people talking.

One of these times that the band entered the discourse was in 2016 when they released their album “California.” The album reached number one on the Billboard charts and knocked Drake’s “Views” off the top in the process. It was the first album to feature Matt Skiba of Alkaline Trio on vocals and guitar. Skiba replaced founding member Tom DeLonge, who left to pursue other projects.

You may recognize DeLonge’s name from recent headlines he made by getting the Navy to admit that UFO footage he helped release was indeed real. Skiba joins bassist/singer and founding member Mark Hoppus on the record and drummer Travis Barker rounds out the lineup on “Nine.” With the background and personnel covered, let’s get into the album.

The trio released a number of singles leading up to the album, five to be exact. I’ll be honest, these were arguably the worst songs on the album. I am not sure if they were trying to troll people, but compared to the rest of the album these songs are uninspired and way too overproduced, with heavily filtered vocals and guitars creating more of a pop vibe than a rock or punk sound.

There were two singles that I enjoyed, even though I don’t think they are perfect. I was able to jam out to “Darkside” and “Happy Days” on my commute to my internship this summer when they were released. “Darkside” was the first song that felt like a traditional blink-182 song. It starts off relatively slow, but the song begins to pick up and the chorus makes you want to roll down the windows and scream the lyrics while taking a drive with friends. Despite the song being solid, do not watch the music video by any means necessary, unless 40-year-olds playing their instruments around a bunch of kids doing Fortnite dances is your cup of tea.

“Happy Days” is a much slower song, a nice change of pace compared to the other singles. This song talks about not listening to the doubts in your own mind and yearning for happiness despite the negativity in your mind. This is the most personal single off of the album, and despite the lyrics being pretty simple, Hoppus is able to get the listener to relate to the message and feel something when listening to this song.

Now that the singles are covered, we can get into the rest of the album. “Heaven”, the third song on the album, does a great job of sounding like a classic blink-182 song. A 2018 mass shooting that occurred not too far from Barker’s home inspired the lyrics to this song and listens can feel a wave of emotion when they pay attention to the lyrics and their context. Personal songs that address real issues are nothing new for blink-182, who released “Adam’s Song,” a song about suicide, back on their 1999 album “Enema of the State.” It was refreshing to hear them addressing real issues in their music once again.

Another track that I enjoyed was “No Heart To Speak Of,” a song that has a heavy Matt Skiba influence. Skiba didn’t really put his own touch on much of “California,” but this song proves why he needs to take a front seat in the songwriting process. His passionate performance and intense vocals, in addition to the heavy drums and guitar, send chills down your spine. This is the best song on the album, hands down.

Overall, “Nine” is exactly what it needed to be. Several of the elements that made blink-182 a world-famous band for two decades are evident in this album. Lyrically, the album is rather simple, but the band is able to get the listener to feel something due to the hopeful, nostalgic, gloomy, and sometimes excitable nature of those lyrics. The drums are powerful as always due to Barker’s strong performance behind the kit. The guitar and bass sound is rather overproduced throughout the album, but that doesn’t exclude how powerful those instruments sound during the choruses of the songs.

Blink-182 is able to create fun, yet meaningful songs that make the listener want to jam along. Hopefully, in their next album, Skiba gets even more creative freedom. I hope that the overproduced guitar and vocals go by the wayside as well. For now, I will continue to enjoy this album and play the majority of it on full volume. Blink captures the themes of their old style while incorporating just enough change to show that the trio isn’t content on sticking to one formula.

Least favorite songs: “Blame It on My Youth”, “I Really Wish I Hated You”, “Ransom” 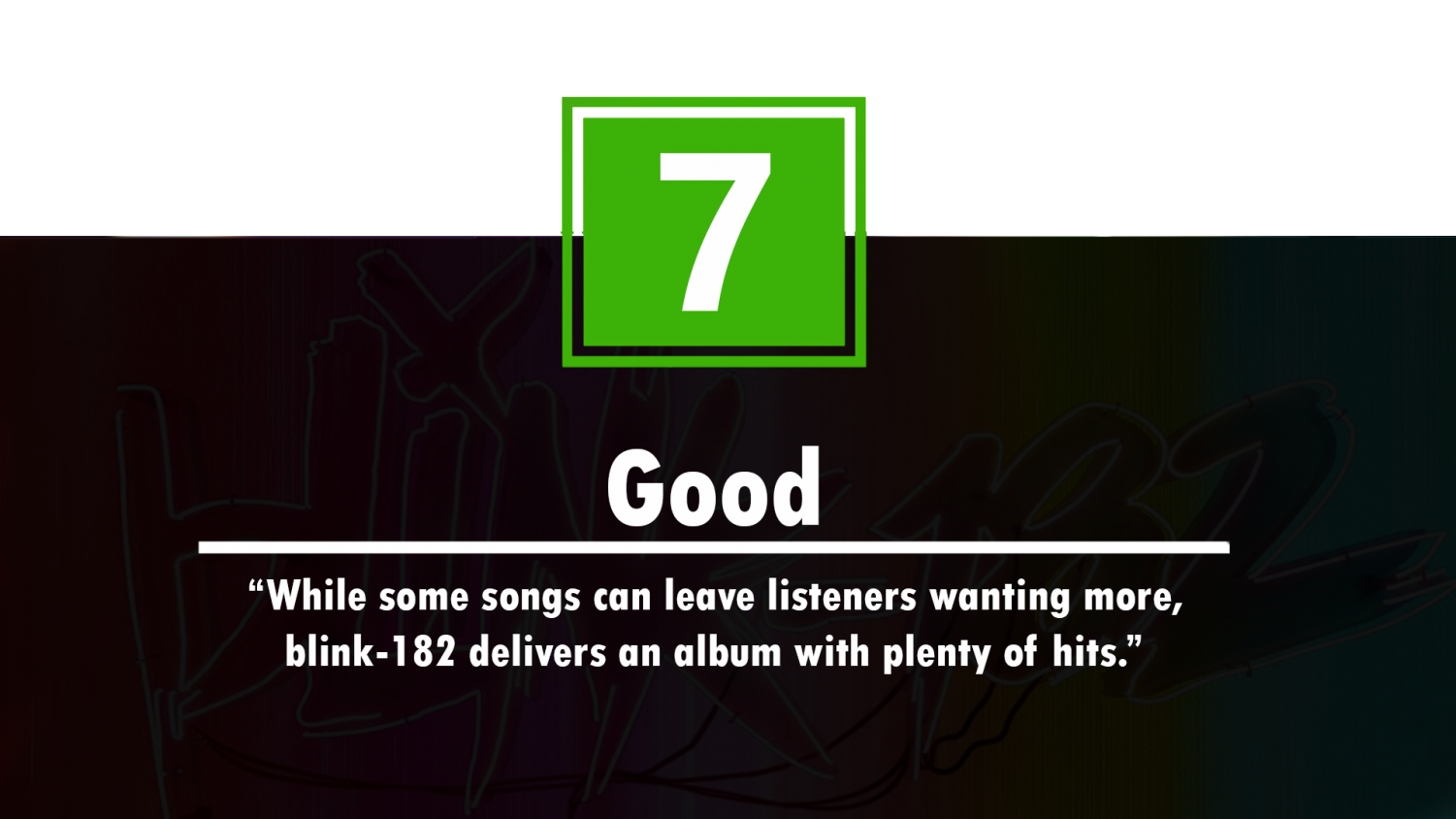