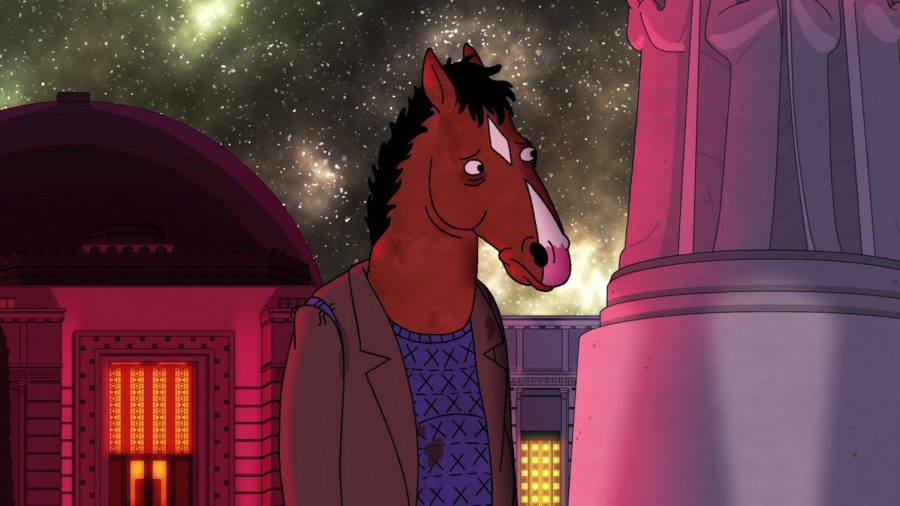 The acclaimed Netflix animated show “BoJack Horseman” ended on January 31, marking an end of an era for Netflix. “BoJack Horseman” was one of the shows that defined the early days of Netflix. Along with “Orange is the New Black” and “House of Cards,” it was one of the first successful Netflix originals, and arguably the best even as the streaming service continues to pump out multiple originals a week.

At the end of the first half of season six, it appears that the titular character has finally tackled his depression. As anyone that suffers from depression would attest, that things aren’t that simple. Yes, BoJack is better off because he is now sober and has a job that he is happy with, but all of his past mistakes are about to be put into the spotlight. BoJack will be tested for the first time since he has gone completely sober and that sets up the second-half of the season.

It’s not just BoJack that deals with his depression though. All of the main characters have to deal with their own problems. While Princess Carolyn finally finding a partner and Todd reconnecting with his parents are certainly good story lines to follow, it’s the stories surrounding Diane and Mr. Peanutbutter that stood out to me. 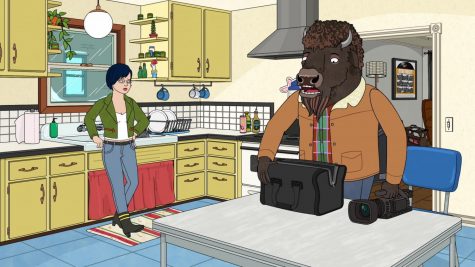 At the beginning of the show, the two are in love and about to get married. At the midway point of season six, both have found someone new, but are in two completely different relationships. Mr. Peanutbutter, who has three ex-wives at this point, is in a relationship with a much younger dog named Pickles.

His relationship is falling apart, and he tries ridiculous ways to fix it even though it’s clear to everyone that this isn’t a relationship that should be saved. Eventually she leaves him, but instead of immediately jumping back into another failed relationship, Mr. Peanutbutter learns to be happy and live by himself. It’s character development for a character that you didn’t expect to get any development. It’s also the most relatable way to show breakups and the toxicity of immediately jumping into something new instead of trying to be happy on your own. 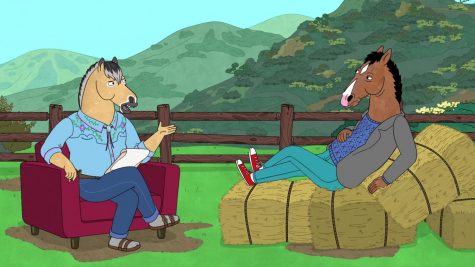 Meanwhile, Diane finds true love with her new boyfriend, however her depression threatens to ruin it. Diane is struggling to write a memoir, so she goes off her anti-depressants in order to get the book done, causing strain in her relationships. Diane eventually goes off her medication not long after she finally meets the son of her current boyfriend.

His son immediately rejects her, insisting that his parents still love each other and will get back together, but it is that same character that causes her to want to go forward. His son eventually finds her book, not the memoir she was struggling to write, but a fun teenage detective series that she managed to write, and finds the book relatable. It’s that moment that triggers a change in Diane, to go forward with the detective series and finally be happy with her life.

But none of these story lines even compare to the moments that the main character, BoJack Horseman, suffers. BoJack is finally happy, but a phone call from a former close friend sets him back to reality as he realizes that all the awful things he did due to his addictions and depression are about to come into the public light. 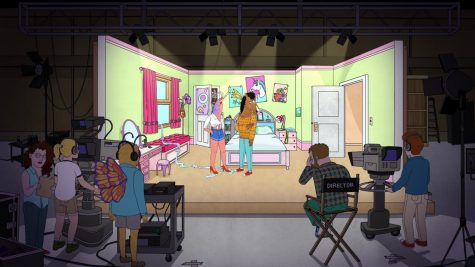 When it does come into the public light, he successfully minimizes the damage by going on an interview. This causes people to view him as an inspiration, instead of a criminal, which in turn leads BoJack to arrogantly do another interview, only to see that backfire and destroy his public image.

He then relapses and it’s heartbreaking. He loses his house and some of the closest people in his life leave him. Eventually, he goes on a bender and meets with a studio executive who reveals an appalling truth about Horsin’ Around’s, BoJack’s signature television show, final days. He then breaks into his old home and, just like the title sequence has been hinting at for six seasons, finds himself face down in, what used to be, his swimming pool.

The following episode is arguably the series best. Taking place entirely in BoJack’s mind and not knowing if it’s a dream or some version of Heaven, BoJack is visited by all the side characters that died during the show’s run. They perform for BoJack, including one tear-jerking poem about regretting jumping off a bridge to suicide after being halfway down. It’s surreal, that same character earlier in the episode said that the best moment of his life was his suicide, but now, halfway down, regrets his decision. 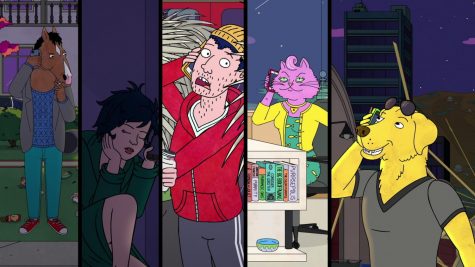 The penultimate episode is the true ending for the show with the final episode serving as a nice epilogue to the series. This has caused some criticism, but I feel that’s the best way to end this show. It ends with the people closest to BoJack deciding to not live with him in their lives. It’s bittersweet, and that’s the perfect way to do show how people closest to you can filter in and out of your life, but each one will always have an importance in your life for shaping you into the person that you are.

The penultimate episode is the perfect way to end the series, but the final episode, despite still having its’ quality moments, does hurt the impact from some of the previous episodes. “BoJack Horseman” is a show that anyone who is suffering from depression needs to watch.

It tackles suicide, the feeling of it being necessary, but the instant-regret when the decision as already been made. It addresses break-ups and how to recover from the depression suffering after one. It addresses unexpected loss, addiction, over-working, poor family relationships, the stigma of mental health and so much more.

It’s a show about a talking horse, a cat, a dog, a depressed writer and a slacker that feels more real than anything on television today. There was never anything like it and there won’t be anything like it ever again.