“IT Chapter Two” picks up 27 years after the first film ended, where the Losers Club stopped the evil creature known as Pennywise and promised to kill the creature if it ever came back to Derry. The sequel sees their fears come back to life, leading to the Losers Club, now adults, to come home and kill the evil Pennywise for good.

Clocking in at two hours and 55 minutes, the film takes the audience on an adventure of horror, drama, romance and even comedy. The horror is executed well, using the element of surprise with multiple jump scares and terrifying kills.

The drama aspect of the film dives into the characters’ lives and where they are now compared to 27 years ago and from when they last saw each other. However, it does not capture their own individual lives as in-depth as the beginning of the book does. This is a small disappointment, as the characters’ lives in the book makes it interesting to follow and makes the audience care about each character more.

The romance sub plot was captured well and does not drag out. However, the audience does not root for the characters to get together romantically in this movie as they did in the first. In the first movie, you were able to connect with the characters and feel what they are feeling. In this movie, however, the audience does not feel the connection with the older cast that they did with the younger cast.

The comedy, which worked really well in “IT,” does not work as well in the sequel. In the first installment, humor was used as comic relief, which is much-needed in a Stephen King film adaptation. However, the comedy is used far too much in the sequel and takes up more of the movie than it should have. The adult Richie Tozier (played by Bill Hader) is now a famous comedian, so it would be expected that there will be some comedic moments from this character. I believe that Hader delivered way too much comedy and that he was unimpressive as Richie until the third act of the movie.

The villain of the film, Pennywise, played by Bill Skarsgard, is a iconic character that fans had come to love in the first film. In the sequel, Skarsgard is not in the movie nearly as much as the first installment. This leaves the audience a bit disappointed, as Pennywise is a very unique and fun character to watch on screen.

In conclusion, “IT Chapter Two” was a great follow-up to 2017’s “IT.” However, it did not feel as special as the first one did. The first one made the audience relate with the Loser’s Club and feel terrified whenever Skarsgard’s Pennywise was on screen. Although “IT Chapter Two” has some aspects of that, it is evident that “IT” is the better film of the two. 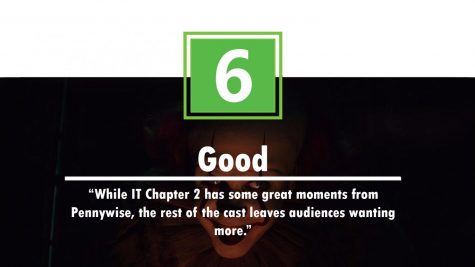