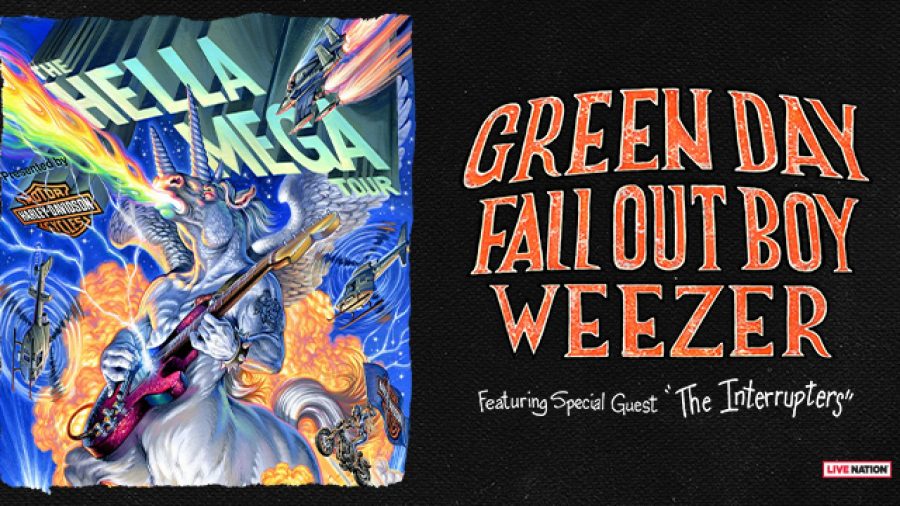 Some of the biggest names in the alternative music scene — Green Day, Fall Out Boy and Weezer — announced that they would be doing a joint tour starting in 2020. All three groups released new singles to promote this tour, with Green Day and Weezer taking the opportunity to promote their new albums releasing in 2020. All three groups offer up amazing teasers to what is amounting to be an amazing tour.

With a tour date stopping in Pittsburgh’s PNC Park next summer, the singles are also a good way to get excited for the upcoming show. The question remains: are the new singles a flop, or a brand new performance for the Steel City to get excited for?
Green Day’s “Father of All…”

Green Day’s single “Father of All…” is the title track of their newly revealed album. If this teaser is indicative of what to expect from the rest of the album, then I am absolutely looking forward to what Green Day is offering. The fast-paced, new-age drums and slick guitar riffs give me chills. The song has a vibe that I haven’t felt from a Green Day song in a long time. It’s like they blended the styles of older songs like “Welcome to Paradise” and combined it with their newer style seen on their 2016 album “Revolution Radio.”

My only gripe with this song is that Billie Joe Armstrong’s voice is distorted throughout the song. While this is more commonplace with smaller alternative groups, it makes me forget that I am listening to one of the most well-known names in music. This is a misstep in what was almost a surefire success for me. If you are a die-hard fan of Green Day, then you might love this song, but otherwise it won’t find itself in my favorites.
Fall Out Boy’s “Dear Future Self”

Next up in the Hella Mega Tour’s lineup is Fall Out Boy. Out of the three groups, they are the only one that are not promoting a new album. Their single titled “Dear Future Self (Hands Up)” features rapper Wyclef Jean and is absolutely fantastic. The song reminds me a lot of their style from their 2015 album “American Beauty/American Psycho.” The guitar riffs and lightning fast lyrics from both Patrick Stump and Wyclef Jean make me feel like summer never ended.

I feel as though this song definitely would have been the song of the summer if only it didn’t release in September. In terms of problems, the only issue I have with “Dear Future Self (Hands Up)” is how short it feels. One moment I’m listening to a summer-saving bop, then the other I’m back at the mercy of the shuffle button. This song excites me greatly for what Fall Out Boy will offer for this upcoming tour.
Weezer’s “The End Of The Game”

Finally, but certainly not least is Weezer and their single “The End of the Game.” This single is to promote their upcoming 2020 album “Van Weezer.” My personal favorite group of the three announced, I was sure that this song wouldn’t disappoint me.

I was absolutely correct as this song combines some of my favorite elements from all over Weezer’s discography. This song especially takes me back to recent albums like “White Album,” “Pacific Daydream” and even “Everything Will Be Alright In The End.”

It also combines fantastic guitar work with chills-inducing singing by Rivers Cuomo. Every low note that Cuomo hits gives me a euphoric experience that you can only find in a Weezer song. “The End of the Game” is certainly some of my favorite work done by the group and only makes me even more excited for the Hella Mega Tour.