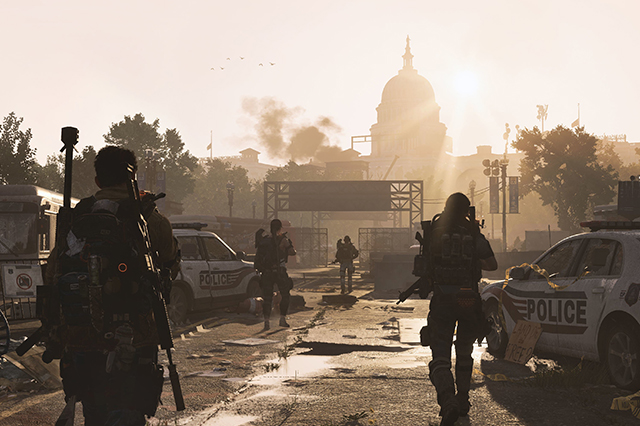 A view of the Capital in "Tom Clancy's The Division 2." Ubisoft.

The beta, which ran Feb. 7 through Feb. 10, allowed players to experience the first mission of the full game as well as two additional missions. Players take the role of an agent sent to Washington, D.C. seven months after the events of the first game. The beta offered only a small portion of what the game has to offer when the when released March 15, but it does give players their first taste of how the game play will work.

The first thing players will notice is that “The Division 2” is bigger than its predecessor. The game takes place in Washington, D.C., with huge streets and random debris spread throughout. It does a good job of displaying a natural environment that would arise from an apocalypse.

While the series depicts a grim future in the darker Manhattan, the series decided to take a new direction with its scenery for the sequel. The greenery and cityscape of the nation’s capital creates a feeing of hope for the future with a new and exciting environment to explore.

“The Division 2” doesn’t change much of the control scheme from the original, but that isn’t a bad thing. Moving from cover to cover is just as quick and simple as it was before. Aim and hold the “X” button and your character will seamlessly move from behind one wall to whatever you are pointing at.

However, enemies are now smarter and will come up with creative ways to force you out of your safe position. Enemies will launch drones, try to flank you and pepper your last known position with grenades — making sure that you are never in one spot for too long.The game still does a good job of making every encounter do-able, even while playing without a party. There wasn’t a single mission that felt impossible.

After finishing the two main story missions available, three endgame characters are unlocked for the player to try out. Each character has its own specialization with a singular invasion mission available for players to get a taste of what “The Division 2” will offer players after they finish with the main story. Each specialized character has their own special weapon that complements the roles they are supposed to play in multiplayer modes.

The “Invasion” mission features a new class of enemies that are more advanced than anything you would play against during the main story. The game requires players to be more strategic, listen to the AI call out positions and attack in coordinated efforts. It makes the endgame feel like a much more difficult trek through Washington, D.C. than what the main story had to offer.

The game also allowed players to play in the “Darkzone,” which offers player versus player combat. The Darkzones have been reworked from the original with each Darkzone instance being created by normalizing player stats in order to make each instance more fair. The Beta offered a small look at only one of the Darkzones.