I documented my 52+ hour long Bond marathon to save you the experience. 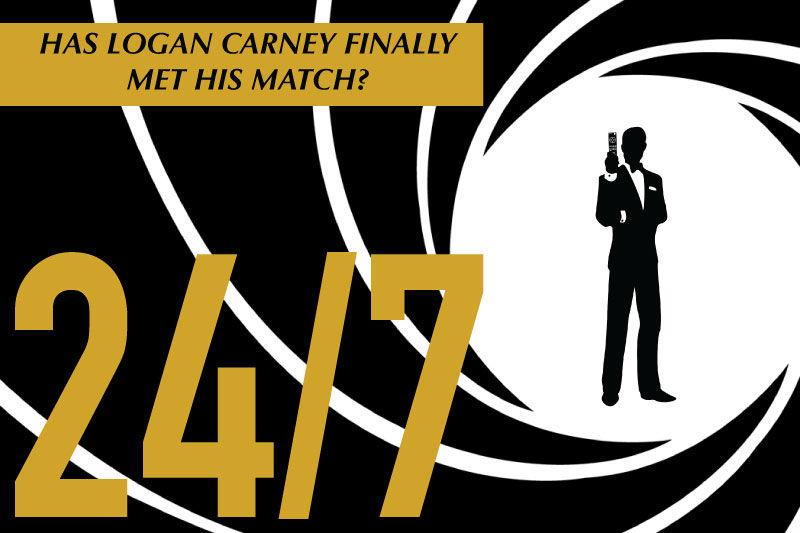 Back in November, I watched all 24 James Bond movies in a single-sitting to accomplish what is truly a man’s greatest possible movie marathon. I did it so that you wouldn’t have to.

If you’d like to read a timeline that documents my events, you can read my Twitter thread and watch me slowly descent into madness watching the same series and getting six hours of sleep over a four-day period.

I was lucky to be joined by my friend and co-worker here at RMU Sentry Media, Gabriella ‘Gabby’ Rankin. Gabby has never seen a single James Bond movie, but was vital to the marathon as she counted numerous statistics and prevented me from quitting this giant endeavor.

We started the marathon at about 4:00 p.m. on a Friday afternoon, which made us both pathetic and idiotic to start something that long on what should be the time to go out and have fun. Nonetheless, the thought of being able to say that we pushed through the greatest British film series in history was too alluring to pass up, so we decided to waste our weekend on this feat.

The marathon started with the classic “Dr. No,” the movie that essentially createdthe character of 007 and the spy genre as a whole. “Dr. No” introduced us to the Sean Connery Bond, a womanizing, sophisticated tough guy who probably wouldn’t fly in today’s world. Regardless, Connery’s Bond is still the gold standard of the 007 persona.

“Dr. No” was phenomenal and made us think that the movie marathon wasn’t such a bad idea. That thought goes into the next movie, “From Russia With Love,” before we hit “Goldfinger.”

Perhaps the most energizing scene took place in the movie following “Goldfinger” as “Thunderball” brought harpoon guns and underwater slow-motion battles to the series. It was absolutely absurd and we loved every minute of it. The harpoon guns were perfect for waking us up as we approached ten hours of Bond films.

As Connery’s Bond came to a close, broken up by a solo, and good, George Lazenby offering, we moved on to the longest-running Bond, and easily my most hated, Roger Moore. Moore’s Bond started out interesting enough, more fun and ridiculous than Connery’s portrayal of the character. As the series progressed, and as my mind deteriorated from only having a quick nap in the middle of this marathon, I grew to question my sanity and what I was watching.

Moore’s Bond was easily the most difficult part of this marathon, especially since we hit him in the early hours of Saturday morning. While I do love the ridiculous that James Bond can bring, Moore’s Bond was campy beyond recognition. From the absurdity “Moonraker,” to my favorite henchmen Jaws falling in love and a weird Louisiana police chief, the films began to become unbearable.

All of this comes to a head during Moore’s last offering, “A View To A Kill,” which is easily the worst James Bond movie ever made.

At this point in the marathon, I needed a miracle to stay awake. Luckily Duran Duran’s “A View To A Kill” came on and my whole will to live was re-energized. It was exactly the boost that I needed to keep going, unfortunately, there wasn’t a worse movie to hit early into Sunday morning.

The movie though, was excruciating. The villain, a blond Christopher Walken, is trying to flood San Francisco so that he can corner the world’s microchip market.

Yes, you read that motive right.

James Bond, a now 60-year old Roger Moore, is tasked with tracking him down. He falls for Walken’s henchmen, who is about a third of the age of Moore, making for a very uncomfortable experience. The movie includes a ridiculous car chase in a fire truck and sees the villain randomly, and for no reason, kill all of his workers. All of this comes to a head at the Golden Gate Bridge after Walken and his Looney Tunes looking henchmen try to leave in a blimp but see it get stuck on the bridge.

At this point, Gabby was asleep. I didn’t want to wake her for the monstrosity that was making me question my entire life up to that point. As a monocle wearing rejected cartoon villain threw sticks of dynamite at James Bond from a blimp that was connected to the top of the Golden Gate Bridge, so many thoughts poured through my head.

“Why am I doing this?” “What has my life come to that I thought this would be a good idea?” “Why does a microchip manufacturer with a high-tech blimp not have a more time-period relevant weapon than an ACME stick of dynamite?”

Luckily that movie ended and so did Roger Moore’s James Bond career. This led us into Timothy Dalton, who was the exact opposite of Roger Moore’s Bond, which was an extremely refreshing experience. Dalton’s two outings are easily the darkest of the franchise, as we watched men get half-eaten by sharks, but the darkness of it was a perfect follow-up to the disaster that is “A View To A Kill.”

Dalton’s movies though, after three days of maybe four hours of sleep, were tough to sit through for that reason. They were more like noire films than spy capers and required a mind that wasn’t pounding from a headache.

As we crawled through Dalton’s bond saga, something happened that almost ended the whole series. The power in my dorm room at Yorktown went out.

It was devastating, and since Gabby had a class Monday morning, made us worry that the marathon might not be completed. After sitting through more than half of the 24 James Bond EON Productions movies, could our marathon really end this way?

After staying up for thirty minutes during the power outage, I decided to take a nap. I awoke approximately four hours later for the final time, the situation did not allow me to stay asleep for all of those hours though, and the power got turned back on. Gabby and I acknowledged that we can finish the marathon by starting right away, although she would have to miss the final movie.

So we continued into Pierce Brosnan’s “Goldeneye,” which was the first James Bond movie to not take any story elements from a novel. It was phenomenal and brought Bond back to the way Sean Connery made him. The best thing though, easily in this movie, was the introduction of Judi Dench as “M.”

Dench’s “M” was funny and tough. She was threatening and clearly made for the role. She delivered an incredible performance throughout the Brosnan films and into the Daniel Craig movies. As the Brosnan movies got worse and worse each time, Dench was always there to give me something to watch.

Finally, on Sunday night, we reached Daniel Craig. Craig’s Bond is similar to Dalton’s and was made in response to the Brosnan films relying too much on CGI, gadgets, and campiness. He was a damaged Bond, something that we haven’t really seen outside of Dalton’s performances.

Most importantly, Craig brought back the insane stunts that haven’t been seen in a Bond movie since the Connery days. “Casino Royale” is tense at every moment, especially during the poker scenes, and brought a level of emotion that Bond has never had. “Quantum of Solace” is basically the second half of “Casino Royale”, but then “Skyfall” comes and we get one of the best Bond movies.

After “Skyfall”, Gabby had to leave. I decided to take one last nap before watching the final movie, hoping that a couple of hours of rest would allow me to clear my head for “Spectre.”

That didn’t really happen and my brain was still fried heading into the last movie. After running on maybe a combined 6-8 hours of sleep over four days, I finally reached the very last James Bond film.

“Spectre” was decent, not the Bond movie I’d want to watch at that hour, but it brought back the most iconic villain in Blofield, who hasn’t been seen since Roger Moore ridiculously killed him while he was in a wheelchair during an opening credits scene, and it had some more emotional punches.

While the villain’s motive is arguably worse than the microchip fiasco, this villain creates an entire evil organization to ruin Bond because Bond was adopted into his family and his parents loved Bond more. The movie has some nice moments, and is an okay film and a solid way to end the marathon.

So, after 52+ hours of James Bond, I can honestly say that it was worth it. I feel accomplished and, even with my brain being fried during that marathon, am interested in doing it again.

I’m sure you’re wondering my thoughts though on these age-old questions. The best James Bond is Sean Connery, no doubt. He is everything that makes the character. The best movie is till “Goldfinger” followed closely by “Casino Royale” and then “Skyfall.” The best henchman is Odd Job and the best Bond girl is easily Pussy Galore.

There’s still one more Craig movie left though, so the marathon will have to start over again, another day. I just hope “A View To A Kill” does not come on in the wee hours again causing me to lose my sanity.