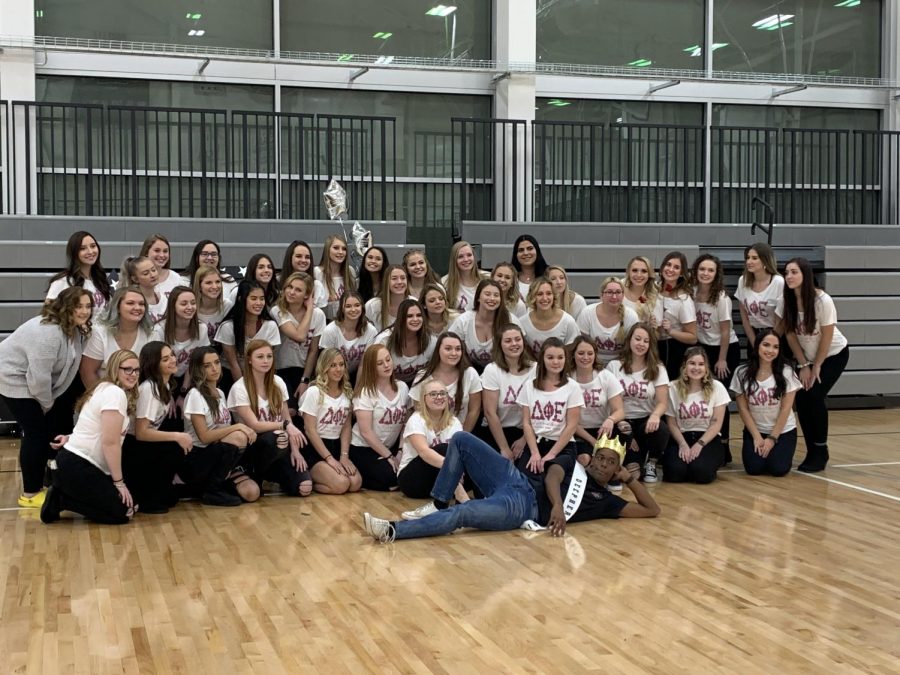 MOON TOWNSHIP — The Robert Morris University Chapter of Delta Phi Epsilon hosted their “Deepher Dude” charity fundraiser in the North Athletic Complex on November 14. Ten “dudes” representing organizations from across campus came together to raise money for a worthy cause.

The fundraiser is an annual male-only beauty pageant where volunteer contestants compete for the coveted title of “Deepher Dude.” In addition to seeing members of the campus community perform, it also served as an opportunity to raise money for the Cystic Fibrosis Foundation.

“The concept of a male beauty pageant is foreign to an American audience,” said Terryaun Bell, the 2019 winner of “Deepher Dude” and the contestant representing RMU’s Phi Mu Delta chapter. “People get to see their male friends perform and it provides a different aspect, so it becomes more common.”

“An alumni of Delta Phi Epsilon, I believe it’s one of her kids, has cystic fibrosis,” said Stephanie Barth, Terryaun Bell’s coach and a member of the Delta Phi Epsilon chapter. “It’s just a philanthropy we’ve been involved with.”

The event starts before contest even think of hitting the stage. Male volunteers were first paired with members of Delta Phi Epsilon. The sorority members served as coaches for the volunteers before the contest and helped train them for the question and talent segments.

“(Stephanie) really helped me.” said Bell. “I really thought I was going to have to do everything on my own and she was a huge help and I was really grateful for that.”

“This is my second ‘Deepher Dude,’ my first one coaching,” said Barth. “He did most of the work, I just provided guidance. I wasn’t sure if I would be good enough, but it was a good time.”

The event started with all 10 contestants dancing choreographed to Beyoncé’s “All the Single Ladies” and Ginuwine’s “Pony.” The dancing gave spectators a taste of what was to come.

With the audience fired up, host Fred Hodges began the questionnaire round. In the first round of questions, contestants were asked simple questions such as “What is your ideal weekend?”

After all 10 answered their respective questions, Hodges began asking questions more focused on cystic fibrosis, such as “How many people are affected by cystic fibrosis?” These questions were asked to provide more information and to raise awareness for the condition.

After the questionnaire round and a brief dance contest between audience members came the talent round. The segment included some amusing talents such as Delta Tau Delta representative Taylor Burns singing his version of ABBA’s “Super Trouper” or Phi Sigma Kappa representative Josh Ribbon’s dancing. Capping off the night was RMU’s own John Tucci, who sang Neil Diamond’s “Sweet Caroline.”

Representing the Phi Mu Delta chapter, Terryaun Bell won the coveted title of “Deepher Dude.” This is the second year in a row that a Phi Mu Delta member has won the pageant, with last year’s contestant Jacob Savage performing an impressive dance routine.

“It feels great to carry on the tradition of such a powerful, powerful position,” said Bell. “Knowing that is me now, it’s like what can I do?”

“I’m so proud of him, I’m having a proud coach moment,” said Barth. “(Bell) deserves it, I knew he was killing it from the start.”

Not only did Bell win the competition, but the Delta Phi Epsilon chapter also managed to raise $4,100 at the event.

“Raising money for the Cystic Fibrosis foundation is one of the biggest things we do here at Delta Phi Epsilon.” said Barth. “We’re so grateful for everyone who came out to donate and to help out.”