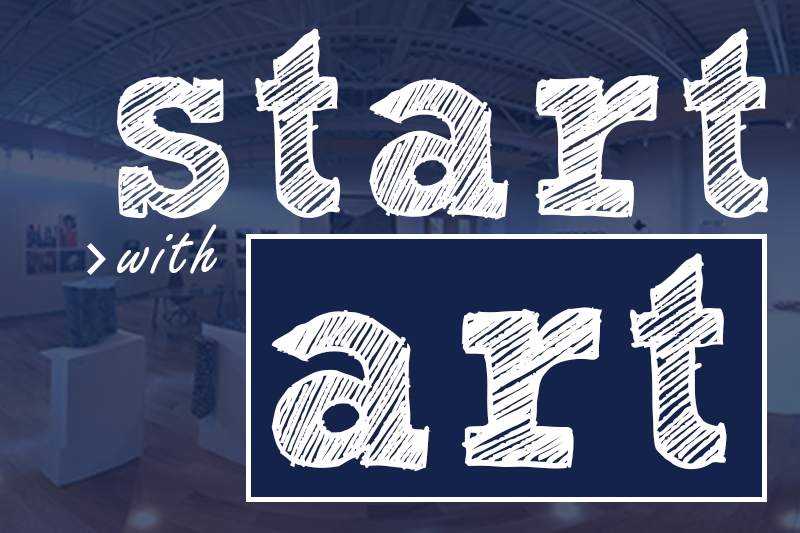 The “Start with Art Pittsburgh: A Retrospective” exhibition had its opening reception on Oct. 5, 2017 in the RMU Media Arts Gallery.

Start with Art is a program where artists, primarily photographers, are assigned a month, and each artist submits prints of a piece to be given to newborn children born during that month in the Pittsburgh area. This program has been going on since 2015, and nearly 10,000 babies have been gifted with prints.

There are a number of notable pieces on display. One that caught my eye was a piece that was titled “Girl with Bubbles” by Martha Riel. It was a photograph of a young girl blowing bubbles. But rather than focusing on the bubbles close to the camera, the photo was focused on the girl. The effect this had on the girl made the piece aesthetically pleasing as well as interesting to look at.

Another piece was a spherical image that was shaded with hatching by Lenka Clayton. It was titled “Moon, October 2017,” but at the same time, the hatching design was reminiscent of the land patterns on the Earth. It brought interesting comparisons to mind between the Earth and the moon while also being pleasing to look at.

A last piece that drew my attention was “Fireworks” by Dylan Vitrone. It was a black-and-white photograph that captured fireworks through a bedroom window. The contrast between the pale, worn-out bedsheets and the sparkling fireworks on the other side of the window glass made the photograph simplistically memorable.

Matthew Conboy, a part-time RMU professor, created the Start with Art: Pittsburgh program based on his discovery of how few opportunities his students had to experience art for themselves.

“When I first started teaching at RMU in 2008, I was surprised by the number of my Media Arts students who had never visited the Carnegie Museum of Art, the Warhol Museum, Mattress Factory or venues like SPACE or Wood Street Galleries,” Conboy said. “However, in 2014, I was the recipient of Crusade for Art’s inaugural Audience Engagement Award of $10,000, which enabled me to found Start with Art: Pittsburgh. This enabled me to curate 12 artists in 2015 who would each make prints that would go home with approximately 275 babies born each month at three local hospitals (the Midwife Center, UPMC Mercy and St Clair Hospital). This way, I could now positively impact the lives of these children 18 years before they would ever step inside my classroom.”

Being responsible for selecting the artists who would participate in the program. Conboy does not feel bound to only chose established photographers.

“I looked for artists whose use of color, composition, texture, sound or even words could transfer to the photographic medium,” Conboy said. “As an example, I heard September’s artist, Anqwenique Wingfield (a classically trained opera and jazz singer), sing last summer at an event near my house. I was so in awe of her voice and its effect on me that I immediately introduced myself to her and told her that even though she had never used a camera, I had no doubt that her voice and emotion could be translated into two dimensions.”

In addition to his work on this project, Conboy indicated that he has something new in the works with RMU.

“The most exciting news is that the university and I will shortly be announcing a new initiative that will be a first for a university in the United States,” Conboy said.

All the pieces listed in addition to many others made it well worth my time to visit the exhibition. I especially liked that those in charge of the exhibit went to such care organizing the gallery, doing things such as a binder full of written descriptions of what was going on in each piece.

The exhibition is open from now until Oct. 27 at the Media Arts Gallery in Wheatley Center. Its hours are 11 a.m. to 3 p.m. on Tuesday, Wednesday and Friday, and from 11 a.m. to 7 p.m. on Thursday. I’d recommend all of my peers to check out the gallery, even if they can only go for a short time.