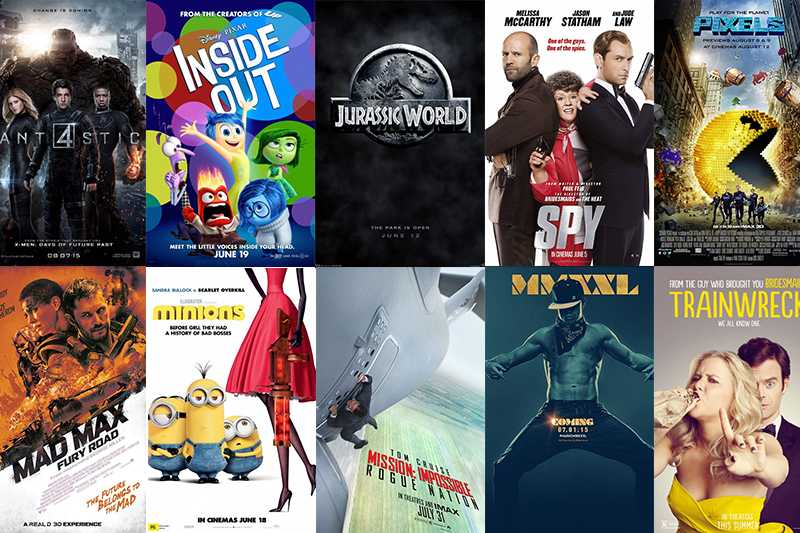 The summer movie season doesn’t officially end until Labor Day, but I don’t see much on the movie horizon until then, so I decided to jump the gun and prematurely release a list of the best and worst summer blockbusters. I would have to say this year’s crop of blockbuster films proved more enjoyable, and more successful than last years, of course, it wasn’t without its duds and disappointments. I always release my “Best Movies of The Year” list at the end of December, but by that time I have a limited number of spots and a whole lot of Oscar bait to fill them, and not enough room for summer fare, so that’s why this year I decided to provide you with this handy breakdown to the best and also the worst movies that came out over the summer.

The first comedy of the official summer movie season, Spy was a huge surprise for just about everyone who went to see it.  After a string of bad movies, Melissa McCarthy finally had a starring role as a smart, likeable woman, and surprise surprise, it worked out brilliantly for her. This fast pace, James Bond mockery provided some of the best insults ever dished out at the movies, and was definitely the best comedy to come out this summer. It had stiff competition with the likes of Ted 2 and Vacation, but in the end Spy just hit enough notes right to set itself apart from all the other R-rated comedies that hit theatres.

Believe me when I say I’m just as surprised as you are that these movies are still good. In the end I think a lot of it comes down to the fact that we all just love crazy Tom Cruise doing his own crazy Tom Cruise stunts. With a deviously fun plot that twists in turns virtually every second, Rogue Nation kept audiences on their toes and their eyes fixed to the screen in what ended up being one of the most thrilling and fun movies to watch in a while.

Pixar’s got the magic touch, I don’t think anyone would disagree there, but their latest movie Inside Out had something that was just a little more special than usual. A beautifully crafted, heartwarming story with a great message for kids and cast of characters that was both entertaining and genuine, Inside Out just got it right in what ended up being a movie that was as enjoyable to the adults as it was to children.

There were so many ways this movie could have gone wrong– the story is sort of ridiculous, it’s based off an old Mel Gibson movie a lot of people had never heard of, and the design and theme looks corny from the start – there was a lot working against Max when this movie came out in mid-May, but instead of being overly stylistic and obscure, it proved to be a hell of a lot of fun and really well crafted. The pulsating soundtrack strings together a variety of dynamic shots with scene after scene of beautifully designed, albeit, out there sets, costume and makeup, in what proved to be the definition of high octane filmmaking.

Okay, technically it’s not the best movie of the summer, but it was my favorite, which to me warrants its place at the top of this list. Sure, the story wasn’t perfect, but this record breaking box office smash was so much fun to watch I went to see it three times. Chris Pratt is the stuff dreams are made of and who doesn’t like watching dinosaurs kill things? Months later it’s still the movie I most fondly think of from this past summer, and for that reason, and that reason alone I put it at number one. You just can’t argue with a good time, after all isn’t that what summer blockbusters are all about?

Why anybody liked this movie is beyond me. I was a little late getting out to see it, and all I kept hearing was wonderful things, but when I actually took the time to commit two hours to Amy Schumer’s supposed summer hit, I was nothing but disappointed. This movie is your very average romantic comedy in every single way, except with a few off-putting jokes on Schumer’s part. Bill Hader was lame, LeBron James was lame, the story was lame, and everything about this movie was just down right lame. It wasn’t funny, it wasn’t a “game changer”, and more than anything, it definitely was not good.

I hate these little yellow creatures with a passion. For some reason somebody thought it was a good idea to put these irritating, nonsense speaking yellow mongrels in their own solo film, and the result was a disastrously boring and ridiculous movie that had me running to the nearest theatre exit. I know they’re supposed to be evil henchman, but the torture they dished out to audiences this summer was just a little too sadistic for my tastes.

You can always count on Adam Sandler to supply your yearly recommended dose of “horribly unfunny and particularly forgettable.” Pixels wasn’t a great concept to begin with, but the cast it was provided did it no favors. This movie just seemed to get more and more disappointing with every second, and it made me dis my beloved Peter Dinklage, which is something I can never forgive it for. It hurts watching anyone’s career die a slow and painful death, and unfortunately Pixels was just another nail in Adam Sandler’s coffin.

We’ve been spoiled with good superhero movies as of late, so sooner or later we were bound to get a bad one. Fantastic Four is that bad one. With its poorly paced and poorly written story, deadpan character and cheesy special effects, Fantastic Four failed to hit any of the high notes people were wishing for in this reboot of the tumultuous franchise. It’s tempting to place the blame on the Fantastic Four property itself, but I think this movie is just another classic example of a studio screwing up what could have been and should have been a cool story.

“On a scale of one to Magic Mike XXL, how bad was is?” That’s the grading system I now use to describe awful movies to people. As I ranted about in my lengthy review of this movie, I know everyone right off the bat thinks I hated this movie because its focus is on male strippers, I assure you however, that is not the least of my problem. Appalling dialogue, a crawling story, the worst lighting I’ve seen in any professional movie, and the most uninspired cinematography of the summer came together in this muscle-fueled-dumb-ass-fest about a group of unlikeable meatheads and their journey to a stripper convention. This movie redefined bad for me, and I swear that if they attempt to make a third movie in this hauntingly bad series, there is in fact no hope for the future of cinema.