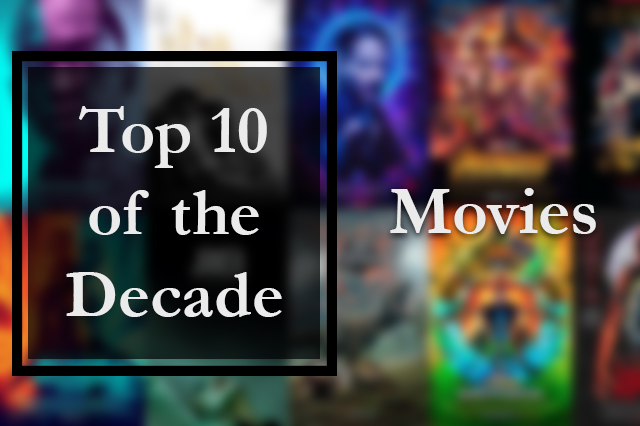 This past decade has been monumental for Hollywood by providing endless cult classics, innovative storytelling and more diverse representation on screen. All of these elements combined have caused the 2010s to be one of the best decades for cinema. However, 10 films have really stood out this past decade and have changed the movie industry forever.

It is difficult to determine which 10 movies of all the genres, ranging from independent films to studio funded productions, were the most impactful. There are many factors when examining lasting impact and the main aspects that are being used to determine the rankings of films are their popularity, the social impact, the effect it had on its genre, and the effect it had on cinematography, CGI, or animation.
10. “Mudbound” (2017)

“Mudbound” is set in the 1940s, focusing on a white family that buys a farm next to a black family. As they each struggle, the prejudices that are held against each other slowly fade away. However, just because the families learn to accept one another doesn’t mean society does the same. Both families deal with many issues and the audience sees how similar and different each family is. Two men of each family, who fought in World War II and are both dealing with PTSD, bond over their experiences mending the families. This unity doesn’t last for long as the ugliness of the times is shown when hate groups attack. These attacks make the audience uncomfortable and forces them to understand the severity of the past. This film made history by having the first woman, Rachel Morrison, be nominated for Best Cinematography at the 2017 Academy Awards. It also confronted racial subjects at a time when hate groups were on the rise again in America.
9. “Star Wars: The Force Awakens” (2015)

When it was announced that Disney would add to the “Star Wars” saga, most fans were apprehensive. The new storyline introduced Rey, a mysterious force-sensitive figure that had an unknown background. The series also brought back many beloved characters such as Luke Skywalker, Princess Leia and Han Solo. Despite having mixed reviews on each film, there is no denying that it has provided the fan base something to look forward to and given a breath of fresh air into the Star Wars series.
8. “Free Solo” (2018)

“Free Solo” was all that was talked about not only in the world of competitive rock climbing, but all throughout media. The film is about a professional climber attempting to climb El Capitan, one of the hardest climbs, without any safety equipment. This documentary was a thrilling piece that brought light to a sport that is not talked about often. It also made the audience consider what is ethical in order to achieve your dreams and some of the consequences that come with becoming reckless.
7. “Moonlight” (2017)

“Moonlight” is a story about a boy becoming a man while having to deal with struggles like his drug-addicted mother, bullies, his sexuality and being raised by the drug dealer that is selling the drugs his mother is abusing. This complex story shows the hardship that is placed on people of color and those in the LGBT community. It was beautifully captured and broke down multiple social barriers.

People were completely taken aback when it came to “Avengers: Infinity War,” as there were so many unanswered questions. “Avengers: Infinity War” brought together all our favorite Marvel superheroes for one epic battle against a common villain, but subverted expectations with it’s ending and set up the groundbreaking sequel. “Avengers Endgame” answered all of the questions the audience had, as well as serving as a beautiful ending to the beloved characters people have followed for years. “Endgame” truly made the superhero genre a respectable area of film that can captivate an audience just as well as any other genre of film.
5. “Get Out” (2017)

Jordan Peele’s horror-thriller took the world by storm when it first came out, providing a thought provoking take on the horror genre. Jordan Peele wasn’t afraid to display serious issues that we are currently facing in today’s society in his movie “Get Out.” The premise of the story is a white woman who is dating a black man who decides to take him home to meet her family. While they are there, he discovers something off about the family and their treatment of African Americans. Her family starts to attack him, forcing him to fight for his life. “Get Out” forces the audience to face social issues and understand the racism that still exists today.
4. “The Lighthouse” (2019)

Another movie released late in the decade is “The Lighthouse,” a story about what happens when lighthouse keepers slowly lose their sanity in the isolation of a lighthouse. This film was based on Edgar Allan Poe’s “The Light-House,” but the film itself is a more contemporary take on the story. The cinematography was what truly makes this film special. It was shot in black and white and is the type of film you really have to dissect each shot and its symbols to fully appreciate it. It is projected to be a contender for the 2019 Academy Award for best picture.
3. “Spiderman: Into the Spider-Verse” (2018)

Sony’s “Spiderman: Into the Spider-Verse” gives a much-needed breath of fresh air to the animation industry. It follows the story of Miles Morales, a teenager from New York who has to deal with going to a new school while also having to save the world with the help of other Spider-heroes from different universes. This film gives a lot of comedic value to a story that does have heavy topics and themes. The animation is what truly sets it apart from others is that they animated fewer frames in order to keep the comic book style. They also added texture that is most often found in pop art.
2. “Her” (2013)

“Her” was a beautifully shot and colored film that followed the story of a man right out of a divorce searching for meaning in his life while stumbling upon a new love, his computer system. It questions people’s perceptions of love and ever-advancing technology. It also makes the audience feel sympathy for those who have broken hearts seeking any sort of validation. The cinematography is straight-up amazing as each shot has meaning; no shot goes unused. The coloration of the movie was exceptional it made every single shot interesting causing the viewers to want to watch the film.
1. “1917” (2019)

Taking the number one spot on this list is the most recent film of the decade being released on December 25, 2019; “1917” was expected to be a remarkable film winning three Golden Globes just after its release. “1917” is a semi-fictional story of Alfred Mendes, the grandfather of director Sam Mendes, as he tries to deliver a message to other commanding officers in order to prevent an attack that would result in mass casualties. Sam Mendes filmed the entire story with long elaborate shots that helped the audience really feel the passage of time. The long shots were so seamless it felt as if it was once big choreographed dance with the camera. “1917” was beautifully written with no dull moments. “1917” wasn’t like most war movies, such as “Dunkirk” and “Saving Private Ryan,” as the cinematography was more elegant. This contrasted greatly with the chaotic surroundings, giving it a bittersweet appeal. This depiction of war displays how the conflict should and can be avoided. This film has a strong balance of popularity, social impact, and it is not afraid of breaking the genre’s norms with cinematography and powerful writing.