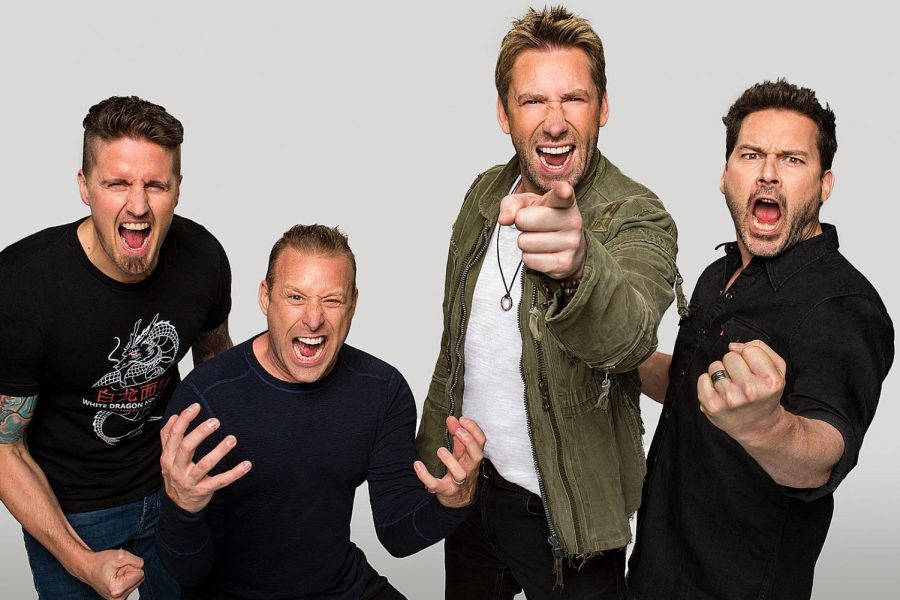 So, am I going to get a confession from you that you like Nickelback, or are you content with being a liar?

It is time to stop fooling ourselves and admit that the Canadian rock band was an instrumental (yeah, I meant to do that) part of our lives back in the early and mid 2000s.

Nowadays, the band is associated with a popular meme from their song “Photograph” that features an edited version of the song that states “Look at this…graph!”

President Trump even tweeted a version of the meme in an effort to call out Joe Biden and his son Hunter back in October of last year. To make this scenario even more ridiculous, Nickelback had the video blocked due to copyright. Yeah, we live in an interesting time.

But why has the band been resorted to nothing but endless jokes on the internet? 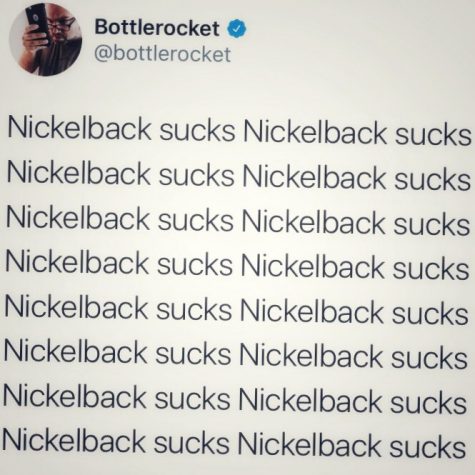 Nickelback had a run that most bands could only achieve in their sweetest of dreams, they cannot possibly deserve this disrespect!

In fact, I am willing to bet that your iPod Nano back in 2006 was stuffed with Nickelback songs as if it was a turkey on Thanksgiving.

If you think that I am overstating the significance of the band, here are some numbers for you to take in.

Nickelback had 19 songs reach the Billboard Hot 100. This wasn’t just a quick trip either, the band had songs chart on the list from 2001 all the way to 2011. That is a long time, folks.

Of those 19 songs, six reached the top 10. Surprisingly, only one of their tunes reached the top of the charts: “How You Remind Me”. The song spent 49 weeks in total on the Hot 100 and was later named the top single of 2002 by Billboard.

From an album standpoint, three reached the second spot on Billboard, though that wasn’t even their peak. All The Right Reasons, released in 2005, topped the charts in the United States (Others actually reached number one in the band’s native Canada previously). My mom came in with this CD, and I actually began hugging her out of gratitude when I realized what it was. Yeah, I will gladly have that factoid about myself on the internet for all eternity.

So, I think we can all agree, whether we like it or not, that Nickelback was pretty influential back in their day.

Disclaimer: While I do call some songs generic and criticize lyrics, I admit that in no way possible could I write better songs.

But now that I provided you with the facts, here are, in my opinion, the best Nickelback guilty pleasure songs.

When you think of a song built to play on rock radio, look no further than “Savin’ Me”. Despite the somber vibe that comes with the verses of the song, the chorus packs a punch that Mike Tyson would be jealous of. When the drums and guitar pick up in sync with singer Chad Kroeger’s voice, you can’t help but belt out the words of the chorus.

What makes this song a “guilty pleasure” in my mind is the simplicity of it. It is a very standard song with a very simple solo. Like most of the songs that Nickelback made, it sounded as if their main goal was for the song to chart on Billboard and get play on MTV/VH1. Fans of more technically sound bands probably shake at the thought of this song receiving adequate radio play back when it came out.

Post Malone, DaBaby and even Hannah Montana have released songs called “Rockstar”… but none of them hold a candle to this. While that might have been sarcastic, this Nickelback staple was unavoidable when it was released to the masses.

Again, the song itself is another very simplistic and features fun verses that build to an amped up chorus. Using this method, the band easily reels in the listener like a master angler out on Lake Erie and gets anyone within earshot to sing along with the chorus that fantasizes about living the life of a rockstar.

Was this Chad Kroeger singing about his life at the time? I like to think it is.

What also contributed to this song’s popularity was the cameo filled music video. Some of the cameos are from regular people that are poorly singing along with the words while simply enjoying their three seconds of fame, others get really into it and that might honestly be even funnier. Celebrity appearances by Wayne Gretzky, Gene Simmons, Chuck Liddell, Dale Earnhardt, Jr., Kid Rock and others never fail to make me laugh out loud due to the complete randomness of who pops up next.

Billy Gibbons of ZZ Top chimes in with spoken word style lyrics. I never quite understood why he is there, but I get a good laugh every time he sings about his desire to order a quesadilla.

All in all, this is a fun song that people shouldn’t be afraid to sing along with. Music is supposed to be fun and this song is just that.

Something about the playful electric guitar and Kroeger’s raspy voice singing “Never made it as a wise man” immediately pulls at my heartstrings. In signature fashion, Nickelback utilizes the “slow start and big chorus” method once again. The bridge is also very depressing and succeeds in getting your attention as the buildiup to the final chorus begins.

Don’t even get me started on that chorus…oh that chorus. Kroeger shows great emotion in his voice that fits in extremely well with the feeling the rest of the band is able to provide from their instruments. It is no wonder that this song became the band’s first real hit. Most serious Nickelback songs come off as corny and generic, but this song, to an extent, makes you feel the pain that Chad Kroeger is going through as he doubts his relationship. Okay, fine, some of it is still pretty lame.

Nickelback still cuts some corners. The majority of the chorus is simply yelling “Yeah” and a very dramatic “No no” over and over again. Lyrically, I enjoy the chorus, but come on. Between that and a very grizzled Chad Kroeger yelling about his regret for “Handing you a heart worth breaking” , it is a little cringy.

I am not trying to make fun of him for showing emotion, but is that the best we could come up with? You might disagree, but to me it is just odd to hear this, to that point, hard rock band saying something like that.

Personally, this might be my favorite song by the band. It isn’t the best guilty pleasure song, but you can’t tell me that this song slaps.

I love everything about this song. From the actual song to the music video, it is just fantastic.

While the music video only adds to the “guilty pleasure”, it isn’t the singular reason that it places so high on this list.

It is a party song by Nickelback. Like, that was the purpose of this song. To make it even better, the succeed with flying colors. Instead of wannabe cool guys at parties playing “Wonderwall”, they should be playing this song.

The jolly sound from the acoustic guitar to open the song immediately makes me want to call up the guys and start watching football and eating some good buffalo chicken dip in between cannonballs in the pool.

If you want to know how it is a guilty pleasure song, literally listen to it once. Kids were singing this song when it would come on the radio. Kids that 100% had no clue what the lines about “Cheech and Chong” meant along with other drug references.

The thought of Nickelback hosting a wild college pool party is pure hilarity as well because they were all OVER 30 when this came out. Imagine going to Super Saturday and seeing Chad Kroeger and his pals trying to hit on your girlfriend while playing this song…that is weird.

Now, the previously mentioned music video. The premise is that some nerds are throwing a party (They actually call themselves the “Nerd Brigade”).

One of the head honchos shows up in a van and guess who is zip-tied in the back…NICKELBACK. I am not sure if they were aware the Nickelback hate train had long left the station by this point, but the host of the party is very disappointed with the fact that this is the music for the evening.

Nickelback doesn’t file kidnapping charges but instead begins performing at a the house party. The party is hilarious and features people jumping off the house and into the pool, a naked guy riding a bike and riding it into the pool, and an appearance by the cops, one of which ends up stripping and the other gets scooped by a woman at the party.

At this fictional Nickelback party, the also have a part where everyone sings along for a very fun-filled bridge of the song. I’ll admit it, I never fail to sing along with this part.

The song is a wonderful guilty pleasure, but I would be remissed to not mention that music video as well. A double whammy, much like “Rockstar”.

In no way could another song possibly earn this spot. “Photograph” was one of the first songs I remember hearing on the radio as a kid, back when kids listened to the radio. “Photograph” was a staple in the music industry for what seemed like forever. The opening acoustic guitar riff is, and I can’t believe I am going to say this, one of the most recognizable of the last quarter century. When I gave my mom that hug for bringing home All The Right Reasons, it was because I knew “Photograph” was on it.

Even though this song is old enough to be in high school now, the nostalgic feeling of the song has been present since its release. How else is the line “Look at this photograph” supposed to make you feel? Even as a kid, I listened to this song and looked out the window in hopes of happier times, like recess. Man, I miss recess.

Combining that feeling of nostalgia with easy to follow lyrics that beg you to sing along, and you get one of the most popular songs of an entire decade.

As a young buck in Erie growing up, back when the hair on my head was even redder, I watched MTV (Remember MTV?) in hopes of seeing the music video for this song.

It is the perfect Nickelback guilty pleasure song. The lyrics are nostalgic but still sound pretty funny all of these years later. It is a great simplistic rock song and it encapsulates everything that Nickelback was: a band that had fun and made music fit for rock radio while not caring about what detractors had to say. I mean, why would you if you are worth $80 million dollars like Chad Kroeger?

The band knew their role and played it well.