RMU Proclamation: Championship or not, the Colonials still won 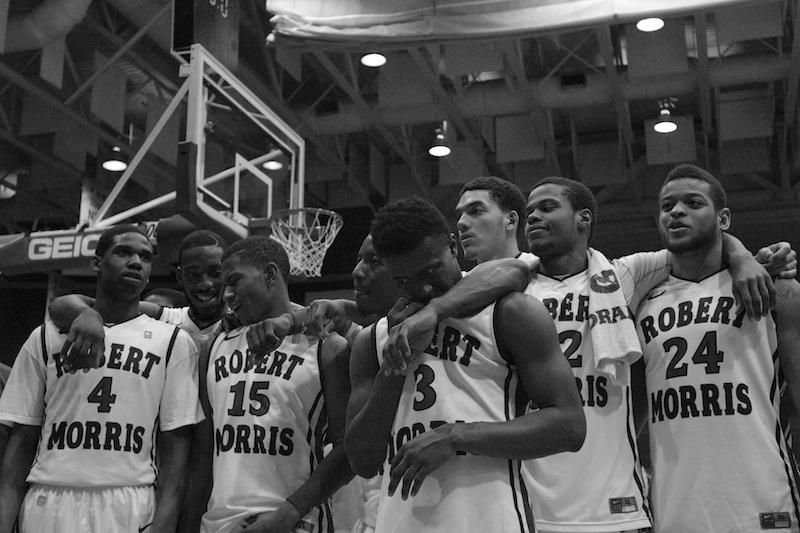 Normally, the recycled cliché gets tossed around every year in the world of sport. Whether it is the Seattle Seahawks in the NFL turning a pitiful team into a Super Bowl-winning machine in four years time or Virginia Commonwealth University making the Final Four three years ago, they are both examples of a “Cinderella story.”

None of the sort is even remotely close to what the Robert Morris University men’s basketball achieved this season. Nobody may ever replicate this kind of adversity and turn it into gold like Andy Toole, head coach, executed this year.

This team is special, and more importantly, their season in general is special.

Taking a look at the incoming class of freshmen and the inauguration of the 2013-14 season. Desjuan Newton, Jeremiah Worthem, Britton Lee, Kavon Stewart, Charles Oliver and Aaron Tate rounded the recruiting class for the Colonials.

After losing Russell Johnson, locker room-leader Treadwell Lewis and Velton Jones to graduation, Coron Williams and Lijah Thompson to a transfer, Robert Morris basketball was under many discussions of future-expectations. In fact, I went on record last year and said the 2013-14 campaign would not be very successful.

Boy, was I wrong.

Starting the year 5-10 in non-conference play didn’t help their cause to reach for the stars, and an NEC tournament championship, the first since 2010. During that stretch, RMU made their way to Lexington in order to complete the sequel to RMU vs. Kentucky.

An 87-49 shellacking took place in Rupp Arena, while the NEC Player of the Year only scored 16 points. For Anderson, that was below his yearly average of 19.0 points per game.

That sent a message throughout the locker room that changes neede to be made, at least from what the spectators saw on the court. Everything behind the scenes dealt with Coach Toole, his assistants, and the players. Nobody else knew what went on behind closed doors.

Post-January 4th, Toole did or said something to change the nature of pessimism around the anemic roster, because after January 4th, a change was made.

After January 4th, they only lost two games.

As wins came in bunches at the start of conference play, a new team was surfacing from the woodworks, a team that was expected from day one this season. At one point early on, RMU won seven-straight Northeast Conference match ups to start NEC play, marking a career-high for Toole.

There was nothing that stood in the Colonials’ way, until unfortunate events occurred that shook up the entire world of RMU basketball and athletics as a whole.

After forward Mike McFadden and guard Desjaun Newton both let the team to figure out their futures, the university suspended four players for violating policy, thus ending their season for the Colonials. Among the suspensions and departures, that left Toole with only eight players at his disposal.

Since the incident, eight players and a fantastic coaching star are now 11-2. All of the critics knew RMU still had a chance at an NEC title, but they didn’t think this would happen.

The only two losses included a heartbreaker against Central Connecticut State, in which they held an 18-point lead early in the second half, but dropped the contest by one. Their final loss came only a week ago at Wagner; a game that RMU didn’t need to win because they already clinched the first seed in the NEC tournament.

Their 14-2 mark is the best NEC record under Toole and with their regular season championship, that is the fifth time in the past seven years that Robert Morris accumulated the league’s best record.

All the statistic aside, that isn’t why the fans watch the game. They watch for the drama, climax, heart, passion, sweat, blood, tears and all the other elements added combine for a euphoric atmosphere of happiness and sadness.

It’s very simple that every game cannot be won. Eventually, Robert Morris will lose and end their season. For all the fan’s predictions, a departure in the NCAA Tournament would be ideal. According to CBSSports, the Colonials are projected to face Villanova in the first round.

What a story that would be. Maybe former head coach Mike Rice will watch the game from the top row of the arena.

The stars are aligning for a very successful season for the men’s squad. It could lead up to coach Toole finally getting the monkey off his back. Ultimately, his destiny includes an NEC Tournament victory and an appearance in the big dance.

Whether Cinderella appears or not, the 2013-14 campaign falls nothing short of a fairytale and the story will continue tomorrow against St. Francis (Pa).

In Wednesday’s quarterfinal, Anderson scored zero points. It was Lucky Jones and Anthony Myers-Pate carrying the load. That’s what makes this team special. If the NEC player of the year can’t score, his teammates pick up the slack.

Granted, there are only eight of them, they find a way to win. That’s one element of a winning basketball team. If they don’t win the NEC title, the season in and of itself, is a victory.

The Colonials are already winners.  However, the quest for gold isn’t over.

See you tomorrow at the Sewall Center.