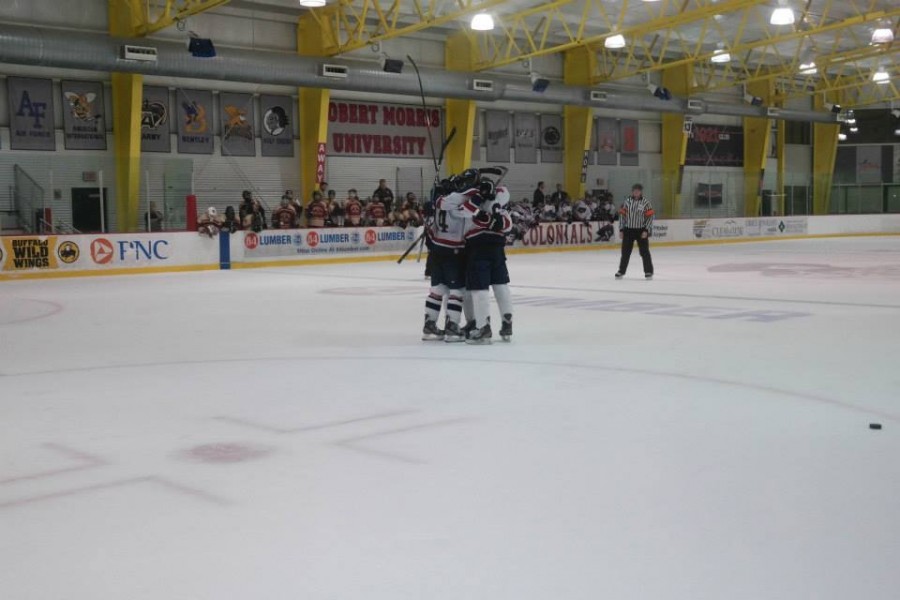 After defeating Mercyhurst, 4-3, in last season’s ACHA playoffs, the RMU ACHA DI hockey team looked to do the same to the Lakers Friday night at the Island Sports Center, knocking off MU, 5-3.

“It was a big game for us tonight, that a top 20 ranked team. They’re well known around rink and around the country for being a top team,” head coach Michael Joseph said. “We knew this was going to be a good yard stick, good measuring stick for us as to where we stood. And I was really pleased with what our guys put forward tonight.”

It didn’t go unnoticed when the Colonials took the ice that Joseph had assigned captains this week. Wes Heinle will be sporting the “C” on his sweater during the teams home games with Eric Barger and Eddie Sarin wearing the “A”. For away games Barger will have the “C” and Heinle and Sarin as his supporters.

“It’s very humbling,” Heinle said of this leadership role. “We have a great team, a great group of leaders, lots of good upperclassmen, and freshman who have all bought into the team and it’s very exciting to be part of that my senior year.”

The team came out strong in the first and jumped into an early lead with some of the new faces continuing to come up strong.

Just three minutes in, Carlos Quevedo-Biel would find the back of the net shorthanded. Halfway through Heinle put the Colonials up 2-0 with a little help from Joe Boyer.

The final goal came from Chris
Howland, the assists going to Alex Dagnal, and James Joyce. Giving the team a 3-0 lead after one.

“Every team has a different personality. We’ve done very well at getting out, scoring first in games, and that’s a nice quality to have,” Heinle said. “All we can keep doing is that game to game and we get better at holding leads, building on leads and keeping our foot on the pedal.”

Cody Brightbill came up with the fourth goal of the night at 15:06 and that would set the Colonials up 4-0. The second period would also start some penalty trouble for the Colonials, where they sent a man to the box four times.

The team held the Lakers off until the 3:30 maker where Kaleb Schwab would give the visitors their point of the night on the power play.

With the start the start of the third the team had a 4-1 lead, but Mercyhurst would quickly close the gap and capitalize on two of the six power players chance, making it a 4-3 game with 9:56 remain.

The Colonials would continue to hold their ground. Their gap would go back to a two goal lead at 5:42 and that would do it for the game, with Dagnal scoring off a pass from Joyce and Barger.

“We got a lot of freshman on the team this year, so it’s taken us a couple of weeks to get everyone in the right position, for everyone to learn their jobs, for everyone to know what they’re doing. We’re giving fore-check and scheme for running all those kind of things so we’re just starting to get to the point where guys are getting more comfortable with everything and we kind of saw some of that tonight, until we derailed ourselves in the second period with penalties, but fortunately the PK came through in a big way tonight.”