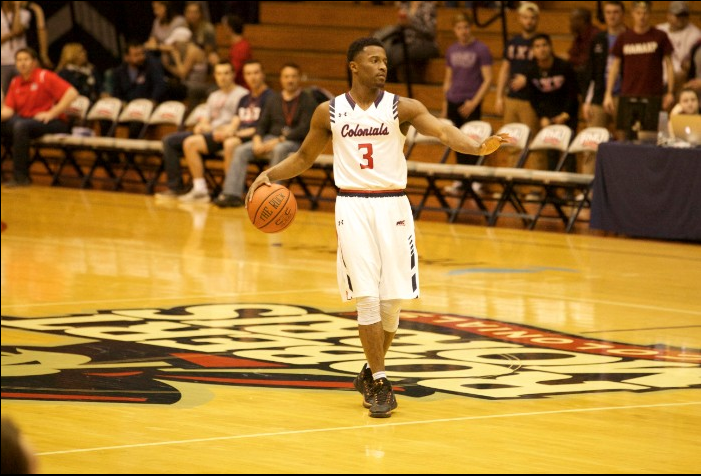 The Robert Morris men’s basketball team took the court Thursday to face the Fairleigh Dickinson Knights in a late-season Northeast Conference battle. The game was an important one with conference tournament seeding on the line.

The Colonials looked to finish out the month of February with wins in possibly their last two games ever at the Sewall Center. The latter will come on Saturday.

Both teams started out hot on the offensive side of the ball, trading buckets for most of the first 10 minutes. RMU immediately got set with a good tempo on offense that helped it create good looks from outside and in the paint.

Robert Morris adjusted on defense for the last 10 minutes of the first half, causing the FDU shooters to go cold — missing seven shots in a row from the field. This cleared the way for the Colonials to go on a 14-to-6 run during the last eight minutes to close out the half with a 39-34 lead.

The Colonials were able to build some momentum heading into the locker room, but the game was still up for grabs with both teams playing very well offensively.

When the second half started, Robert Morris turned it up a notch on defense and put a lot of pressure on the Knights. The Colonials caused 8 turnovers and held Fairleigh Dickinson to only nine points, helping extend their lead to 15 points with about 10 minutes to play.

A big Aaron Tate dunk brought the crowd to its feet, the home fans watching their team try to close out a big win. Time continued to tick off the clock, while RMU kept its momentum going on the offensive side of the ball by hitting back-to-back three-pointers.

With 4:25 left in the half Robert Morris led by a margin of 74-62. A 12-point lead with less than five minutes left in the game is a situation that most teams would be very optimistic about.

However, the Colonials have struggled to close out games this season, and the Knights took that as an opportunity to mount a huge comeback.

Free throw shooting plagued RMU towards the end of the game, only hitting 3-of-8 from the line in the final two minutes.

The Knights went 4-for-4 from the field and 5-of-5 from the charity stripe to get back into the game. Two missed free throws by the Colonials gave FDU an opportunity to win the game down by one.

What happened next will go down as somewhat controversial.

Malik Miller gathered the ball off of a missed shot and drilled the put back at the buzzer to seemingly give the Knights the win. The shot was close but after looking at the replay, the referees determined that Miller did not get the shot off in time, giving Robert Morris the narrow victory, 77-76.

The Colonials had one of their best offensive performances of the year and played great defense for 35 of the 40 total minutes.

RMU head coach Andy Toole was asked what he can do as a coach to correct this problem. “It’s a hard a thing to do, and it comes down maturity,” Toole said. “When you have a 10-to-12 point lead, you have to continue to play hard, if not harder.”

Toole said the Colonials need to stick to the game plan, no matter what the score might be.

“Everybody sees that scoreboard, but it’s all about that internal scoreboard, and guys need to stick to our formula despite the score,” said Toole.

Robert Morris will play its last regular season home game ever at the Charles L. Sewall Center on Saturday against Sacred Heart. Tip-off on Feb. 25 is scheduled for 3 p.m.