RMU Sentry Media takes a look at another exciting year in Robert Morris athletics and the five most intriguing and riveting headlines of the year. 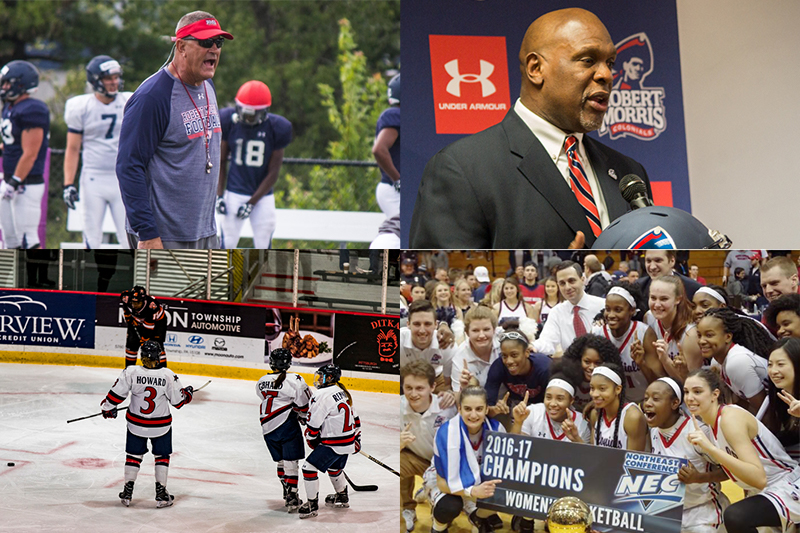 2017 has marked both brand new beginnings and some final goodbyes in the world of Robert Morris sports. New eras began for some teams while others finished in glorious fashion.

Banners were raised and walls were torn down, and the future of Robert Morris University changed forever. As the final days of 2017 tick down, let’s take a look at the top five headlines in a roller coaster year for Robert Morris athletics.
Number Five: Robert Morris football defeats Dayton for the first time in 17 years 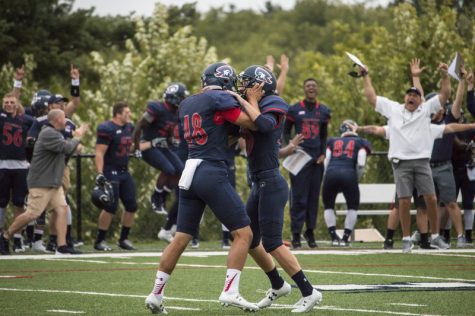 The annual Robert Morris-Dayton matchup had been a battle that for almost two decades felt like a battle in futility for the Robert Morris Colonials. And heading into the 2017 season, there was little reason to believe that the result would be any different. Dayton came into the season projected to finish second in their conference, while the Colonials were dubbed last place in the NEC preseason poll.

But with his job on the line (just wait until number two), John Banaszak put together an impressive defensive effort and enough offense that the team was able to open their campaign with a dramatic 13-10 win to cap off the first win against Dayton for every current member of the RMU coaching staff. The only member of the RMU football program who had even seen a victory over Dayton was head equipment manager Ray Butter.

Off the foot of freshman kicker Nick Bisceglia from 27 yards out, Robert Morris took a 13-10 lead with just four seconds remaining to seal the victory for the Colonials.

This game was important not just for the length of time it had been since the team beat Dayton. But for the first time in a long time for many Colonials fans, it felt as though there was a confidence about their football team. That the culture of RMU football had begun to change for the better. And while that confidence may not have lasted as long as many would have liked, this win was one for the books. 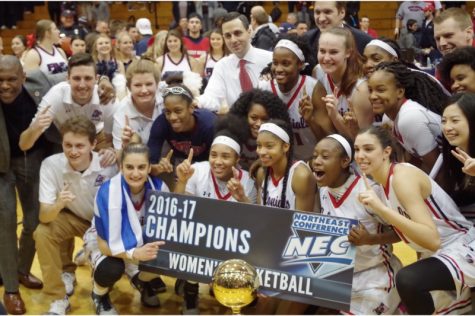 Anna-Niki Stamolamprou cemented her status as one of the greatest players in RMU women’s basketball history. The team’s second-leading scorer of all time ended her illustrious career raising the NEC championship trophy above her head in the team’s final game in the Charles L. Sewall Center. Stamolamprou would earn conference tournament MVP while helping her team earn the 16th seed in the NCAA tournament.

This season was full of excitement for not just Stamolamprou, but for first-year head coach Charlie Buscaglia, who was replacing his father at the head of RMU women’s basketball. Coach Buscaglia picked up right where his dad left off and earned the team their third conference title in the past four years.

Seniors Rebecca Navarro and Janee Brown joined Stamolamprou as one of the most memorable senior classes for Robert Morris. Navarro, known for her long-range shot, finished as one of the most prolific shooters in program history, while the consistency of Janee Brown earned her the number one spot on the all-time list for 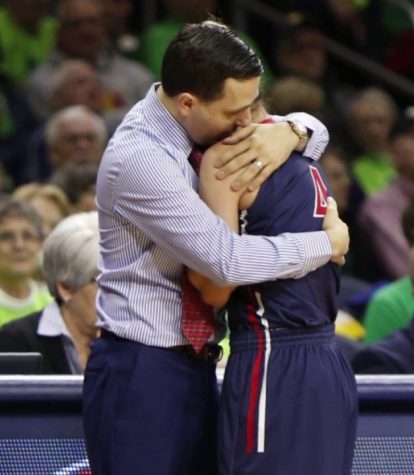 career starts, beginning the game on the court more than any other Colonial before her.

Robert Morris would end their season losing to the number-one seeded Notre Dame Fighting Irish as photographers would capture the emotional moment between Stamolamprou and her head coach as she left the court for the final time in her college career.
Number Three: Women’s hockey earns their first bid to NCAA tournament in program history 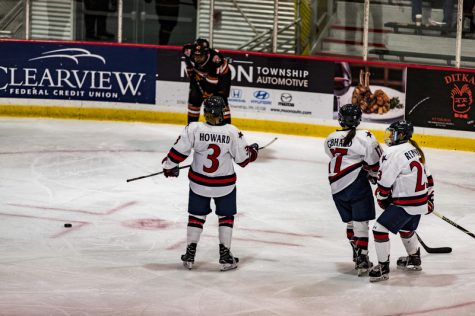 2017 was certainly a year to remember for head coach Paul Colontino and his Robert Morris women’s hockey team. The Colonials entered the year nationally ranked and remained ranked in at least one major poll each week for the entirety of 2017. But the biggest highlight for the Brittany Howard-led Robert Morris Colonials was winning the College Hockey America conference and the conference tournament en route to their first-ever NCAA Tournament appearance.

The Colonials saw impressive seasons from redshirt junior forward Brittany Howard, who claimed sole possession of the team’s all-time assist record, Jaycee Gebhard who would garner CHA rookie of the year and Jessica Dodds who overcame her past postseason struggles to claim MVP in the CHA tournament.

The team would have an early exit after a 7-0 defeat the hands of women’s hockey powerhouse Wisconsin. But the team has yet to miss a beat this season, ending Robert Morris hockey’s best year ever with their highest ranking in program history. The team now sits ranked ninth in the country after a tie with fourth-ranked Colgate.

2017 appeared to be the start of something truly special for the Colonials who are again leading their conference and appear poised for their second-straight NCAA tournament appearance.
Number Two: RMU football bids farewell to John Banaszak, welcomes Bernard Clark 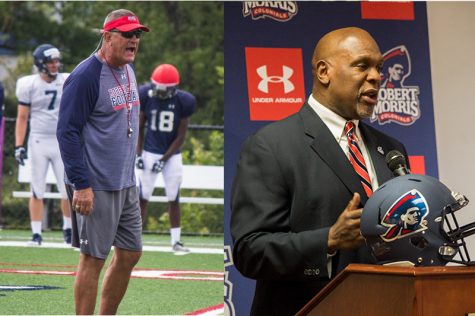 The most recent headline-grabbing Robert Morris news makes number two on the list as the Colonials attempt to change the culture of the locker room after four lackluster years from former RMU head coach John Banaszak, who stepped down at the end of the team’s most recent campaign. Banaszak amounted a 9-35 record in his time at the helm of RMU football while consistently having his offense place among the bottom ten teams in the country.

With Banaszak out of the picture, the team brought in Albany defensive coordinator Bernard Clark, a former NCAA national champion as a linebacker at the University of Miami who has transformed Albany’s defense into one of the best in the country.

Clark emphasized his desire to change the culture and mentality of this team from the very first moment he stepped up to the podium upon his introduction as the team’s third head coach in its history.

“The first thing I want to tell you is this, what I’m here to do is to build a foundation based on trust, honesty, discipline, integrity and character,” said Clark.

Clark said he plans to take a look at all the players, coaches and recruits before making any big personnel or team decisions. When spring ball begins in March of 2018, Colonials fans will get their first look at the new Bernard Clark era. Definitely, a headline to keep an eye on going into the new year.
Number One: Robert Morris announces the construction of the UPMC Events Center to be finished in January 2019 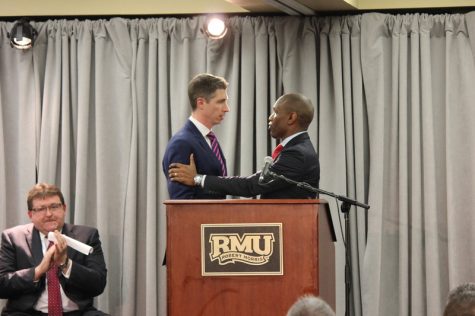 For years, there had been talks about a brand new, state-of-the-art basketball arena that Robert Morris University would use to propel their program as one of the best mid-major schools in college athletics. Well in 2017, RMU President Dr. Chris Howard finally made it official.

At a press conference on January 19, 2017, Dr. Howard stepped up to the podium and announced that starting in June of 2017, Robert Morris would begin the construction of both a brand new Recreation and Fitness center, but also the UPMC Events Center which would be built in the place of the Charles L. Sewall Center and become the new home for Robert Morris basketball and volleyball.

The excitement surrounding this news goes beyond just the arena itself but what it says about the future of the program. Robert Morris has been using this arena as a recruiting tool to bring in new and more impressive talent. The hope is that a better team that can draw even larger crowds in the new events center and potentially lead to a move into a more prestigious conference. This move would continue Robert Morris’ upward climb in their effort to become a powerhouse mid-major school similar to the likes of Gonzaga.

Robert Morris still needs the improvement in performance to justify the move, but with the new arena, the pieces are in place for one of the greatest eras of athletic success in the history of Robert Morris athletics. That is the reason why this story is 2017’s most intriguing and exciting headline in Robert Morris sports.