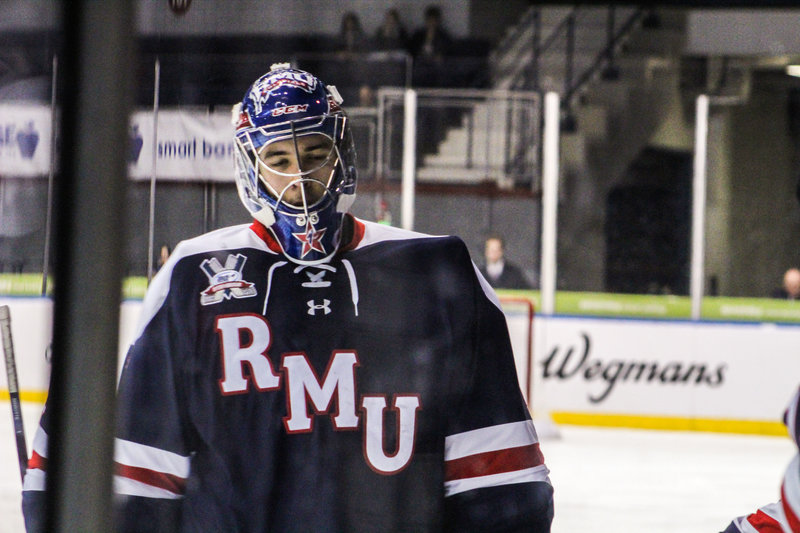 Everything you need to know: Atlantic Hockey Championship

RMU fell behind early and could never quite come back in a 5-1 defeat at the hands of the Air Force Falcons in the Atlantic Hockey Championship game.

Here’s everything you need to know.

The Air Force Falcons came out of the gates on fire and continued their solid play throughout the night. With three goals in the first period including two within the first three minutes of the game, the Falcons picked up right where they left off after their 3-0 victory of the Canisius Golden Griffins last night. The Falcons also played lockdown defense disrupting the Robert Morris shooting lanes.

This means that the Colonials season has come to a depressing end with their third consecutive loss in the AHC Championship game. As for the Air Force Falcons, they will advance to the NCAA tournament.

While the Falcons offense was strong throughout the game it was the Air Force defense that preserved the AHC Championship. Throughout the night the Falcons cut off shooting lanes. Whether it was using their sticks or their bodies, Air Force made it difficult for RMU to get high-quality shots in on goal.

A player who stumbled on the night was RMU goaltender Francis Marotte. Marotte gave up four goals in just over a period of play, resulting in the sophomore being pulled about five minutes into the second period. Marotte’s woes began almost immediately as he turned the puck over to Falcons forward Kyle Haak who put the puck in the back of the net before Marotte could return and establish himself in the goal.

Air Force goaltender Billy Christopoulos was a key performer for the Falcons throughout the night. Christopoulos was sharp and on his angles all night giving the Colonials very little to shoot at. Making a total of 35 saves on the evening.

The Falcons will head on to the NCAA tournament while the Colonials season comes to an end.