The Moon Tigers (1-3, 0-2) will travel to Chartiers Valley to take on the Colts (3-1, 0-1) for a conference match-up. The Tigers look to bounce back from a heartbreaking loss against the Baldwin Highlanders (3-1, 1-1). The Colts look to keep their momentum going after a win against the Norwin Knights (2-2, 1-1). 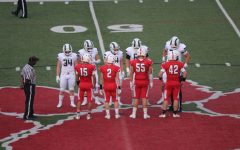 Powerhouse Pine Richland too much for Moon Tigers

Last Friday, the Colts defeated the Norwin Knights 28-24. They look to earn their first conference win at home against a struggling Tigers team as they fell to conference foe West Alleghany by the score of 41-7 back in week two.

Some Colts to look out for are Griffin Beatie and John Allen. Beatie is the junior quarterback for the Colts who have a strong presence in the pocket and can use his legs when needed. Allen is a senior wide receiver who uses his speed and height to threaten secondaries.

The Moon Tigers are coming off of a tough overtime loss against the Baldwin Highlanders. Moon dominated the game for a little more than two quarters, but the offense and defense for Baldwin showed up late in the third quarter and made multiple key plays to force the game into overtime. The game was decided on a third and 25 when Mason Stahl floated a pass to a wide-open Naseer Peen for a touchdown to seal the game. The result was the Highlanders winning 48-42.

Some Tigers to look out for are Dante Clay and Christian Tanner. Clay is the junior quarterback for the Tigers who bounced back after an ugly performance against Pine Richland (3-1, 2-0) to have two touchdowns while making many key plays that was instrumental in keeping things close. Tanner is a senior linebacker who, yet again, had a dominant defensive performance. Tanner had a 55-yard interception return for a touchdown and had a tackle total up in the double digits.

This game will be an offensive showdown and should be a high scoring affair. Don’t be surprised if both teams combine for eight or more total touchdowns.