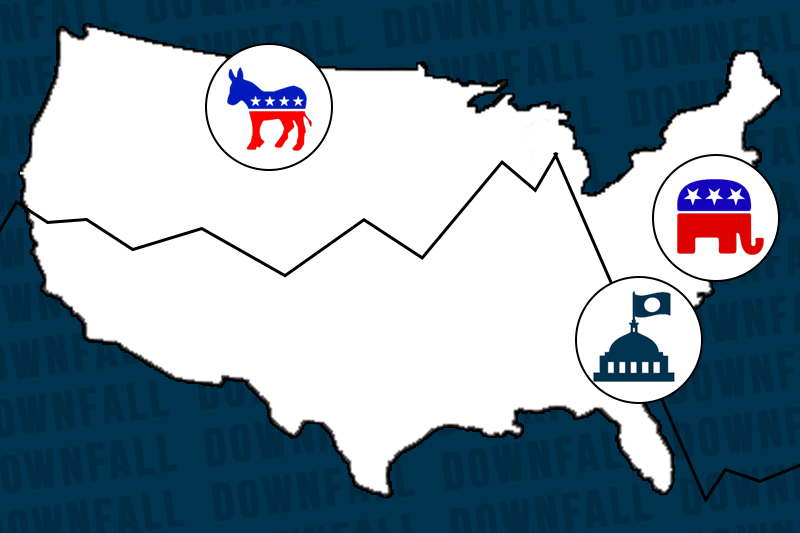 On Aug. 12, 2017, the alt-right held a rally in Charlottesville, Va. Within one night, this college town became the center of a heated debate, centering around one word: justice. As white nationalists flooded the streets, many, including myself, asked how America got to this point. How is it that a country supposedly based on principles of equality and freedom can be filled with so much hatred? Of course, America has a dark past. In fact, remnants of that time, as shown by the Charlottesville rally, have survived to the present day.

However, shouldn’t our so-called progressive society be better than it was in the past? Shouldn’t there be more accepting people? If people are more accepting or at least supposed to be, why is it that those extremists on the fringes of society are able to grab hold of the nation? Why are they becoming the norm? I believe there is an answer to these small but complex questions. The increase in power and visibility of these hate groups is due, at least in part, to political apathy. More specifically, those who, politically speaking, are too optimistic or too pessimistic encourage an environment of injustice.

To begin, the overly optimistic are those who are too confident in the goodness of mankind in relation to political struggles. These people share the belief that everything will work out in the end, no matter how dire the situation may seem. Jane Gillham, Andrew Shatte, Karen Reivich and Martin Seligman provide a useful definition in their “Optimism, Pessimism, and Explanatory Style.”

According to them, “People are optimistic when they attribute problems in their lives to temporary, specific, and external … causes.”

At this point, some of you are probably wondering what the big deal is. It is good to think positively about our struggles, right? Well, that is half right. It is not healthy to walk around in perpetual sadness, moaning about how bad things are. However, it is not good to just sit around and wait for change either. Optimism can be a very useful tool to deal with various issues in our own lives. It is when those problems get larger and more complex that we run into trouble.

Take, for instance, J. R. R. Tolkien’s novel, “The Lord of the Rings.” Yes, I know this is a fictional book and there are not many of us forsaking our daily obligations to chase after scary wizards. Nevertheless, this novel is a good example of how optimism should be used. In this lovable tale, Frodo and his adventurous companions embark on a long journey to destroy a dangerous ring. Optimism was essential for them because it gave them motivation. They knew that things could get better, so they did not give up. However, optimism was not the solution; it was the first step in their quest to fight evil. Frodo and his friends had optimism, but they also understood the need for action. Likewise, as Americans, we must back up our optimism with action. How can injustice disappear if we don’t do anything to support the oppressed? What good does ignorance do? Ignoring societal issues does not make society better off.

On the opposite side of the spectrum, there are those who are overly pessimistic. People in this group see no good in the world or in the current political system.

According to Merriam-Webster, pessimism is “an inclination to emphasize adverse aspects, conditions, and possibilities or to expect the worst possible outcome.”

In other words, people belonging to this group see the negativity in the world but don’t think their actions can help to better it. While political pessimism can manifest itself in a number of ways, one of the clearest examples is voting.

According to the Pew Research Center, “Tens of millions of registered voters did not cast a ballot in the 2016 Presidential election.”

More specifically, 25 percent of those polled did not vote because they disliked the candidate or issues discussed and 15 percent didn’t vote because they lacked interest or felt their vote didn’t matter. These results are very alarming because a large portion of American voices were not heard. If all of the people who chose not to vote actually voted, the results of the 2016 election could have been very different. I am not going to argue whether different results would be a good or a bad thing, but I do think it is clear that voting has a huge impact on the political environment. Looking at individual ballots, it may seem that individual voices get drowned out by the masses. However, when everyone who thinks their vote is worthless votes, there are literally millions of votes that were not present before.

There are some reading this who may be thinking that pessimism has its benefits. In some cases, that is true. Pessimism helps us make cautious decisions on a daily basis. However, like optimism, pessimism must be used as a catalyst for action. Consider the Civil Rights Movement for a moment. The African-American community definitely experienced a bit of pessimism; they knew that the system was flawed in its policy towards minorities. However, they did not sit around moping. Rather, they used that discontent to spark a movement for equality. Consequently, by standing around and lamenting about the lack of change, we prevent any change from coming.

Now that the dangers of both optimism and pessimism have been discussed, it’s time to talk about what we as Americans should actually be doing. If optimism isn’t ideal and pessimism isn’t ideal, what’s left to be ideal? In order to successfully confront modern-day issues, we must find a middle ground. In this situation, it is helpful to look to the classical Greek philosopher, Aristotle.

According to the Stanford Encyclopedia of Philosophy, for Aristotle, “every ethical virtue is a condition intermediate … between two other states, one involving excess, and the other deficiency.”

Following this model of Nicomachean ethics, it is virtuous to balance optimism and pessimism. What does this look like? It’s recognizing when things aren’t right and, at the same time, understanding that they can get better. To take this a step further, we must also acknowledge the importance of action. Once we see that things aren’t right and that our situation can get better, it is our responsibility to work towards improving our situations. This is what happened with the Women’s Suffrage Movement. Women realized that they should be given the right to vote, they believed that it could happen, and then they went about getting that right. Similarly, in order to address our current political issues, we must work for a solution.

Overall, now is not the time to stay quiet on the sidelines. As controversies grow and people are denied what many of us consider to be basic rights, it is increasingly more dangerous to be passive. Although it can be uncomfortable, it is imperative that Americans learn to point out the ugliness in our society and fix it. When we stand around pretending that problems do not exist or when we stand around complaining about them, nothing actually gets done. If America is truly to become the country it was destined to be, we all have to take a part in its development.