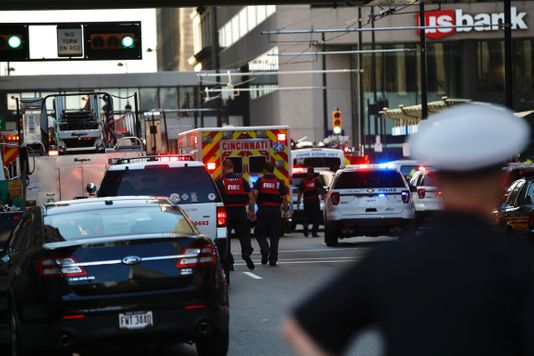 Four people are dead, including the gunman, following an active shooting at a downtown Cincinnati building.

Terrible shooting incident in the heart of our city this morning. Multiple shot, and tragically there are fatalities. Details still emerging. Pray for our city.

There was a senseless act of gun violence on the streets of Cincinnati this morning. I’ve spoken with the Mayor and informed him the state will provide any necessary resources to the local police. 1/

According to USA Today, the shooting occurred at Cincinnati’s Fifth Third Center in Fountain Square, a place for dining and entertainment in the city. Four out of the five wounded were transported to the University of Cincinnati Medical Center.

According to Sittenfeld, there was no motive that could be determined shortly after the shooting.

Witness Leonard Cain said he heard approximately 15 gunshots and believed at least three people were wounded. Cain was walking inside the bank when someone warned him of the shooting.

A woman was also warned but entered the bank and was shot.

“Terrible shooting incident in the of our city this morning,” Sittenfeld tweeted. “Multiple shot, and tragically there are fatalities. Details still emerging. Pray for our city.”

The situation was monitored by Gov. John Kasich and Ohio Senators Rob Portman and Sherrod Brown.

“There was a senseless act of violence on the streets of Cincinnati this morning,” Kasich said.