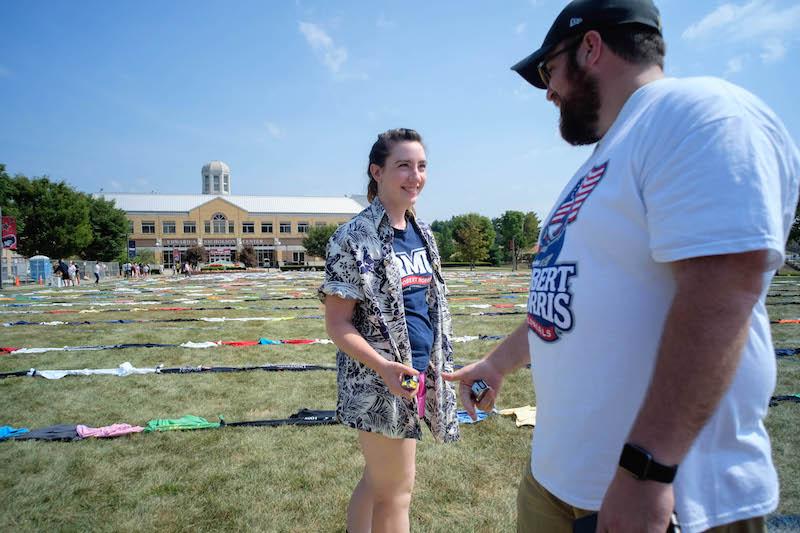 RMU students, lead by Merritt Donoghue, set the world record Saturday August 28th for longest chain of teeshirts tied together. Students worked from 10:00 AM to 1:00 PM to create a 6372 ft 51/2 in chain of teeshirts consisting of 2534 individual teeshirts. The shirts will be donated to a local homeless shelter.

Students and faculty all across the Robert Morris University campus were able to put their old t-shirts to use yesterday on the Nicholson lawn. RMU came together as the university broke the Guinness World Record for “The World’s Longest Chain of T-Shirts.”

John Locke and Merritt Donoghue along with other members of Student Life came up with the idea to break the record. On Saturday their plan was put into action. Students alongside Student Life started around ten o’clock assembling t-shirts. At the end of the three hour process the chain was complete. As the shirts were disassembled, they got ready to donate them to Shepherd’s Heart Fellowship, a local homeless shelter. John Locke couldn’t have been more thrilled that the whole plan came together.

“Happiness is the distance between expectations and reality,” Locke said. “This far exceeds my expectations.”

Locke didn’t just want to break the record. He wanted to make it untouchable to other universities.

“Our goal is to not only set the record, but to have the record be so big that the next school that thinks about doing it is like ‘never mind too impressive,’” Locke said.

Merritt Donoghue, one of the class of 2017 officers, came to Locke with the idea in the summer as a way to help fulfill her role as a leader.

“I honestly walked into his office on a Tuesday morning and was like ‘John, I want to break a record like let’s do this’ and he was like ‘All right let’s go’.” Donoghue explained.

Their original idea of “World’s Longest Line of People Waiting for T-Shirts,” unfortunately did not exist. Guinness then told them about their chain record, and immediately the officers went into action.

“It’s great that we’re doing a world record,” Donoghue said. “But the fact that we’re donating all these t-shirts to a homeless shelter is even better.”

As for future world records? All Locke had to say on the subject was to “stay tuned.”

Donoghue also didn’t reveal too much on the matter.

“We’re trying to think of something different for next year,” Donoghue said. “We want to start making this a tradition at RMU.”

Donoghue and Locke immediately announced that the record had been broken once it was official, thanking everyone involved for their time, effort, and shirts. It was later confirmed through Locke’s Twitter that his original goal of making the chain long enough to reach Wendy’s was also achieved.