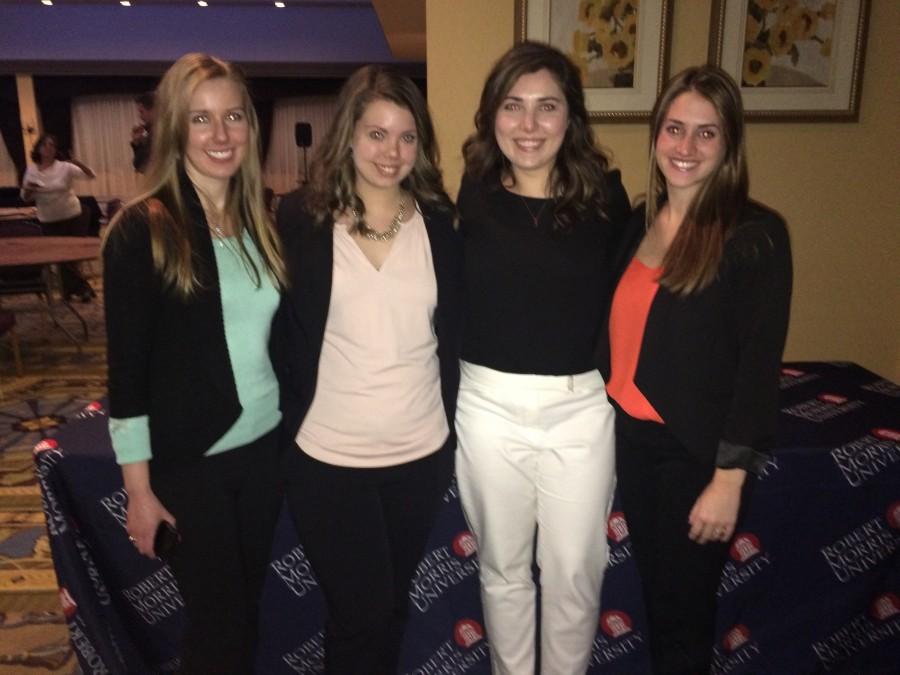 When it came time to pitch an event for her Communication Seminar class, Jannah Jablonowski wanted to do something different rather than simply hosting an affair to raise money for a charity.

After helping organize the course’s networking event, Making Connections, in the spring through her association with the Robert Morris Public Relations Society, Jablonowski and her colleagues – Shannon Hancherick, Danielle Banas and Meghan Kane – were approached by Dr. Ann Jabro about the possibility of organizing the event for their final assignment.

“Shannon and I helped out last year as part of our involvement in the PR Society and wanted to plan something wonderful for our peers that could ultimately help them form relationships with interested employers,” said Jablowonski, a senior. “And because of this, we felt like it would be a great way to help our classmates.”

Before they could begin to plan the reception, which was held in Yorktown’s Ferris Ballroom on Dec. 5, the group had to first track down Robert Morris graduates that would be willing to participate.

This is where Mary Gerard, the Office of Institutional Advancement’s Assistant Director of Alumni Relations, came in.

With Gerard’s help, the group – nicknamed Compass Communications – contacted a pool of alumni, most of whom were very willing to help out.

Even though Brian Lang completed his undergraduate degree at the University of Pittsburgh in Economics, the Hill, Barth & King LLC manager said he feels a stronger connection with the individuals he met in his master’s classes at RMU downtown, rather than those from Pitt.

The three main components of the affair were a networking reception, followed by one-on-one consultations designed to simulate a job interview and a debriefing session informing students of their strengths and weaknesses.

“I was a little unsure of what to expect since I hadn’t really been to a networking event before,” said senior Communication major Kyle Gorcey. “But I feel that the practice interviews were, by far, the best aspect of the evening since it provided me with another opportunity to hone my skills before I begin applying for jobs.”

Looking back, Jablonowski is confident that the work she and her team put in can ultimately guide fellow students in the right direction.

“Everyone seemed to be enjoying themselves, from the students to the alumni, and receiving all of the positive feedback really made this worthwhile,” she said. “It means a lot to me knowing that the work we put in to organizing this can potentially help one of our classmates land an entry-level position.”