“They thought I came from a 10-hour flight somewhere else because they weren’t too sure where Canada was located. They made me feel really international, but I felt that I was just a border across.”

Mikalah Mulrain said it best. We, as students at Robert Morris, think that Canada is a far away place, even though it is closer to Pittsburgh than cities like Philadelphia and New York City. It is difficult to understand why people from Canada decide to attend Robert Morris, but in most cases, Toronto is closer than you may realize.

The women’s basketball team prides themselves on being a tight-knit group, regardless of the amount of international players on their team. Megan Smith said picking the Colonials was easy because she “really liked how inviting the girls were on the team and how nice the coaches were.” She also “really liked the international feel.”

“Every day is different,” said Smith, smiling. “One of the great things about having international students on the team is that you get to learn about so many different cultures.” Obviously, playing with players from different countries is a unique experience each day.

This year, four international freshman students play for the Colonials and have found different ways to contribute. Mulrain and Smith use their previous three years at RMU to help guide the newcomers this season.

“It takes time to adjust and learn to adapt to their different cultures,” said Mulrain. Smith also told the freshmen that the seniors are there to look out for them too. “We’ve always told them that it’s alright to be homesick … if you’re having a bad day, you can come and talk to us.”

Forwards Megan Smith and Mikalah Mulrain lead the front-court for our women’s basketball team. Smith is a physical forward who has tallied over 600 rebounds through her four years at Robert Morris. She prides herself as a hard worker and is by far one of the most physical and toughest players on the court at all times. “I’m really competitive, so I think that’s where my rebounds come in,” Smith said.

Mulrain is a tall, mobile center with over 150 blocks. Although Mulrain never really pays attention to stats and records, her teammate, senior guard Jocelynne Jones, makes sure to tell her when she is about to break a record.

“Jocelynne Jones has been telling me every week that I keep moving up.” Apparently, Jones cares about her teammates breaking important records. Mulrain does not credit her size for blocking shots, but blocking as more of a mental game. “I think (blocking shots) is all about timing and knowing the right time to get in there to block shots.”

Although the team is close and play well together, the current juniors and seniors had to go through a coaching change after the 2015-16 season. “I thought it was a really smooth transition,” Smith said. “Coach B pretty much coached our team 2015-16 season.”

Smith and Mulrain both hail from the Toronto, Ontario region. Both players played with Team Toronto in 2011 and 2012 before committing to Robert Morris for their freshman year. Mulrain and Smith had played against each other through the years in Toronto, and Mulrain said it was better to play on the same team as her.

“I found out that [Smith] was actually nice. She used to look scary in my eyes … I used to see her on the court and be creeped out,” said Mulrain. Obviously, Mulrain does not have to worry about playing against Smith anymore.

Even though these two players only come from Canada, they still contribute to the extremely diverse team that the Colonials play with each and every game. The years these girls spend with each other is a truly unique experience that they may never experience again. Smith and Mulrain have been, and will continue to be, leaders on this team until their final game at Robert Morris. The team has had success this year, and these seniors seem to be paving their way to a third consecutive trip to the NCAA Tournament. 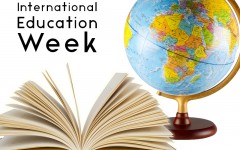